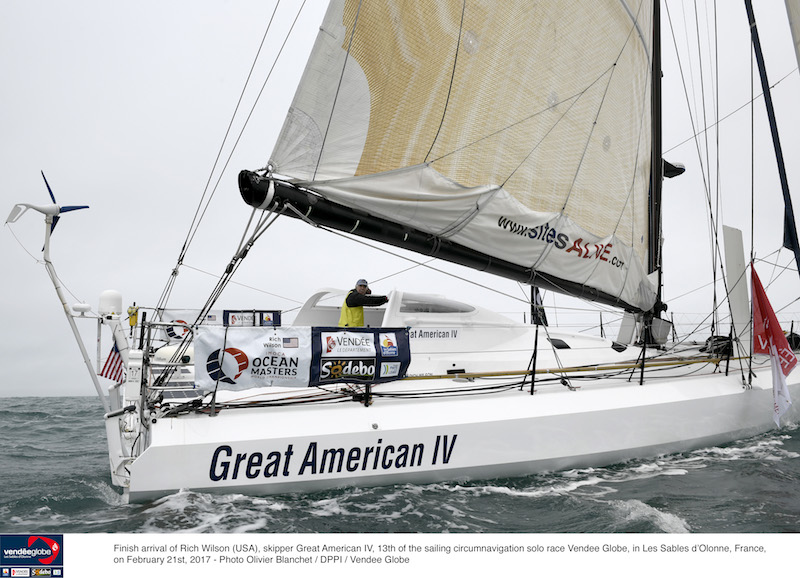 American skipper Rich Wilson crossed the finish line of the Vendée Globe solo round the world race off Les Sables d'Olonne on the west coast of France this afternoon (Tuesday 21/02) at 1250hrs UTC. From the fleet of 29 boats which started the 27,440 miles singlehanded race from Les Sables d'Olonne on Sunday November 6th, Wilson and Great American IV secure 13th place in an elapsed time of 107 days 48 mins 18 secs.

Wilson, at 66 years old the oldest skipper in the race, successfully completes the pinnacle solo ocean racing event for the second time. He improves his time for the 2008-9 edition of the race, 121 days and 41 minutes by a fortnight, thereby achieving one of the key goals which drew him back to take on the race for a second time. Whilst racing he also delivered a daily, multi faceted educational programme to over 750,000 young people in more than 55 different countries around the world, another of the fundamental reasons Wilson returned to the Vendée Globe. He becomes the fastest American to race solo non stop around the world, beating the 2004-5 record of Bruce Schwab of 109 days 19 hours.

The hugely experienced American skipper who is a lifelong mariner and a native of Boston, Massachusetts, adds to a remarkable catalogue of achievements under sail over an extraordinary career spanning nearly 40 years, including three record passages including San Francisco to Boston in 1993, New York to Melbourne in 2001, and in 2003 Hong Kong to New York.

Wilson crossed the finish line on a cool February afternoon, emerging from the grey skies of the Bay of Biscay, with scarcely a rope out of place. His Great American IV returned to Les Sables d'Olonne in almost exactly the same, near perfect condition as they left in early November. Wilsonhas dealt competently with a range of small technical problems, notably gripes with his autopilot system, his hydrogenerator system and some modest sail repairs. To finish two Vendée Globe races with both of his boats in great condition is testament to his impeccable seamanship, his ongoing focus and discipline to stay within the prudent protocols he sets himself, looking to achieve high average speeds and sail very efficiently while keeping the skipper and his boat safe. The efficiency of his actual course, that is how direct a route he sailed, is almost exactly the same as that of race winner Armel Le Cléac'h – sailing around 27,450 miles and is only bettered by the fourth to sixth placed skippers Jéremie Beyou, Yann Eliès and Jean Le Cam who sailed around 300 miles less.

Wilson is in no way a crusader looking to prove a point about the capabilities or achievements of older solo racers or athletes. Suffering from asthma since he was an infant, he has also considered age a mere number but strove to be as fit and strong as he could be prior to both races. ‘I am not ready for the pipe and slippers. Age is just a number.' Wilson said many times before the start. That said his success today will be a huge inspiration to older people around the world to pursue their dreams and follow their passions. His boat for this edition of the race, an Owen-Clarke design which raced to seventh with Dominique Wavre in 2012-13, is faster but more physical than Great American III.

Along the route Wilson has told the story of his race with clarity and passion, his educated and inquisitive mind ensuring topics have remained interesting and informative with a broad appeal to all ages. A former maths teacher he has graduate degrees from Harvard Business School and MIT and a college degree from Harvard. He enjoyed regular communication with many of the other skippers in the race, most of all Alan Roura, the Swiss 23 year old youngest racer who finished yesterday.

7th Nov: Replacement of a batten car on the main mast track, sailed with conservative sail selection not wanting to make a mistake while tired. Hydrogenerator propeller pitch control pump leaked all of its hydraulic oil into the box.
12th Nov: In a squall the boat took off, and then the autopilot decided to stop. So the boat turned up toward the wind, and lay over at about 45 degrees, with both sails flapping. I rushed into the cockpit and grabbed the tiller. Unidentified autopilot problem fixed.
17th Nov: First part of the Doldrums further north than was predicted. Sudden squalls.
19th Nov: At 0450, Great American IV crossed the Equator. 12th crossing under sail for Rich.
24th Nov: Getting to know the boat well. Gained miles on those ahead. Nice chat with Tanguy de Lamotte.
1st Dec: Peak speed of 24.7 knots. “I don't understand how the leaders can deal with the speeds, and the stress that comes with them”
6th Dec: Entered the Indian Ocean. More Work on the Hydrogenerator
9th Dec: Chats with Alan Roura, and with Eric Bellion. ‘The three multi-generational amigos, me at 66, Eric at 40, and Alan at 23'

13th Dec: “Pushing very hard to get east across the top of the Kerguelen Shelf before the big depression gets here in 36 hours. Our plan is to then head southeast to get to where the strong winds will be. Eric has chosen a north route, Alan and Enda look as though they are working on a similar plan to mine.”
15th Dec: Average of 45 knots wind for a 16 hour period, and our thundering sprints of boat speed from 10-12 knots into the mid-20s, ricocheting off waves
20th Dec: “Interesting encounter last night with Enda O'Coineen”
21st Dec: “Fantastic encounter today when my friend Eric Bellion came roaring up from behind us and passed us close aboard”
25th Dec: “We are a long way from home, and have a long way to go. Usually in my voyages, I haven't gotten too lonely. But today I did. I'm sure it was exacerbated by the big depression that is forecast to develop ahead of us.”
31st Dec: Crossing the International Date Line
1st Jan: “We are in the gale. We have 35-40 knots of wind now and it looks as though this will last for another 18 hours. The violence that the sea can heap on a boat is not describable.”
5th Jan: “the nicest day of sailing that we've had in one might say months”
7th Jan: Exactly halfway
13th Jan: “We were in the bulls-eye of the strong winds for the depression. Solent to staysail to storm jib, and 1 reef to 2 reefs to 3 reefs in the mainsail.” Autopilot malfunction.
17th Jan: Cape Horn
18th Jan: “We went west of the Falkland Islands, behind Alan Roura, who followed through the Lemaire Strait”
22nd Jan: “A very bad night last night. We had 35 knots of north, steady, up to 38, which created a big wave situation, with cresting seas 12-15′ high. This went on most of the afternoon. And then suddenly, nothing. The physicality of this boat is beyond description, and I am exhausted and, frankly, demoralized.”
25th Jan: “We just got clobbered through the night, with 30 knots of wind, upwind, into the big building seas, and crashing and crashing and crashing. The conditions are just chaotic. There is really nothing you can do on the boat, because you just have to be holding on at all times.”
29th Jan: “Latitude of Rio de Janeiro. Southwest winds, 2 – 3 knots, very bizarre. The boat went in circles for 3 hours, and it was very frustrating.”
5th Feb: back into the Northern Hemisphere
7th Feb: finally into the NE'ly trade winds
16th Feb: sailed close to Faial in the Azores.
21st Feb: finished

“It's great to be back. To see France and all the French people here. It was great to see Eric (Bellion) and Alan (Roura) here. They were my brothers in the south. We talked almost every day by e-mail. In this race I think there was a lot more communication between the skippers than in 2008-2009 – Koji, Fabrice, Nandor, Stéphane and Didac who was chasing me. We talked about everything in the world. It was a little bit harder, because I'm older. The boat was easier because of the ballast tanks. You can use the ballast rather than put in a reef all the time, which is what I had to do on the other boat. What distinguished the race for me was that it was grey all the way. Across the south and then all the way up the Atlantic. Grey. Grey. It was so depressing. Four or five days ago, the sun came out for twenty minutes and I leapt out and stuck my face and hands under the sun. It was grey and just for so long. That was hard.”

“I found all the calms that exist in the Atlantic. It was never-ending in the Atlantic. Eight years ago, I said never again. But now it's too difficult. This is the perfect race course. The most stimulating event that exists. My goal was to finish this race and to work for SitesAlive, which has 700,000 young people following. What is fantastic about this race is the support of the public with all the people here. I remember the first time, someone said, if you finish the race, you're a winner. I think that is correct. I could give you a quotation from Thomas Jefferson. When he was ambassador to France, he said everyone has two countries, their own and France and I think that is true.”

“The Vendée Globe is two Vendée Globes. It is very long. The oceans, the capes. It's all very hard. But the other Vendée Globe is the one ashore. The welcome that our team and I have had here. It's incredible. I felt older. I am 66! My thoughts go out to Nandor who finished two weeks ago at the age of 65. We sent back data each day concerning me and the boat. Each day, I did an average of 12,000 turns on the winch. But it was hard.”

“The worst thing was it was so grey. I had a map of the stars with me but I couldn't use it. The best thing was communicating with the others. We're a real community.”