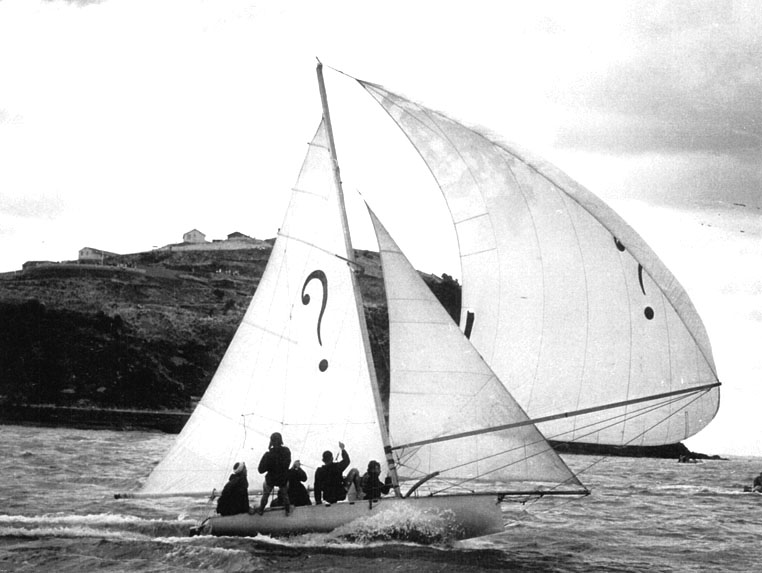 The team came within one point of the 2016 winner, Smeg, and are determined to go that one better this year. It would be a massive boost for the kiwis, who haven’t tasted success in the world’s premier event for 43 years.

Statistics don’t always reflect the true position of an overall situation.  New Zealand have won only seven of the 67 JJ Giltinan World 18ft Skiff Championship regattas contested to 2016, the last win by a New Zealand team was in 1974, and no Kiwi team has yet won a championship regatta on Sydney Harbour.

On the surface, certainly not all that impressive, but to dismiss the contribution of New Zealand individuals and teams over the 78-year period since the first regatta on Sydney Harbour in 1938 would be to underestimate some of the most significant developments and achievements in both the class and championship history.

The Kiwi involvement has been total with at least one New Zealand representative competing in each of the 67 JJ Giltinan World Championship regattas held so far.

Three boats answered the call to contest the inaugural 1938 regatta on Sydney Harbour and impressed the Australian administrators sufficiently to award the 1939 championship to Auckland.

Crowds on the foreshore in 1939, estimated at 25,000 people, followed the racing.  It was a great start for the New Zealand 18 Footers future, but some gloss was taken off the regatta with several disputes among the teams.

Despite the controversy and some ill-feeling between Australian and New Zealand teams at the regatta, the New Zealand M Class Manu, skippered by Gordon Chamberlin, became the first Kiwi Giltinan champion, and a great tradition of 18ft Skiff Racing was born in New Zealand.

The Kiwis have always been prepared to experiment and innovate and their legacy is a very important part of the sport’s history.

In 1950, New Zealand’s Jack Logan, who finished fourth in 1948, believed he would never beat the Australians in his boat and began to browse through some old plans of his late father, who was a master designer and builder. On a piece of 50-year-old parchment paper he came across a design which gave him an idea. He drew it out, chopped off the bow and gave her a transom in place of a pointed stern. The public called her a skimmer; Logan called her a frying pan, complete with handle.

Logan rigged her with the latest Bermudan rig, polished her hull to a mirror-finish and christened her Komutu, the Maori word for surprise.

When the Australians went to Auckland in 1950 they were unable to match the phenomenal speed of this unusual boat and were convincingly defeated in the three race regatta.

At the 1952 contest in Suva, Fiji contest Intrigue’s crew introduced the use of trapeze, which was described at the time as “enabling one man to virtually have the leverage of two”.

Peter Mander, Intrigue again, then became the first skipper to win two Giltinan World Championships when he took out the 1954 regatta at Auckland from two other New Zealand teams, Envy and Tekana.

New Zealand’s domination resulted from the team’s use of new cold-moulded hulls with two and three skins of diagonally laid planking and the fact that they carried three of the five crew on the trapeze wire.

New Zealand designers and sailors had become great innovators in the class during the 1950s.  Not surprisingly, these innovations immediately changed the style of 18 footers in Australia.

The rest of the 1950s was dominated by Australian teams before New Zealand got back onto the winner’s list with Bernie Skinner’s Surprise at Auckland in 1960.

Despite the fact that there was a small fleet contesting the regatta, one leading yachting magazine at the time described it as “full of interest at all times and gave close and exciting racing to the biggest crowds to ever witness a single yacht race” at that time.

“The 18s are still the glamour boats with the general public, even the weekday races saw the waterfront road and headlands thick with spectators and the starting wharf completely packed”.

Unfortunately for the Kiwis, Skinner’s victory was the only win the New Zealanders were to have during the 1960s.

It wasn’t until 1969 in Brisbane that the first signs of a New Zealand revival began to emerge.  A young skipper, designer named Bruce Farr skippered Guinness Lady into third place.

Farr scored two wins and a second placing in the final three races, but gear failures in each of the first two races robbed the young skipper of a potential Kiwi victory.

By the Auckland regatta in 1971, the Bruce Farr design was starting to become a real force in 18ft skiff racing.

While the experienced Travelodge crew made fewer mistakes overall to win the championship, New Zealand’s Wayne Fleet finished second in the Farr-designed Miss UEB while another Kiwi, Don Lidgard was third in Smirnoff.

The following year at Brisbane, the Bruce Farr design finally broke through for its first JJ Giltinan World Championship victory when Don Lidgard’s Smirnoff totally dominated the 1972 series on Waterloo Bay. Smirnoff scored easy wins in each of the first four races as Lidgard and his crew successfully used the tacking downwind tactic to make the skiff almost unbeatable off a wind. The only defeat came in the final race after being recalled at the start. The team managed to get back into the lead but capsized. After recovering again she finished only 16secs. behind the race winner, Nock & Kirby.

Naturally, the success of the new design led to a general move by most of the leading teams in Australia and New Zealand to race the new design.

Roger Welsh’s US team was so impressed with Farr’s design he also commissioned Farr to design, build and furnish a complete set of sails for a new skiff in New Zealand, then had it shipped to the USA.  Welsh then contested the 1973 regatta on Sydney Harbour in the skiff, Travelodge International, and finished fourth, despite two races being DNFs with gear problems.

By 1974, Bruce Farr designed skiffs were dominating all 18ft Skiff fleets.  The regatta on Waitemata Harbour, Auckland in 1974 was expected to be a close contest with most teams featuring the Farr design.  Few expected the total domination of Terry McDell’s Travelodge New Zealand, which scored four wins from the five races. Travelodge New Zealand’s wins were dramatic as she totally dominated the strong fleet with winning margins from 1min 45secs to 5mins 2secs.

Three years later, another New Zealand designer and 18ft Skiff sailor, Russell Bowler contested the 1977 regatta at Auckland in a revolutionary foam-sandwich constructed skiff named Benson & Hedges. This boat was one-third lighter than other designs, and had a comparatively smaller wetted surface area.  Had conditions been more favourable, the skiff could have easily won the title.

Australia’s leading skippers were thoroughly impressed with the new concept and similar boats were built for the following season.

It was the beginning of the high technology materials and methods of construction we see today in 18ft Skiff Racing.

Rapidly rising costs made it difficult for New Zealand to compete against Australia as the sponsorship funds available in Australia enabled the top teams to continually move forward in the rapidly changing era of technology.

Since those ‘heady’ days of the 1970s, the New Zealand challenge for the JJ Giltinan Championship was very much a token challenge until the early 2000s.

Graham Catley has been the driving force in the Kiwi revival and, along with some very good performances from Alex Vallings, Phil Airey and Chris Skinner, New Zealand is once again back to the forefront of the competition.

Several brand new skiffs have been built by Van Munster Boats over recent seasons and sponsors such as C-Tech, Maersk Line, Yamaha, Knight Frank and AON have been on hand to support the revival.

Graham Catley’s efforts have been enormous for New Zealand and important to the sport at an international level.

“My prime driver for re-launching the 18s, in a more substantial form, in New Zealand was the fact that the 18s, being the foremost centerboard mono hull boat in the world had to have a strong presence on Auckland harbor as they had done many years before.

“Auckland and New Zealand sailing, in my view, was not complete without a strong 18 fleet regularly competing on Auckland harbor for all to see.  Once this was initiated then the objectives moved to becoming racing competitive with the Sydney fleet and ultimately winning the trophy. This is yet to be achieved however our fleet is now establishing some respect in the competition and the goal of winning the event is in sight.”

“While winning is incredibly important, the sustainability of being competitive over the longer term is more of a challenge.  How this is achieved is still in its formation however it will represent a bigger hurdle than winning the event for the first time in many years.

“The other challenge is to keep the 18s relevant in the rapid technology changes that are taking place currently, like foiling, and maintaining the leadership in performance and reputation in the foreseeable future.

When David McDiarmid’s Yamaha came within one point of winning the 2016 JJ Giltinan Championship the revival was complete and another New Zealand victory at the JJ has become a very real possibility.

David is making no rash predictions about his team’s chances at the 2017 championship: “Last year was an outstanding performance and caught a few people off guard.  We knew we had it in us but it was still pleasing to put the performance together. Unfortunately, this year has not gone to plan and we will have to rely on last year’s form a bit.  We’ve had a very poor build up this season with many distractions.  We’ve only recently got the same three crew together again and will be running the same set up as last year.”

Despite David’s cautious predictions for 2017, Yamaha recently won the New Zealand Championship and some locals in Sydney still think the Yamaha team could become the first New Zealand team to win a JJ Giltinan Championship on Sydney Harbour.

The 2017 championship regatta, sponsored by The Winning Group, will be sailed on Sydney Harbour from 25 February to 5 March, inclusive. Spectator ferries will follow all seven races in the championship, leaving Double Bay Public Wharf alongside the clubhouse, at 2.30pm.