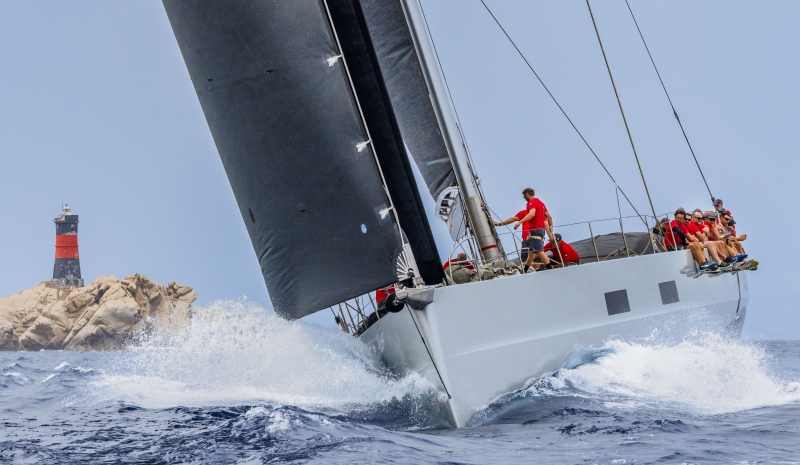 Ribelle was the hero of the day - Studio Borlenghi pic - Superyacht

Porto Cervo: Day three of the Giorgio Armani Superyacht Regatta delivered a breeze from the north east for another stunning coastal race through the islands of the La Maddalena archipelago and Ribelle showed her form from start to finish.

Starting procedures kicked off on schedule at 12.30pm., with approximately 10 knots blowing from east/north-east, which would climb to about 12 and then drop off towards the end of racing.

The Race Committee opted for a clockwise tour of the islands of La Maddalena and Caprera, via the Bisce Strait and leaving the Secca di Tre Monti to starboard. The north of the course brought an interesting passage between the island of Santa Maria and the Isola Piana before rounding the islet of Barettinelli di Fuori, acting as a natural mark.

From there, the superyachts completed their circumnavigation of the archipelago and returned to the finish line, located off Capo Ferro, for a total of approximately 30 miles.

From a tactical point of view, the La Maddalena channel undoubtedly presented a challenge, with wind shifts and localised increases and drops in pressure, such as the transition zone caused by the cover from the island between the towns of La Maddalena and Palau.

Both the Multihull and Superyacht divisions had a reaching start, with the latter completing a staggered starting procedure.

The 107′ Ribelle, owned by Wim de Pundert, with tactician Alberto Barovier and navigator Andrea Visentini, showed great determination right from the off, hoisting the gennaker with perfect timing on the line and proceeding to sail with great skill for the entire race.

Also performing well today was the 33-metre Inoui, owned and helmed by Switzerland’s Marco Vogele, a frequent participant in the superyacht regattas held in Porto Cervo, who placed second, just 40 seconds ahead of Bullitt in third.

Magic Carpet Cubed remains at the top of the overall leaderboard, with the Wally 93 Bullitt chasing just one point behind. Third place in the general classification is also held by a Wally, in the form of Magic Blue.

Alberto Barovier, tactician on Ribelle: “We are particularly pleased with today’s victory because we are still developing as a team. Today’s result is the first step on a competitive path that promises to be interesting. The atmosphere on board is fantastic and this helps us to achieve good results.

“The key to today’s result was when we gybed in front of La Maddalena towards Palau, finding more pressure to get out of that area. We changed sails a lot – gennaker, Code 0 and genoa – to hold our position up to Barettinelli di Fuori, which we rounded ahead of everyone. The drop in the breeze towards the end didn’t help us because ours is a heavy boat, but the result rewarded our efforts.”

In the multihull category, Allegra added another victory to her sequence of first places.

The fleet participating in the Southern Wind Rendezvous and Trophy went on a long outing today, heading north from Porto Cervo to the Lavezzi cardinal mark off the Bocche di Bonifacio strait, before returning past the islands of Budelli and Razzoli.

Following the usual lunch at anchor, the more competitive boats returned to Porto Cervo via a friendly sail in company, but with that pinch of competition that makes navigating all the more fun.

For tomorrow’s final day of racing, the first starting signal is scheduled to sound at 12.30pm, with light winds forecast.