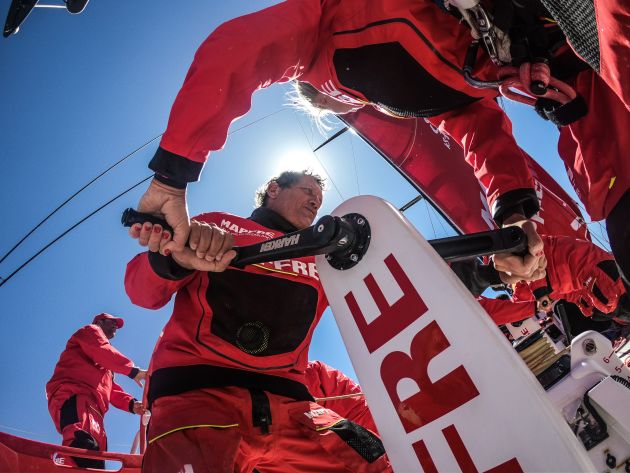 A spectacular start to the 6,500 nautical mile leg from Cape Town in South Africa to Melbourne, Australia, on Sunday saw the city's famed 'Cape Doctor' breeze send the fleet on its way yesterday with 20 to 25 knots and huge seas. As evening approached, some boats saw gusts near 40 knots.

After two weeks ashore in Cape Town recovering from the rigours of Leg 2, the first 24 hours of Leg 3 has proved a stark reminder to the crews of what life at the extreme is like.

Over the coming two weeks the 63 sailors and seven embedded onboard reporters will face some of the world's worst weather as they charge east through the Southern Ocean, the only ocean in the world uninhibited by land.

It is notorious for its monstrous waves and howling winds, brought about by an endless stream of violent depressions that circle the bottom of the planet without restriction.

Feared and respected in equal measure, the Southern Ocean is also an intrinsic part of the Volvo Ocean Race, having featured heavily in each of its 12 editions thus far.

The 2017-18 race, the 13th, boasts three times more Southern Ocean miles than recent editions in a clear nod to the pioneers of the event.

At 1300 UTC Team Sun Hung Kai/Scallywag topped the rankings due to their position slightly further east, but it may be MAPFRE, Dongfeng Race Team and team AkzoNobel are better positioned tactically to get south more quickly.

Speeds throughout the fleet had dropped to around 10 knots as the ridge of lighter breeze impeded their path south.

“We have to cross a ridge, and they're always difficult to cross because it's a transition between two areas of wind in a high pressure system,” Dongfeng skipper Charles Caudrelier said. “We're trying to leave the high pressure at its southern end to catch the low pressure below but these conditions are always difficult. The wind is very shifty, very light. We are lucky though because the system is moving in the opposite direction to us.”

The lighter winds are a welcome relief to the crews after an exhausting first day to Leg 3, allowing them to check over their boats for damage, dry their soaked wet weather gear – and prepare mentally and physically for what lies ahead.

An enormous low pressure system is currently developing to the west of the fleet, and in a few days will engulf the teams with winds of up to 60 knots.

“There's a lot of hype about what's going to happen in a few days' time,” said Bleddyn Mon, making his debut for Turn the Tide on Plastic in this leg. “We're all waiting for that to happen, basically. I'm looking forward to a bit of breeze and some big waves.”

Juan Vila, navigator on MAPFRE, added: “Short term we're expecting the breeze to build to around 20 knots but the big one will be on Thursday or Friday when the first front comes through. The current forecast has winds of well over 40 knots. The main goal will be keeping the boat in one piece.”

Leg 3 is expected to take the fleet around 14 days to complete, giving an ETA of between December 24 and 26.