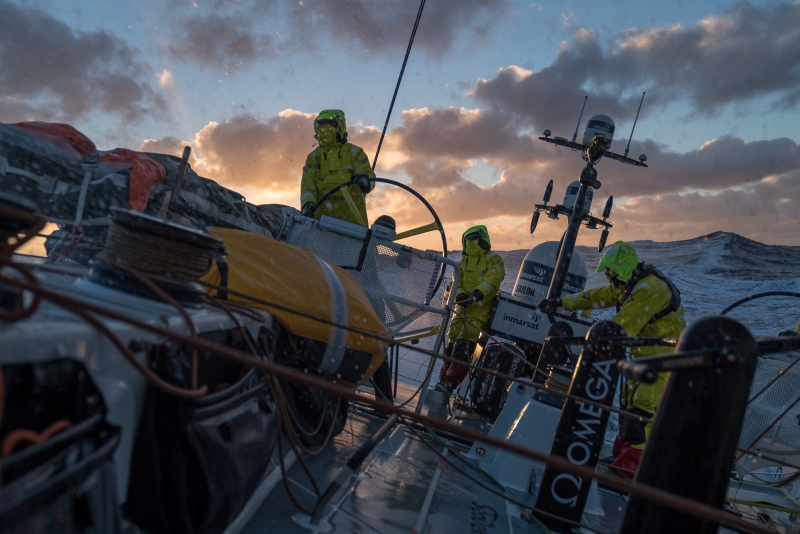 As the winds moderate to 20-25 knots on Sunday, the seven Volvo Ocean Race boats racing through the Southern Ocean towards Cape Horn are taking the opportunity to regroup before the next gale.

Bouwe Bekking’s Team Brunel had taken a more northerly option over the past 36 hours compared to the bulk of the fleet and it appears to have paid off, with the yellow boat now sliding south in front of the pack with a 23-mile lead.

“Some awesome sailing, but also very stressy times, especially when you need to gybe,” Bekking wrote. It’s worth noting his northerly option reduced the number of gybes compared to most of the fleet.

“We had some winds of 40 to 45 knots which is no fun, actually it is pure survival mode, but you know the others aren’t holding back either… No way. It is the way we sail.”

There is a group of three teams chasing – Dongfeng Race Team, Turn the Tide on Plastic and Vestas 11th Hour Racing, all within a couple of miles of each other and looking to close the gap. Team AkzoNobel, another proponent of the northern option is pushing to re-join the pack, but will struggle to slot in ahead of this group.

MAPFRE, who had been either at or near the front since the start of the leg, has fallen off the pace today. With the winds easing, the damage to their mast track is preventing the team from shaking out a double-reef in the mainsail.

While the rest of the fleet adds sail area in the moderating winds, MAPFRE is sailing underpowered, and at times up to 3 knots slower.

“We’ve made a small repair to sail with two reefs and now we are trying to develop that to sail normal from here to the end of the leg,” said Pablo Arrarte, from a subdued MAPFRE. “It’s difficult. We’re still working on it… We don’t have the full solution yet… We have 20 hours until the breeze comes back up so we will try to fix it before then.“

100 miles further back, SHK/Scallywag is back on its feet after dealing with problems of their own following an accidental gybe on Saturday that put the boat on its side in big winds and heavy seas.

“Your initial reaction is to just stick to the process and look after the people and the boat,” said skipper David Witt. “But once you get through it and get the boat up and running again, you understand the enormity of the job all of the skippers in this race have, to ensure the welfare of the people on board. We’ve tipped it over in the middle of the Southern Ocean in the middle of the night and the closest thing to us is a satellite. It really hits home…

“But our guys don’t give up and they deserve a result on this leg, that’s our responsibility now.”

Earlier on Sunday morning, Brunel had led the fleet past Point Nemo, the most remote spot on the world’s oceans. Point Nemo is nearly 1,400 nautical miles from the nearest land, meaning the closest people to the sailors, apart from their fellow competitors, are the astronauts on the International Space Station, some 220 nautical miles overhead.