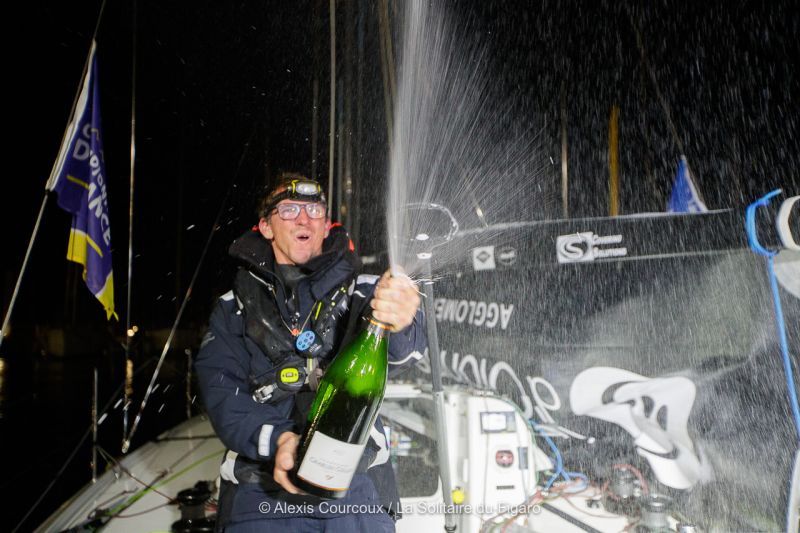 It is the first ever stage win for 39 year old Macaire on a Figaro solo racing career which spans ten years and which includes two overall podiums, second in 2013 and third in 2016.

He was denied a leg victory on the last leg in 2015. After finishing first across the line into Dieppe he was judged to have sailed inside a forbidden zone some 18 miles from the finish and was penalised an hour by the jury.

Macaire is based out of Les Sables d’Olonne and races with the Team Vendée Formation. He took the lead of the 35 boat Figaro Beneteau fleet of solo racers during a very challenging first night in very light and unstable winds and was never passed.

On the quick spinnaker return from the Fastnet lighthouse, the midpoint of the stage which was rounded on Tuesday evening, Macaire retained almost metronomic consistency when under constant pressure from the chasing pack he held his ground to secure the narrowest of victories this morning.

The final miles into the finish line of Saint-Quay-Portrieux had all the intensity of an inshore championship finale, Macaire covered young pretender Loïs Berrehar, 27, through a dogged match race in a lightening breeze but the older sailor prevailed by just one minute and 35 seconds.

Macaire said on the dock in Saint-Quay-Portrieux, ” What a relief ! The finish was quite tense, because the more we approached the line, the more the wind eased, I saw everyone getting closer and closer, I was really scared of getting caught and losing this victory just on the line. I've been waiting for it for a long time, for this stage victory, I visualised the others with the champagne and was wondering if I will ever make it after winning before and being downgraded on jury, this time it’s for me, for real !”

On what is his first La Solitaire stage in the new Figaro Beneteau 3 design introduced last year, Britain’s Sam Goodchild finished in 11th place, after lying eighth for much of the second half of the leg he lost three places in the final miles to the line, but is pleased at his result, finishing within 20 minutes of the winner who heads a very tightly packed Top 12.

Goodchild reported “I made a few mistakes which cost me time here and there which I can do better next time, but on the whole I think I sailed pretty well. It was not very easy weather conditions but I just think if I did some things a bit tidier and easier but that is my first Figaro back in six years, my first in the Figaro 3 and so these are not big surprises to me. I am within 20 minutes at the end of the leg so that is not too bad.

“It is funny to race so hard for days and earn 10 miles of advance on people and then finish within minutes of them but that is the Figaro. I lost these silly places and times. During the race I had some seaweed round the keel which everyone gets but I faffed around not sailing properly, I should have got rid of it, stopped the boat and gone backwards and got on with it. And I was not so clear on the weather and my choices and spent too long zigging and zagging around. I did not fully manage the weather properly.”

As top international to lead the standings for the VIVI Trophy, he pipped Tom Dolan (Smurfitt Kappa) on the line by two seconds, the Irish skipper taking 12th. Up in third on the approach to Fastnet Dolan lost places on the approach but delivers a solid result on which to build some consistency.

Dolan said “It was great to see Fastnet and it was nice to be up the front for a bit but I just messed up a bit coming across the Irish Sea. We had all sorts of conditions. The last two years my first legs have been a disaster. But 12th is OK and I am in touch with the leader. But at this stage it is all about time, not so much about placings.”

On his return to La Solitaire for the first time for four years Australia/Britain’s Jack Bouttell (Gillot Fromagerie) was 25thafter being up to 19th. Having been 37 miles behind the leader on Tuesday in 31st place morning Alan Roberts (Seacat Services) made a decent recovery in terms of time behind the leader. As Macaire crossed Roberts was 3.7 miles behind to finish 28th with a deficit of 1 hour 1 minute behind the winner. He finished just ahead of compatriot Phil Sharp (OceansLab) who was 29th.

Among those who recovered best was Pierre Quiroga (Skipper Macif 2019) who marched through the fleet to seventh after rounding Fastnet 21st, nearly 10 miles behind Macaire at the turn for home.