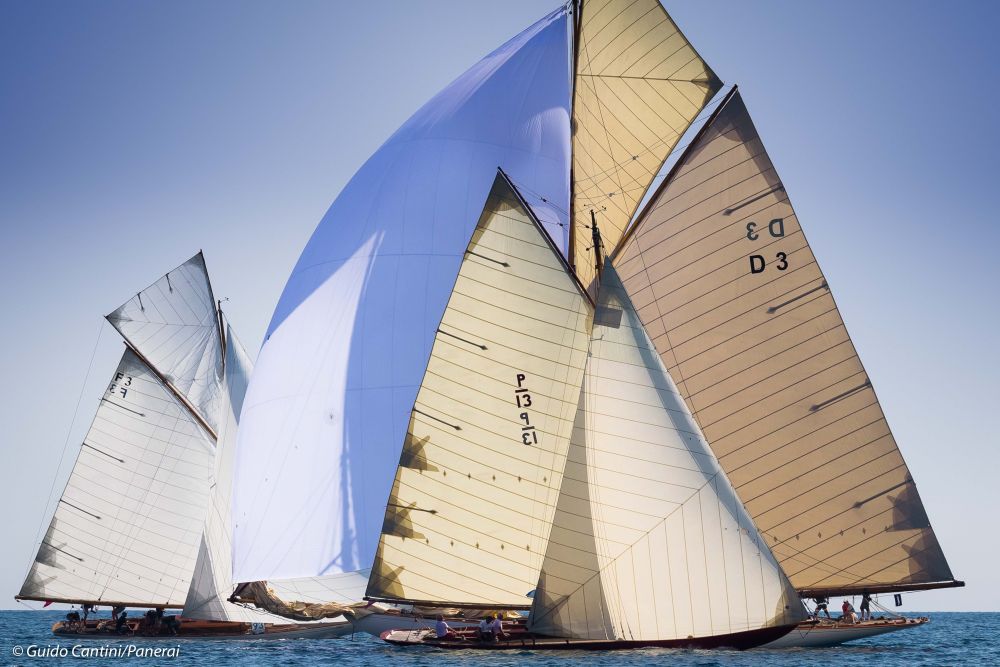 A good breeze of around twelve knots and flat seas made for an ideal setting of day 3 of the Régates Royales de Cannes – Trophée Panerai.  Classics had their double-lap triangular course set in the Bay of La Napoule, with the overall scoreboard taking a more defined shape. In the Juan Gulf the air was lighter and shifter, forcing the Race Committee to wait until the early afternoon to be able to launch two races for the Dragons, the 5.5 and the Tofinous.

The weather pattern was no different today – light in the morning, developing into a south-easterly, increasing to 12-14 knots later in the afternoon, the third episode of the Régates Royales – Trophée Panerai was characterized by a steadier and stronger wind, putting tacticians, navigators and sailors’ skills to the test.

It was Mariska to cross the finish line in first among the big boats, the 23 Metre Cambria and the others unable to keep her pace, piling up more valuable points and increasing her margin after three races. Similarly, other longer and more powerful boats, like the Italian Maxi Il Moro di Venezia showed that quality counts more than age. The two 12 Metre France and Chancegger seems to like stiffer winds better, as do the One Tonners Ganbare (1973), Resolute Salmon (1976) , Sagittarius (1974) and Galvana (1975).

In the Marconi class, Argentinean Daniel Sielecki’s Cippino got a win on Brendan Mc Carty on Rowdy with Leonore skippered by Mauro Piani in third on both the day’s and the overall results board. Angelo Mazzarella’s Carron IIdespite a second place in today’s race, won by German Frers’s Fjord III,is still on top of the smaller Marconi scoreboard.

After some waiting, a light breeze also set on the Juan Gulf where the race course is set for the Dragons. Two crews were caught over the line with a black flag and were therefore disqualified: French Stéphane Baseden on Outlaw and Russia’s Vasily Senatorov on Even Better. The fight for victory was, once more, a thing between UK’s Yvan Bradbury on Blue Hazeand Russian Anatoly Loginov on Annapurna. The day’s second W/L race further confirmed the leadership by the two crews, who will more than likely finish on the series’ podium, finishing tomorrow, while Germany’s Pedro Rebelo de Andrade on Pow Wow, France’s Jean Bréger on Ulysse, British female skipper Gavia Wilkinson-Cox on Jerboa and Russia’s Igor Goikmberg on Zenithcan still aspire to the bronze.

They may be America’s Cup, Volvo Ocean Race, Mini Transat, offshore or Olympic sailors or maybe all of the above. Many can be seen on the dock in Cannes for the Régates Royales-Trophée Panerai.

Brazilian sailing star Torben Grael has done it all, and almost won it all. He says classic yachts are his fist-time love and explains how sailing is a true family affair for the Grael’s dinasty.

Is this your first time in Cannes?
“No, I raced here with by brother back in 2007, on Wright on White a 12 Metre, originally called New Zealand KZ3. This year I was invited to sail with Linnet. I love classic yachts, I own a 6 Metre from 1912 and being here is a nice opportunity to see so many wonderful boats.”

You are sailing with Linnet, that is Patrizio Bertelli’s boat right? Any news you can give us on the America’s Cup?
“There is nothing officially defined yet. I’ve been sailing with Prada Luna Rossa for ten years, I have a lot of friends working  for the team. I like sailing with Patrizio and enjoying my time here in Cannes, we’ll be in Saint-Tropez next week racing together on Linnet.”

You’ve done the Games, The America’s Cup, the Volvo Ocean Race and now you’ve turned to classic yachting?
“No, actually I’ve learned to sail on this kind of boats, the one I have now used to be my grandfather’s and she won a silver medal in 1920 in Stockholm. She’s beautiful, a gaff cutter originally. It’s nice to come to Cannes and see so many gorgeous old yachts, we haven’t so many in Brazil. But for us is a family affair. My brother Lars (also an experienced sailor and an Olympic medallist) has a 6 Metre from 1933, and our uncles have one 5.5 and a Dragon. We also love cruising boats.”

Your daughter Martine also won a golden medal in Rio 2016 and she’s embarking for her first Volvo Ocean Race, it’s a real sailing dynasty…
“Well, she’s third generation. My uncles went to games in Acapulco and Kiel, in the Star and Soling class. My brother Lars and myself were on it from 1984 up to Athens 2004, and now is Martine, but my son Marco also sails a 49er and finished eleventh in Rio. It’s a nice thing to see.”

Do you think it will be harder for a girl?
“Yes it is quite tough but I think introducing the rule of having a maximum of seven male and two female crew members was very positive.  It will help having more girls doing offshore top events.”

From Cowes with love

At the eve of the 20th century, yachting becomes more popular in both the USA and in Europe and designers start creating boats specifically conceived for the local conditions. Concepts and crew skills differ hugely at a time when yachts start to be transported by rail from one country to the other. The Godinet rule, adopted in 1892 by the Union des Yachts Français (French Yachting Union) quickly spread all over Europe until 1901 when a more restrictive rating, the jauge Méran, was  embraced. The Godinet rating rule was also used by the Cercle de la Voile de Paris  in 1899 for the first championship reserved to One Tonners, Un Tonneau in French, that later became the famous One Ton Cup.

Bona fide
One of the aficionados of the Régates Royales de Cannes and one of the best example of  yacht designed based on the Godinet rule, is gaff cutter Bona Fide, built on the Isle of Wight at Charles Sibbick & Co.’s shipyard in less than two months for owner J. Howard Taylor. A century later she underwent extensive restoration works at the Cantieri Navali Dell’Argentario on the Tuscan coast. The boat was conceived according to the Five Ton rating rule in 1899, and won gold at the Olympic Games in 1900,