My Song prepares to tackle the Faraglioni off Capri. Photo: Francesco Rastrelli /CRVI.

The 2018 IMA Mediterranean Maxi Offshore Challenge sets sail this month with the Rolex Middle Sea Race, starting from Valletta’s Grand Harbour, Malta, on 21 October. Comprising the region’s most prestigious offshore races, the five event Challenge aims to promote and boost Maxi yacht competition offshore in the Mediterranean. It is open to all maxi yachts, in addition to those belonging to IMA members.

Organised by the International Maxi Association (IMA), the body sanctioned by World Sailing to represent the Maxi classes, the 2018 IMA Mediterranean Maxi Offshore Challenge will for the first time comprise five events, the best three counting towards the main prize. Five events represents one more than the 2016 and 2017 series, with the addition of the Regata dei Tre Golfi for 2018.

One of Italy’s oldest sailing events, the 2018 Regata dei Tre Golfi will be its 64th edition and will set sail from Naples on 11th May. Run by the Circolo del Remo e della Vela Italia (CRV Italia), the format for the Regata dei Tre Golfi begins with dinner at the CRV Italia clubhouse in Naples’ Santa Lucia Marina, followed by a midnight start beneath the city’s magnificent Castel dell’Ovo. The 170 mile course takes the fleet through the bays of Naples, Salerno and Gaeta around Ponza and Li Galli before finishing in Capri. In 2017, for the first time, the event officially formed part of Rolex Capri Sailing Week.

Andrew McIrvine, Secretary General of the International Maxi Association said: “We are delighted to add the classic Tre Golfi Race to our Mediterranean Challenge. It means we now include all the best classic races in the region and can expect greater Maxi participation.” 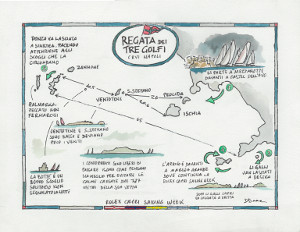 Roberto Mottola di Amato, chairman of CRV Italia added: “We are proud to have this agreement in place with the IMA that will allow Maxis to join next year both our 64th edition of the Tre Golfi long-distance race, as well as at the inshore races of Rolex Capri Sailing Week. It is a most welcome return and I look forward to seeing the race record broken by the fastest yacht of the fleet.”

The 2018 IMA Mediterranean Maxi Offshore Challenge doesn’t follow the calendar year, and so starts with the 2017 Rolex Middle Sea Race. One of the classic ‘600 mile offshore races’, it is longest of the five events. It follows a dramatic course: Starting and finishing beneath the ramparts of Malta’s ancient capital, Valletta, it passes the active volcanos of Mount Etna and Stromboli before rounding Sicily anti-clockwise with a turning mark at Lampedusa, 70 miles from Africa. The race has been won overall previously by maxis such Andres Soriano's Alegre (2009), Rambler (2008), Hasso Plattner's Morning Glory (2006) and Carlo Puri Negri's Atalanta II (2005). George David’s Rambler 88 holds the course record of under two days.

New to the IMA Mediterranean Maxi Offshore Challenge for 2017 was the 151 Miglia, run by IMA Vice President of the Mini Maxi Racer class, Roberto Lacorte. The course of this goes from Livorno to Punta Ala via various islands. This year's line honours winner was the 69ft Pendragon VI of Nicola Paoleschi, ahead of other Mini Maxis such as Lacorte's Vismara 62 SuperNikka, Luigi Sala’ YORU, Atalanta II, Aldo Parisotto’s Mylius 65 Oscar 3 and the Mylius 60, Fra Diavolo, of Vincenzo Addessi.

The Giraglia Rolex Cup is another of the Mediterranean’s oldest and most prestigious offshore races. Organised by the Yacht Club Italiano, it was first run in 1953. Maxis regularly claim line honours, such as Dieter Schön's Maxi 72 Momo this year or previously Sir Lindsay Owen-Jones' Magic Carpets and Igor Simčič's 100ft Esimit Europa 2.

The Palermo to Montecarlo offshore race has become another Mediterranean offshore classic with a long history of maxi yacht competition, since its first edition in 2005 was won by the famous maxi ketch, Steinlager 2. Since then maxis regularly pick up line honours, including Esimit Europa 2 (the present record holder), Senso One (ex-Mari Cha IV) and Rambler 88. American Byron Ehrhart's Reichel Pugh 66 Mini Maxi, Lucky, won this year’s race overall.