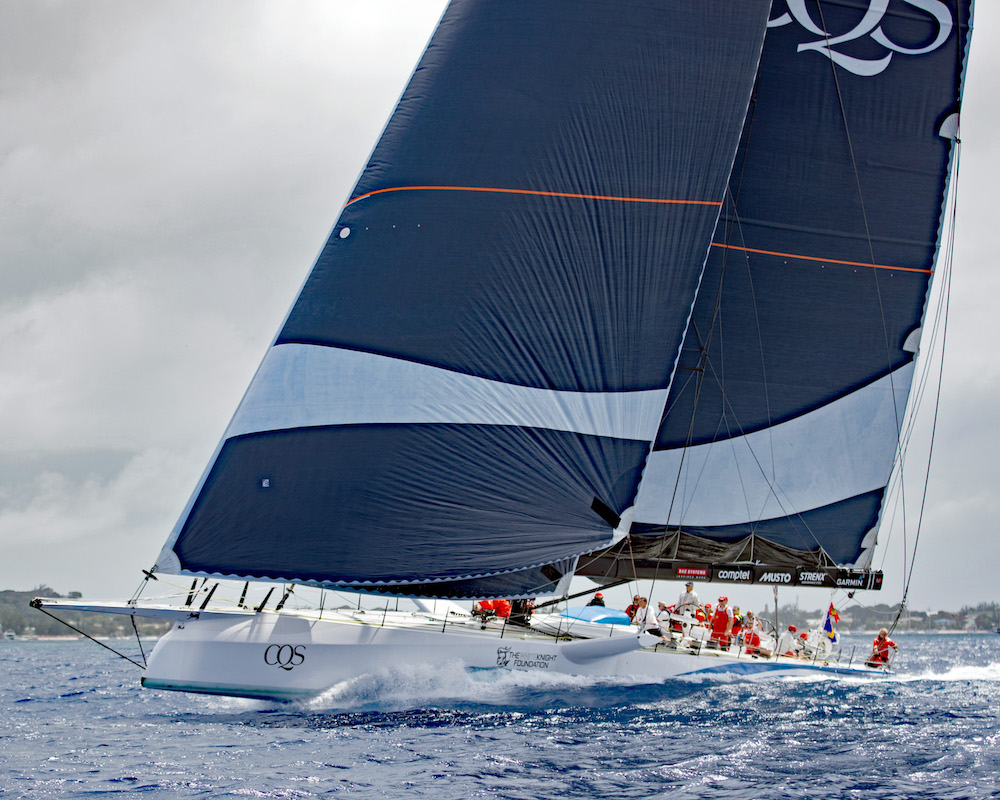 Bridgetown, Barbados: While the lively conditions in big seas proved too much for many of the 34 entries in the 60 nautical mile sprint around the Island of Barbados, for others it couldn’t have been more thrilling – in total seven records were broken – the largest ever number of records broken in the history of the event.

One of the biggest heroes of the day was undoubtedly Trevor Hunte, the local adrenalin junkie who, on his Starboard Phantom Batwing 377 windsurfer, smashed his own record set in 2016 by just over four minutes with a time of 5h 30m 46s.

As he arrived on the beach at Barbados Cruising Club to crowds of well-wishers, an elated and exhausted Hunte confessed it was the most emotional and difficult sail of his life, and said he was just so happy to be back in one piece.

“You can’t train for a sail like that. North point was incredibly dangerous with swells of easily three metres. It was scary with wind squalls coming in at over 25kts, maybe more, under the clouds. It was an incredible and difficult challenge.”

Commenting in the most difficult part of the race, Hunte added: “At East Point the waves finally got me. They were huge and I got bombed off a couple of times and, as I fell I cut my toe in the metal mast-foot track. If that hadn’t happened I would have been her 10 minutes earlier.”

Arguably the most notable result of the day with a finish time of 4h, 13m, 37s was CQS, the 100ft multi-winged super maxi from Australia skippered by Ludde Ingvall that not only broke the Absolute Monohull record but also established the 100ft and under record.

As she crossed the line this morning, it didn’t take long for her and her super-tuned crew to power up, weave their way through the fleet and prepare for the extreme conditions and big seas at North Point.

Ingvall, a former round the world yachtsman, world champion and record holder, commenting after the race, said: “We are delighted because that is what we came here for. I felt we should have been a bit quicker but we are happy nevertheless.

“It was wild out there and we had 30+knts of wind on the nose going round the north-west/north-east point but the boat performed well recording 24-25kts of boat speed at times off the wind. All in all a good day and lots of good team spirit.”

Among the young sailors taking on the challenging course today was Jason Tindale (27) in College Funds. He and his team from Barbados Yacht Club once again demonstrated their skill by sailing a tactically sound race. Having established the J/24 record in 2015 and bettered their time in 2016, they’ve done it again with a time of 8h 18m 9s.

Commenting on his epic sail, Tindale said: “It was, without doubt, the worst conditions I have ever seen at North Point. We had squalls of 30 plus knots with gusts, but we had no option other than to carry on. I think the most wonderful part was sailing on one tack down the east coast. Basically you can’t get much better than that. It was, to coin a much-used phrase ‘Champagne sailing’.

“I think we also had a bit of luck today because, on the approach to the finish line the eyelets pulled out of the spinnaker pole. Had that happened further up the coast we would have lost the record for sure because we would have been under jib only.”

The 50ft and under record went to the two-year old British custom-built Marc Lombard 46 IRC cruiser racer – Pata Negra – owned and skippered by Giles Redpath with a time of 6h 19m 53s.

Having sailed from St Vincent yesterday, Redpath and his team of mainly locals, and some of who had never sailed before, did exceptionally well given the extreme conditions. Commenting on his success, Redpath said: “It was a fantastic race but quite challenging at the North Point in particular because it was lumpy and quite shifty and we ended up having to beat into the big seas, which was fairly uncomfortable.

“However, I think the highlight of the day was coming down the east coast, it was a real sleigh ride and we did 20nm in about an hour and a quarter and hit 20kts of boat speed at times, which really was thoroughly enjoyable.”

Sailing such a challenging race with a crew is tough enough but to race it alone is a huge feat. However, Andreas Berg from Germany sailed an impressive race and managed to break his Singlehanded record from last year in his Dufour 44 Luna. This highly focused sailor prepared well used his previous experience to improve his overall record time by just over 10 minutes with a time of 7h 57m 19s.

Conviction, the local Botin Carkeek-designed TP52 with David Staples at the helm sailed a great race and broke the 60ft and under record from last year by just over three minutes. Mention must also be made of the consistently fast local team on the J/105 Whistler. Fresh from her CSA Racing Coastal Series overall win Whistler with Peter Lewis on the helm took the CSA Record with a time of 6h 11m 40s.

The extreme conditions were far from ideal for the four foiling kite surfers who started out this morning. However, Kevin Talma persevered and was the only one who managed to complete the course and establish the Foiling kite surfer record with a time of 5h 42m 33s.

The Classic fleet, including The Blue Peter, Mat Barker’s Alfred Mylne 65, Ruth, the local schooner, and a couple of working Brigantine – Tres Hombres and Fryderyk Chopin, glided gracefully up the west coast but the conditions took their toll and none managed to complete the course.

Locals and holidaymakers not only headed to the south of the island to the hub of the event at Barbados Cruising Club, and Barbados Yacht Club to watch the starts and finishes, but supporters also followed the fleet round the island enjoying the party spirit at key vantage points along the coast, including the North Point, historically the most challenging part of the race.

Barbados Sailing Week gala prizegiving party and dinner to mark the end of the 2018 event, takes place tomorrow evening at the Beach House, Holetown on the west coast of the island.