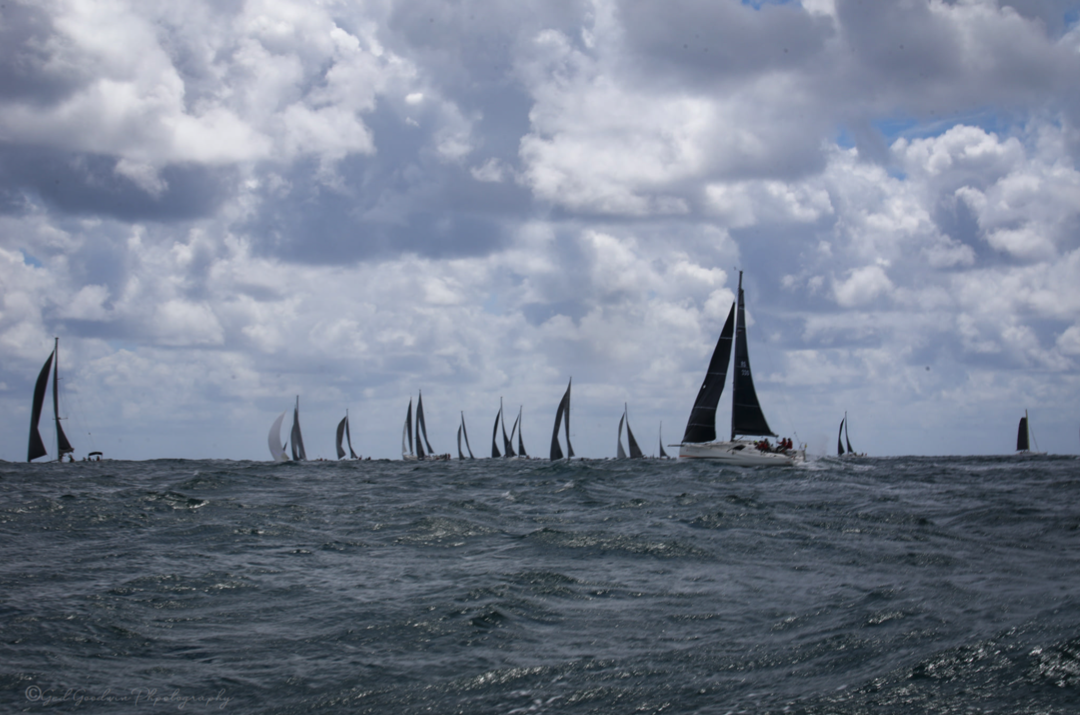 The 2022 Surf to City Yacht Race, hosted by the Queensland Cruising Yacht Club (QCYC), was sailed from the Gold Coast to Shorncliffe on Saturday January 22 incorporating both inshore and offshore fleets.

There were 75 entries with some late withdrawals.

The delivery south on the Friday proved to be an endurance exercise for many of the offshore fleet as an extreme weather system caused very strong south easterly winds and a short, sharp chop in the northern areas of Moreton Bay. Fortunately, most of the inshore competitors were able to trailer their yachts to Southport thus avoiding the unpleasant delivery.

Southport Yacht Club’s newly completed Super Yacht Berth allowed any yacht who required a berth to moor safely overnight. Due to Covid restrictions, the Friday night briefing was broadcast via Zoom and Facebook. This worked very well with the exception of some minor microphone issues and all competitors were able to acquire the relevant information

The total reach on the Race Facebook page in the 28 day period pre and post race was over 7,500 people.

Thirty monohulls and 17 multihulls lined up for the Saturday morning start.

The inshore fleet were led off by the multihulls at 9.10 am, followed by the faster monohulls ten minutes later then by the remaining monohulls at 9.30am. The start sequence is designed so that the combined fleets do not all meet up at the narrowest section of the course at Jacobs Well.

The starts were without incidents and all yachts enjoyed running conditions for the first leg. As predicted Parabellum, an extreme 40 catamaran, skippered by Joel Berg, soon left the fleet in their wake. Crank, Andrew Wickland, one of the favourites for monohull line honours, was an early casualty having dropped their mast and retired to Horizon Shores. Peow Peow, Gavin Arnold, reported taking a swim but fortunately recovered to finish the race.

4 Shaw, Stephen Broadbent, another monohull line honours favourite suffered equipment failure and was forced to retire. Local Doyle sailmaker, Charles Baker on board his yacht More Dough proved it was self-righting however did suffer damage to the bow prodder whilst doing so but managed to still get to the finish line.

Towards the back of the fleet, Madman, Neil Finlayson’s recently refurbished Ross 780 lay down off Peel Island and took some time to recover. Elles Belles, Chris Noble, dropped their spinnaker and stood by in case assistance was required as did Joanne Brodie, Daniel deBuriatte. Fortunately, Madman recovered and finished the race.

Race officials, Harley Cowlishaw and his wife Ann, had waited at Southport for the offshore fleet to start at 10am before driving to QCYC at Shorncliffe. When they were at Yatala, Brian Richards aboard his Peel Island check boat, phoned to report that Parabellum had just passed them and in Brian’s words: “You could water-ski behind them.”

The finish boat, Shoestring 11, manned by the owners John Hughan and his wife Therese were only able to set the finish line up after noon due to tidal restraints. Fortunately, the line was set in time to see Parabellum cross at 12.16.31 with an elapsed time of three hours six minutes 31 seconds smashing the previous race record and over an hour ahead of the second placed multihull Ritalin, Craig Humphries.

For the full results see: https://www.surftocity.com/wp-content/uploads/2022/01/INSHORE-Results-Sheet-V1-Prov-for-Publication.pdf

The fleet of 24 monohulls which included four two handed and four multihulls had to contend with a very sloppy Gold Coast Seaway to get to the 10am start. All yachts weathered the Seaway with the exception of Morning Star, Jack Kliner, which experienced some engine issues but fortunately managed to rectify the problem and started the race 30 minutes behind the fleet.

Kerazy, Shane McKay, having recently repaired a broken boom vang which occurred during the Sail Paradise regatta in early January had the same fitting fail once again and had to withdraw just before the start.

The fleet experienced 20 knot south easterly winds with gusts up to 30 knots for their ride North outside Stradbroke and Moreton Islands. Not a diamond, David Redfern took an early monohull lead from Kerumba, Tam Faragher and Yeah Baby Flow Sails, Andy Lamont. They were soon overtaken by the first multihull Rushour, Drew Carruthers, which went on to break the multihull record in a time of six hours 56 minutes 52 seconds which is close to breaking the overall offshore record currently held by Black Jack.

All yachts experienced an exhilarating ride North. The Two-Handed Division had some first time entrants. Italian Job, Tom Johnson and crewed by Steve North, recorded speeds of 19 knots whilst Jenesis, Michael Andrews reported that it was a great learning curve.

Not a Diamond held on to claim the offshore monohull line honours with an elapsed time of eight hours 51 minutes 40 seconds, 28 minutes ahead of Kerumba in second place.

Considering the testing conditions, all offshore yachts completed the course with reports of only minor gear breakages. Blunderbuss, Danielle Hutcheson, lost their stuffed Lama mascot whilst sailing in the north east channel only to have it found on the shores of Bribie Island a few days later (thanks to social media) and returned, washed and no worse for wear after quite a long swim.

For the full results see: https://www.surftocity.com/wp-content/uploads/2022/01/OFFSHORE-Results-Sheet-V1-Prov-for-Publication.pdf

A huge thank-you needs to again be extended to all personnel at the Southport Yacht Club who assisted in making this event a success, and also our sponsors:

The generous assistance provided by the check boat skippers, Brian Richards on Spectrum, Blake Boulton on Trump Card and John and Therese Hughan on the finishing boat Shoestring II, was much appreciated.

Special thanks need to go to Ann Carter who spent endless hours on the computer assisting competitors with their entries and enquires.