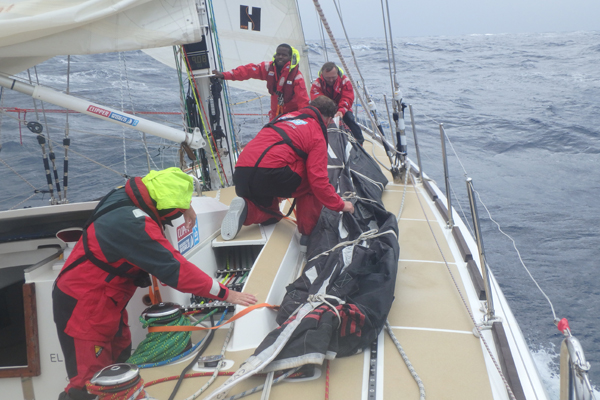 Strong winds in the Da Nang New Discovery of Asia Race have led to some thrilling racing conditions for the Clipper Race fleet, with teams recording speeds of over 32 knots near the virtual mark at the most southern point of the course. The choppy sea state presents its own challenges for the crew but as the front runners begin their journey north, conditions are expected to ease slightly over the next couple of days as a high develops off the south of Japan.

As Derry~Londonderry~Doire continues to lead the fleet, GREAT Britain and Garmin are in an ongoing battle for second place. Currently in fourth place, LMAX Exchange Skipper Olivier Cardin says: “We just rounded the Vietnam virtual mark last night. In the dark, we turned the helm to the wind and everything changed on board. We felt the real wind around 30 knots with the tension in the sheets. We felt the aggressiveness of the waves, giving the boat some unusual and daring movement. We felt the boat heeling!”

LMAX Exchange is closely followed by Qingdao, which has set a new fastest time for the fleet in the Clipper 2015-16 Race, with circumnavigator Vitaly Kmelnitsky hitting 32.61 knots while at the helm. Da Nang – Viet Nam has also rounded the Vietnam virtual mark, with IchorCoal and ClipperTelemed+ now on the approach.

IchorCoal Skipper Darren Ladd says: “We're getting there! One more gybe and 130 nautical miles of downwind shenanigans and the long haul back north really starts in earnest. There is, what would be considered in ocean racing terms, a small reach around the first virtual mark of only 90nM and then a mere 850nM sailing to windward.

“Conversation is slowly moving on from the route changes to plans for the Da Nang stop over. Potentially Vietnam is one of the most exciting destinations to date. First time Clipper Race Host Port, different culture and all the delights of Asian food and hospitality.”

So far, no team has been able to beat the Ocean Sprint time of 14 hours 18 minutes set by race leader Derry~Londonderry~Doire. Mission Performance is still on the course but has exceeded this time, so the only other team that could possibility take the two bonus points at this stage is twelfth placed Visit Seattle. Skipper Huw Fernie says: “We're now just getting into the shelter of the Philippines and so the wind is dropping a touch, the seas are getting easier to cope with but are still large and messy. It's easy to see how so many of the others ended up having issues here, especially as they had more wind to deal with and were fighting for positions too.

“Speaking of the wind we're just now lining up for the Ocean Sprint. We'll be picking the nicest spot of longitude we can find and then we're putting in a swift left hander and heading south like a freight train. Well that was the plan but according to the latest in a string of particularly accurate weather forecasts our freight train will be grinding to a squeaky halt before the sprint is done.”

Will Visit Seattle take the coveted additional two points on offer in the Ocean Sprint away from Derry~Londonderry~Doire?

With the course updated to ensure the fleet arrive in Da Nang within the original window, the tight circuit with multiple waypoints continues to challenge the programming of our automatically generated standings table. This may throw up some misleading positions so please check the Race Viewer map to see relative positions as the Da Nang New Discovery of Asia Race continues.