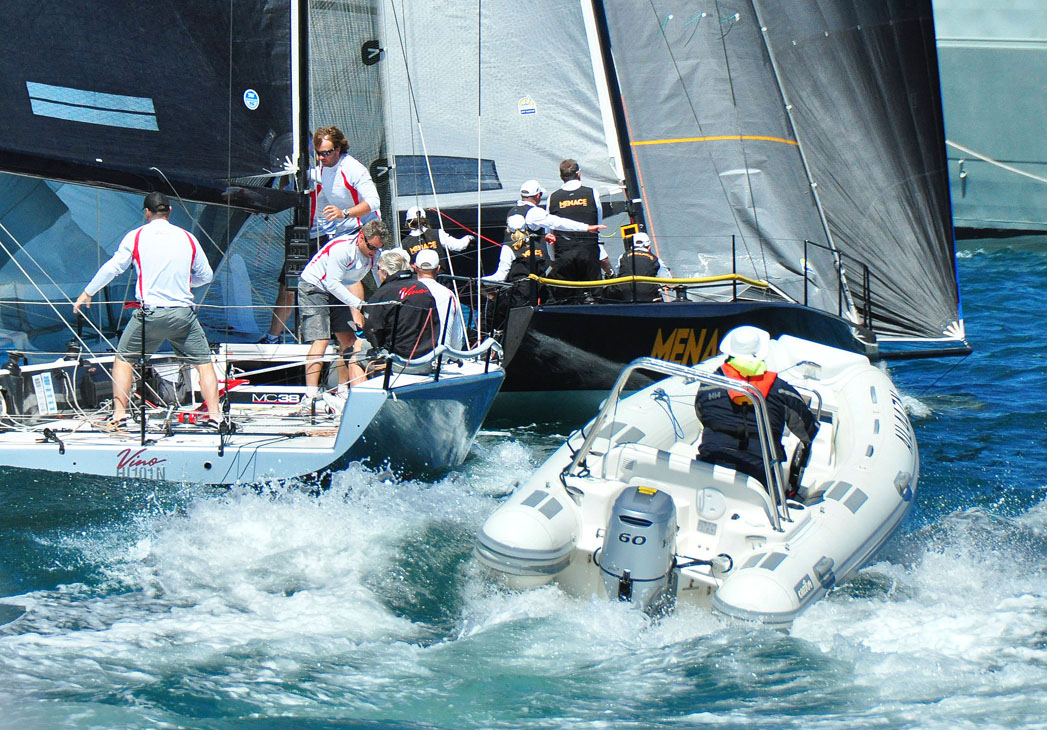 Vino and Menace under the watchful eye of the umpire. Photo credit Bob Fowler.

A record nine MC38s fling open the door to another year of dynamic one design racing with the class’ national title on Pittwater hosted by the Royal Prince Alfred Yacht Club February 17-19, 2017.

Class statesman Leslie Green and his Ginger crew are three-time consecutive Australian champions facing this year’s title with the same core team who have invested the same amount of effort in preparation, the winning skipper assures.

“We have been training as much as we can. Fortunately we’ve broken a few things – I love to do that while we are training – and we’ve got good sails on the boat. We spend a lot of time choosing our crew; it’s always the core of the Richie Allanson/David Chapman group, nothing changes much. Julian Plante will join us this weekend helping Richie with trim and as alternate helmsman,” Green added.

Pittwater isn’t the Cruising Yacht Club of Australia member’s favourite stretch of water though he’s philosophical about its nuances: “It can be a bit unfair. You try to take as much luck out of the game as you can. It’s the same for everyone; lucky breaks go each way,” Green added.

As well as leading his troops into another championship round, the generous 80-something year old skipper has also offered an entire set of sails to Steve Barlow for the MC38 Lightspeed, which is on loan from McConaghy Boats at Mona Vale.

“Why wouldn’t you?” Green asks. “I think it’s normal you try to help people in this life. It doesn’t hurt you… though I suppose if he won…”

Barlow has been a guest helmsman at two different MC38 series on Maserati and Kokomo, both heavy air baptisms. Now he’s done a deal with McConaghys, the company that built the MC38, to lead his own campaign.

“We stuck the mast back in and gave it a polish, then we begged and borrowed some sails,” Barlow said. “We’ve thrown together a crew of my Farr 40 guys from last year, most of them have sailed the MC38s as well.

“Our expectations are not high but we definitely we want to give it a go. When you are competing against seasoned campaigners like Menace and Ginger with a thrown together crew, we understand we won’t be on the pace with those guys. There’s definitely a pecking order and hopefully we can stay off the bottom of the ladder.”

Billy Sykes, Mitch White and Murray Gordon are some of the names on Lightspeed’s crew list.

Four-time Kiwi Olympian Hamish Pepper is replacing regular tactician Ray Davies, who is busy with his America’s Cup duties, on Menace sailing for the Royal Akarana Yacht Club in Auckland. The team admit they’ve not sailed Menace since the last MC38 regatta back in November, but history shows there’s always plenty of pedigree on board to smooth out any rough edges.

Most of the Sydney boats, including Dark Star, Ghost Rider and Vino, have been spotted regularly on Pittwater training for the competition climax happening inshore over three days, offering club races and other boats the chance for ringside seats.

Strengthening nor’easters are likely for tomorrow’s opening day before an overnight southerly change and 18 knot southerlies decreasing to 16 knots on Saturday afternoon. High winds feature in the long range outlook for Sunday, up to 28 knot southerlies, something PRO Steve Merrington and the owners will monitor.