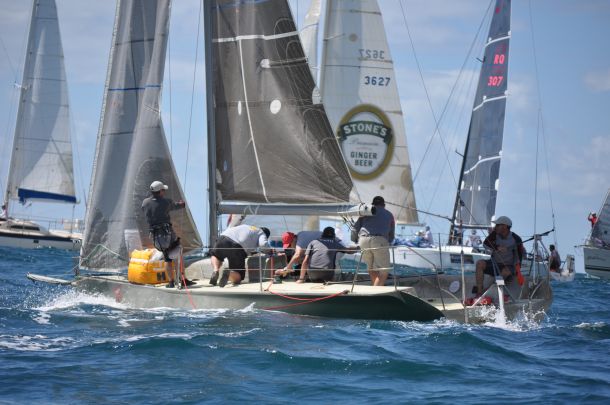 Surf to City Offshore Fleet - Out of Orbit. Photo by Jordana Statham.

The local summer of sport is about to get a lot cooler with what looks like a record breaking number of boats getting ready to assemble on the start line of the Queensland Cruising Yacht Club Surf to City Yacht Race on Saturday of the Australia Day long weekend, January 24.

This epic race will begin from the Southport Seaway on the stunning Gold Coast and finish just off Shorncliffe Pier. In what is sure to be a tough battle for line honours, veteran yachts and new-comers from Queensland and New South Wales will pull out all the tactical secrets and battle for the illusive line honours trophy and of course the ultimate bragging rights.

The action really starts days earlier as crews sail or tow their boats to Southport Yacht Club for the start of the race. From there the fleet splits on Saturday morning at the Southport Seaway and the big ocean greyhounds head out around Stradbroke and Moreton Islands for a serious hitout preparing themselves for QCYC’s other signature event, the Brisbane to Gladstone Yacht Race. Big seas and big winds separate the yachties from the softies, and this fleet always finishes many hours behind the smaller (in length only) inshore fleet.

The inshore crews like to think they are sailing a more tactical race through the Gold Coast and Moreton Bay Islands before they set their “Yeehah!” sails for the blast from Peel Island across Moreton Bay to the finish at Shorncliffe. The irony is that the water depth on the inside course is often about the same as the wave heights outside.

With a fleet of around 90, there will be plenty of bruised egos to be reinflated on the race weekend as many of the competitors lick their wounds after tough National Championship and Sydney to Hobart campaigns over the Xmas New Year break.

Starting with the inshore monohull fleet, there is a very serious contingent of the boy racer Leach 650’s, like Graham Sheerings trophy adorned Stay Tuned, and Damien Widdy’s Raw Prawn. The Spider 550 Shades of Grey , and the perennially popular Blazer 23’s will be fighting for line and handicap honours with some reinvigorated favourites like local favourite Anthony Smith on his rebuilt Rocket 780 Wildside ready to show some local knowledge across the paddock.

In a fleet surprise this year the multihulls get to share a couple of champion Raider catamarans across both courses. Joel Berg will be trying to nail inshore line honours down against Chris Wren’s modified Frequent Flyer, while the offshore fleet gets a flying visit from the red carbon super-raider Indian Chief, returned to us from Sydney at the hands of Julian Griffiths. That will be a serious stoush with globetrotting Asian waters champion Andrew Stransky recently challenging any offshore multihull to try and beat him and Fantasia on OMR handicap.

Other talent to watch in the inshore multihull fleet are Richard Pocock who has brought his F82R Redshift over with him in a move from Perth, and Neville Gumphy who is bringing his new Philippines built F-22R trimaran up from Sydney for the event.

The offshore monohull fleet handicap honours should be a battle between Peter Harburg’s (little) Blackjack Too, the glossy, fast, and bigger 50 footer Kerumba, or Bob Robertson still telling us he is retiring from racing while on the start line at the helm of Corroboree. There is also a very serious family duel this year with QCYC immediate past commodore Phil Lazzarini on his venerable Sassy trying to cross tacks with son Michael on the newer and faster Samurai Jack.

Whatever your favourites, the start at Southport will be worth seeing inside AND outside the Seaway wall. The racing on the inside course is more easily viewed by crowds enjoying extended happy hours on beaches from Jumpinpin to Nudgee Beach as the rocket-boats hit 20 knots, so join them there or at the finish line on Saturday afternoon right though until Sunday morning.