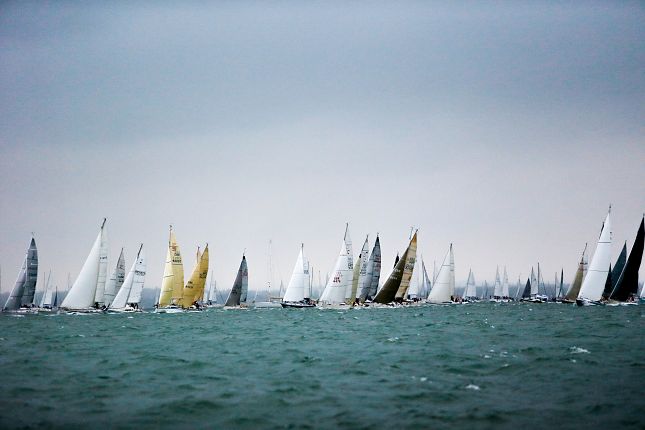 Four seasons in one day, a game of two halves, a bit of everything; you can pick your cliche, but the 2017 Round the Island Race in association with Cloudy Bay has certainly delivered on all levels.

Ultimately, it will be the MOD70, Concise 10 taking the lion’s share of the headlines, and rightly so as Ned Collier Wakefield steered the 70ft trimaran to a thrilling race record, shaving exactly a minute off the time set by Phaedo3 in 2016.

If the spotlight falls on Concise then the remaining accolades will surely go to Adam Gosling’s JPK10.80, Yes! which stormed round in IRC1 to take the biggest prize of the day, the coveted Gold Roman Bowl, awarded to the overall winner of the race on corrected time in IRC.

As is ever the case, the headlines struggle to do justice to a race full of stories and excitement quite literally from dawn to dusk – no mean feat just nine days post the summer solstice.

The morning dawned with little promise as a NNW wind in the high teens and some rain showers greeted the earliest starters, who were due to set off west, down the Solent and towards the Needles at 05:30.

At least the wind and rain helped wake the competitors up a little and perhaps wash away some of the excesses from the night before.

The early weather also conspired to give the 1342 racers a fast start, close reaching down the Solent with the tide beneath them; there were personal best times recorded to the Needles across the board.

Concise 10, the fastest boat on the water this weekend, started at 05:40 and made the Needles by 6:10 and went on to make St Catherine's Point at around 06:50. But it was not just the multihulls romping in the conditions, the monohulls were lifting their skirts and flying too.

The first monohull to round the Needles was the Volvo70 Sanya Lan at a little after 06:30. By the time 06:50 rolled around, some 200 boats had already passed the Needles, setting their spinnakers and heading off to St. Catherine’s Point.

By the time most fleets had reached the Needles the winds had moderated, the clouds parted and the sun was shining, if intermittently at first.

The first big news of the day was the finish of Concise 10 who’d had a thrilling lap as owner Tony Lawson confirmed: “It got pretty tense for me when we did 44 knots off St Catherine’s [Point],” he said. “That is as fast as you would ever want to go I can promise you that. That is faster than Sir Ben [Ainslie in the America’s Cup] by the way…”

That will be the second boat in so many months that Giles Scott, tactician on Land Rover BAR (and sailing today on Concise) will have achieved 40+knots.

Scott was not alone in terms of sailors from the upper echelons of the sport, with some of the finest sailors the world has to offer taking up the challenge of the 50nm classic. Alongside them were families sailing for fun, first timers and everyone in between.

For a long time it looked as though Irvine Laidlaw’s Reichel-Pugh 82, Highland Fling XI would take the coveted Gold Roman Bowl after they took line honours for the monohulls. But, ultimately no-one could match the might of Yes! who managed to take victory by just shy of seven minutes on corrected time. For a day where the margins had been tight all along it was an impressive performance and it would be hard to argue there was a better team out there today.

With a fast reach to the Needles and a moderating breeze, retirements were few and far between. Though there was the odd bump here or there on the way round, it was probably a race to be remembered for the lack of incident more than anything. Tribute should be paid to the Island Sailing Club Race management team, along with the huge volume of volunteers bring the Race to fruition today.

The finish remains open until 10pm this evening and there are still plenty of back markers to be counted over the line so final results will be a little time coming but the top three in each class can no longer be beaten by any of those remaining in the race.

It is hard to sum up a day such as the Round the Island Race but, handily the spirit of the event was captured before the start gun had even fired by Cloudy Bay Brand ambassador, Ben Fogle who was out racing on the Farr 52 Bob by Cloudy Bay today.

“I love the outdoors and have spent the best part of 20 years exploring the world and exploring what we can do in it,” he said. “There is something so beautiful about the sport of sailing and working with the weather. So much of modern life is about what man is doing to destroy it and yet here we are showing the complete opposite. When you combine that with the heritage and the great social aspect, well, that is just a wonderful thing.”

Don't forget to nominate any worthy recipients of the MS Amlin Seamanship Award direct to the Island Sailing Club. This is not restricted to sailors, but can be open to anyone who has shown exceptional seamanship or onshore assistance during the Round the Island Race.

Lastly, we are delighted that Sir Keith Mills, owner of Invictus and founding Shareholder of the Land Rover BAR America’s Cup team, will be joining us at tomorrow’s prize giving ceremony at the Island Sailing Club at midday Sunday 2 July.

TENACITY TROPHY – Last boat to finish within the time limit