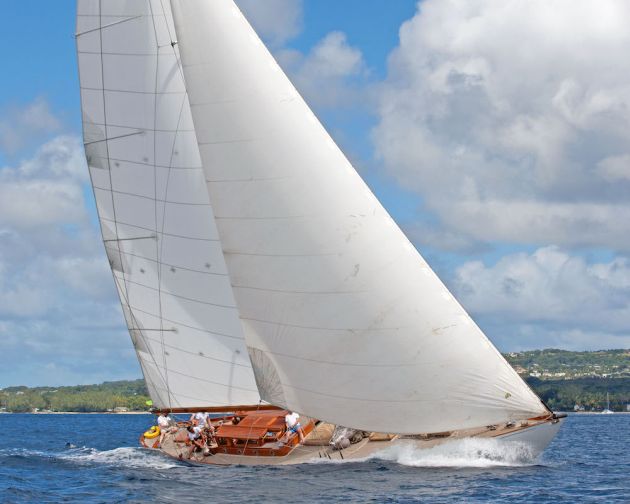 The weather is looking good for record-breaking too with winds forecast to reach 28+ knots. It looks as though the wind will be from the north-east for the early starters for the stretch to north point, then at midday it should turn east to provide an exciting sail all the way down to coast to east point.

Organised by Barbados Cruising Club in association with Barbados Tourism Marketing Inc, and Mount Gay, this historic race, which ran for the first time 80 years ago was based on bragging rights for the fastest Trading Schooners. The winner of the first race was Captain Lou Kenedy’s Sea Fox, which completed the course in 10 hours 20 minutes.

The current absolute record for Multihulls, set by Bryn Palmer on Silver Bullet in 2012, is 4 hours, 24 minutes, 27 seconds, while the absolute Monohull record with a time of 4 hours, 42 minutes, 20 seconds is held by Andy Budgen’s VO70 Monster Project. There are also 12 other records up for grabs, all of which offer the skipper’s weight in Mount Gay Rum as a prize if broken.

The line up tomorrow is impressive with the likes with two world-class MOD70s – MS Barbados Concise 10, skippered by Ned Collier Wakefield, and Phaedo3 co skippered by Lloyd Thornburg and Brian Thompson threatening to annihilate the records. The smaller multihulls are ready for action too, with Silver Bullet already signed up, and sparring partners on Team Concise 12, the Diam 24 trimaran, hopefully taking part too.

The MOD70 Phaedo3 team who took line honours and a class win in the recent 3,500 mile RORC Transatlantic race with a time of 5 days 22 hours, 46 minutes, 03 seconds are looking to repeat their speedy performance. Commenting on his presence at the event, Thornburg said: “I am excited to be here, Barbados is such a beautiful island, the team and I am looking forward to racing around the island.”

MS Barbados Concise 10’s Paul Larsen, who has a history of sailing some of the wildest race machines ever to grace the oceans, including Vestas Sailrocket where he broke the outright world speed sailing record (65.45 kts), says it will be a tactical race. “Phaedo is quick but we have a few tricks learnt from out training, and if you ask me, it is all going to go to the wire – one gust could sort out the winner. Blasting along, side by side at over 30 knots of boat speed – it is going to be all on!”

Others to watch out for include the Farr 72 – Maximizer, a Custom 24 – Ocean Phoenix, and the Farr 65 – Spirit of Juno (Farr 65) in Class 80 and under, while the TP52 Conviction representing the Barbados Offshore Sailing Syndicate (BOSS) is hoping to defend the 60ft and Under Monohull Round Barbados record from last year.

Jason Tindale and the young team aboard the J/24 College Funds who established a class record last year with a time of 9 hours, 6 minutes, 38 seconds is another hoping to defend their title. However, they have some added competition in class this year with Bunga Bunga and Glory Daze, fresh from three days of intense Coastal Series racing, hoping to snatch the title.

One of the first to start tomorrow at 0700 is Ruth, the locally built 33m schooner. This impressive vessel, which was built on the beach in Carlisle Bay, and the design of which is based on the Canadian grand banks schooner Bluenose, is a working cargo ship that uses historic Caribbean regional trading routes. She also provides training opportunities for 18-25 year olds.

Two of the prettiest boats on the line at 0900 will be the Alfred Milne-designed The Blue Peter and Galatea – a Bermudan Yawl-rigged, 1899-built classic. Others to watch out for before they zip through the start line at 0900 are the two windsurfers – Trevor Hunt on his Phantom Batwing 377 and Cornic Fabrice on a Fanatic.

Hunt who holds the official race record, and his personal record of 4 hours 48 minutes says the weather looks good. “Last year it was light and lots of seaweed around but this time we are going to smoke. I can do 34kts in any wind, so it’s going to be a blast. The aim is to get the record, and be back in daylight to enjoy a rum back onshore.”

Finally, mention must be made of the most senior member of the fleet, 85-year-old Jerome Reid, who is sailing his 1984-built Van de Stadt 24 design Jump-up solo. Reid, who has competed in the last two races, commented: “The plan is to race, but I will make a final decision on the day. I will see what I feel like. I love the sea and love sailing my 24ft boat. She is great, and good ocean-going boat so I feel quite confident to race her round the island.”

With over 20 yachts taking part, there’ll be staggered starts from a committee boat line just off the Barbados Cruising Club commencing with the slowest boats at 0700, which means there’ll be plenty of opportunity for race followers to view the action from the beach.

The course will take the fleet clockwise round the island towards North Point. The most testing conditions are likely to be on the rugged east side of the island where there is big swell.

As well as using lay day to make final preparations for the big race tomorrow, teams were given the opportunity to visit to the Mount Gay Rum Distillery earlier today and spend the afternoon soaking up the colonial-style hospitality at an exhibition polo match at Holders Polo Field.

To watch the progress of the race click here for live tracking on the event website: http://mountgayrumroundbarbadosrace.com.