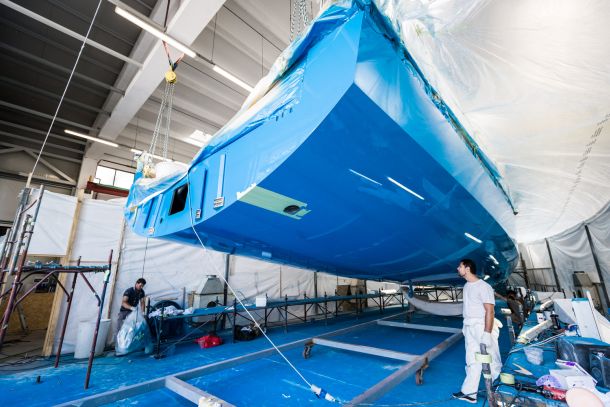 ALICANTE, Spain, May 22 – Team Vestas Wind’s (Chris Nicholson/AUS) incredible journey to re-join the Volvo Ocean Race was nearing its final lap on Friday when the rebuilt Vestas Wind emerged out of the Persico boatyard ready for the trip to Lisbon.

Australian skipper Nicholson hailed the return to the event as ‘a modern day miracle’ after the team’s Volvo Ocean 65 smashed into an Indian Ocean reef on November 29 during Leg 2, and was initially considered a write-off. In a huge logistic operation managed by GAC Pindar, the boat was skilfully hoisted off the rock and coral reef on to a Maersk Line ship, and transported via Malaysia to Perisco’s yard in Bergamo, Italy, for a rebuild.

The team had long planned their target to be on the start line of Leg 8 departure on June 7 from Lisbon to Lorient, France. It was always, however, a very ambitious goal. A full build of a new Volvo Ocean 65 takes around eight months to complete – the transformation of Vestas Wind from a wreck to a fully-compliant, one-design, race boat for the world’s leading offshore race, has taken four months.

The boat’s emergence into the Italian sunlight on Friday, ahead of its loading onto a truck for a midnight start to the journey to Lisbon, was witnessed by Nicholson.

“It’s good to be on the move. We’re getting out of here. It’s the right time. We’re one day in front of schedule and hopefully we have a faster shipping time, which might actually mean one or two extra days out on the water before our start in Lisbon. So it’s all good,” Nicholson said. “You think of the journey everyone has been on since the reef and to be here with a boat functioning, ready to go, is a huge achievement for everyone. There were so many things along the way that almost stopped us completely. It’s effectively a new boat. There were some old bits from our previous boat – I’m still not sure what to call it. I don’t know whether it’s our ‘new boat’ or our ‘old boat’. I guess it’s going to be a combination of the both.”

He paid handsome tribute to the workers of Persico for completing the mission of returning the smashed boat to the start line in such a short period of time.

“If you had sat back at the start and looked at it on paper, you wouldn’t have taken it on,” he said. “Persico were taking on risk to do this project. I take my hat off to them for what they’ve done. They’ve made a modern-day miracle. It’s a huge, huge effort from them. Without these guys, it wouldn’t have happened.”

The team plan to transport the boat by ship and truck to Lisbon by midweek in time to reunite with the rest of the fleet, which is expected to arrive in the Portuguese capital around May 27.

Meanwhile, in mid-Atlantic, any one of the six boats in the racing fleet could be first into port after the thrilling, 2,800-nautical mile (nm) Leg 7 from Newport, Rhode Island, which has been contested head-to-head so far.

Later on Friday, the fleet faced a key decision on how to deal with the Azores High. Most of the weather models showed that a northern course would pay in terms of more wind, but the southern route was more direct to Lisbon.

Abu Dhabi Ocean Racing, protecting a six-point lead over Dongfeng Race Team in the overall leaderboard after six legs, will be tempted to play safe and stay with the main pack.