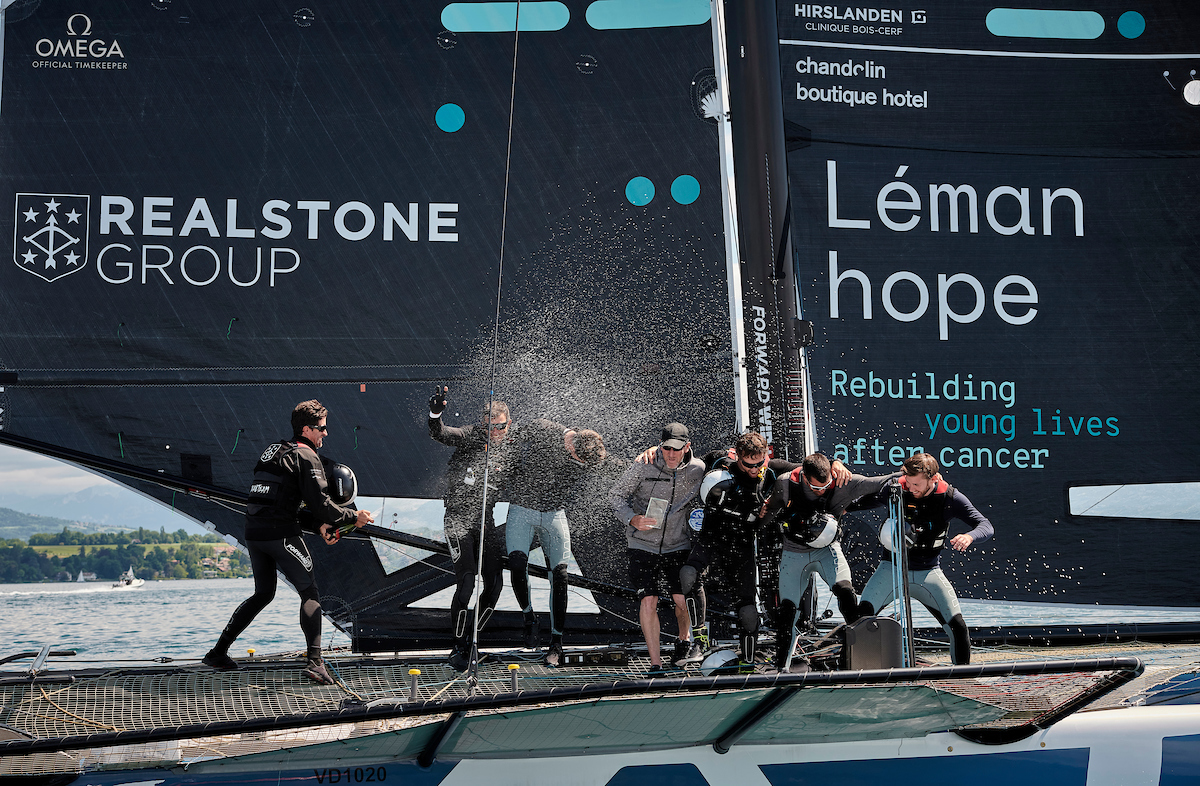 Realteam Sailing, owned by Esteban Garcia and co-skippered by Jérôme Clerc, triumphed on the final day of the TF35 Mies with wins in both races before a lack of breeze ended the day early.

Clerc started the day in second place, four points behind overnight leader Ernesto Bertarelli on Alinghi. The opening race got underway in light conditions but easily race-able by the nimble TF35s.

In this Realteam lead from a clean start whilst closest rivals Alinghi got caught in fleet congestion. A challenge from Erik Maris’ Zoulou at the second windward gate saw Realteam Sailing momentarily lose their lead, however with Zoulou needing to put in an extra gybe to cross the finish line, it was Realteam that took the win.

“It was a magnificent Grand Prix at Mies this weekend,” said a beaming Clerc on the dockside. “We were very consistent on Friday, but it wasn’t enough to take the lead. Today we tried to relax into it and had two victories.”

Realteam Sailing again performed a perfect start in race two but was challenged this time early on in the first beat by Loïck Peyron at the helm of Team SAILFEVER. Clerc and his crew, however, were untouchable as they extend away and led to the finish line.

“We are reaching our objective for the season, the fight is there, but all the teams are playing for the win, so we mustn’t lose focus. In a week, it’s the Bol d’Or Mirabaud and we want to win,” Clerc added.

Today rounds off three days of exciting racing, which saw three different teams dominate over the weekend. Day one of fleet racing belonged to Alinghi, which claimed an impressive three out of a possible five race wins.

Day two was a change in format for the TF35s, and it was French team Zoulou which prevailed, beating the local Swiss crews to win the iconic Genève-Rolle-Genève long-distance race.

Realteam Sailings victory today not only hands them the TF35 Mies trophy but breaks the tie in the overall ranking, with Alinghi falling to second place by one point.

Erik Maris’ Zoulou takes third place in the TF35 Mies after a successful weekend that saw him win his first fleet race at the helm of a TF35 and claim line honours in the Genève-Rolle-Genève.

Of the remaining standings at the TF35 Mies just six points separate first to fourth-placed Spindrift. Bertrand Demole’s Ylliam XII – Comptoir Immobilier is fifth and finished today on a high with a third in the final race. Team SAILFEAVER takes sixth and ZEN Too seventh.