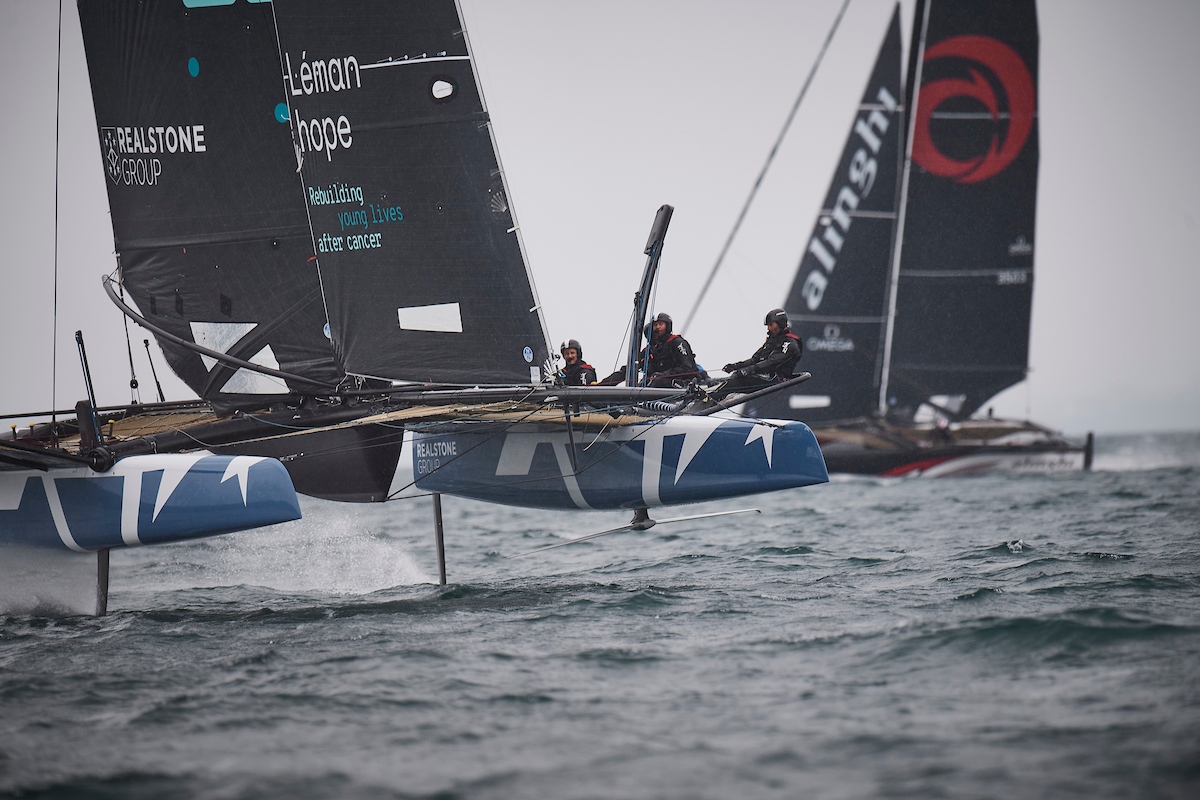 RealTeam had the goods on Day 2 - Loris Von Siebenthal pic

While on day one there was no stand-out team, today Esteban Garcia’s Realteam Sailing, co-skippered by Jérôme Clerc, had the bit between her teeth, posting an almost perfect 1 1 2 1 scoreline.

Race 1 got underway in a steady 15 knots, and the Swiss crew was alone for a pin end start. Hitting line at speed and in clear air, Clerc took the flying TF35 to the port tack layline, crossed ahead of the fleet, and lead around the top mark with Spindrift in hot pursuit.

The two boats remained in front at the leeward gate where they split: Spindrift, caught in a match race with Bertrand Demole’s Ylliam XII – Comptoir Immobilier, allowed Realteam to extend and take the win. Alinghi pulled up from fourth to finish the race in second. Spindrift helmed by Xavier Revil taking third.

It was a repeat performance for Realteam Sailing in the second race of the day. Arriving late to the start, Clerc hooked the committee boat and shot out on port tack alone, committed to the right and came into the windward gate ahead of the fleet, the position they held until the line.

On the dock after racing Realteam Sailing’s tactician, Sébastien Col was buzzing from the day: “Racing on the TF takes your full focus, it’s very physical, it’s real teamwork, and that’s why we do this type of sport. To be racing at these speeds against this level of competition is pretty cool.

“The game is very close with Alinghi. Tomorrow we will have the same conditions, so it is not over, but we are happy with how our day went.”

Chasing Realteam Sailing hard in every race was Ernesto Bertarelli’s Alinghi. Race three today was their opportunity to break the string of second-place finishes. Alinghi and Realteam were evenly matched at every cross after they split from the start line.

It wasn’t until the final beat that Bertarelli squeezed a bit more boat speed out of his TF35 and gained enough of an advantage to force Realteam to duck them, ultimately allowing them to take the win in a photo finish.

The fourth and final race of the day saw the strongest breeze so far this season and much more compression in the fleet with Spindrift, Zoulou and Team SAILFEVER all in the mix for third and fourth-placed results. The owners relishing the conditions despite the rain thanks to the TF35s technology that allows for stable flight in winds that today topped 18 knots and over 30 knots of boat speed.

Today’s performance means Realteam Sailing now leads the TF35 Nyon, but is just two points ahead of Alinghi while just four points separate Spindrift in third and Zoulou in fourth.

The final day of racing tomorrow (Monday local time) is scheduled for a first warning signal at 11:30 CET. To follow the racing live visit tf35.org

Results after two days and seven races with one discard: