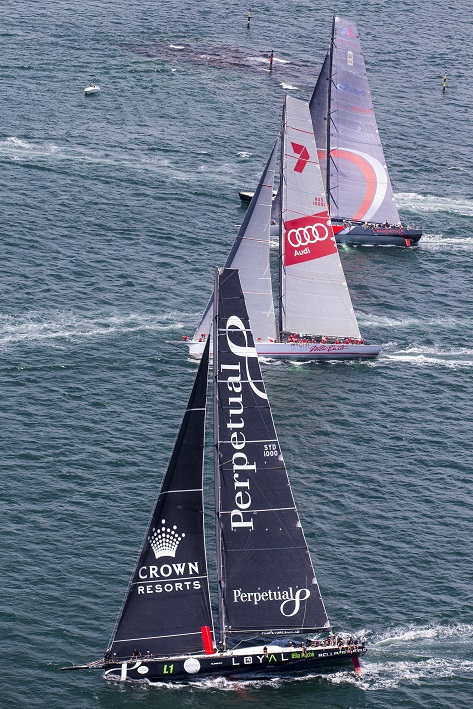 Trickle down technology, it is a phrase we hear a lot in the marine trade. Over the years events like the America’s Cup, Volvo Ocean Race and Vendee Globe have all seen breakthroughs in technology that have made their way onto the commonplace production boat. Even in the last America’s Cup watching those massive foiling craft racing around, who would have thought that would have any relevance to the everyday sailor. Yet already we are seeing semi-foiling production boats begin to appear.

Not only foiling but technology in mast design, construction techniques, sail profiles and mechanical systems are all pushed to the limit. All these developments are about making the boat go faster. But in the cases of endurance racing like the Vendee Globe and Volvo Ocean Race it can have real benefits in longevity which directly assist the greater yachting fraternity.

The images and footage of the Vendee Globe in particular have enthralled all sailors. Blast reaching at incredible speeds across the southern oceans in strong winds with several combinations of headsail and deep reefed mainsails, truly spectacular viewing.

A multiple headsail configuration have always been known to be very fast once the sheets are sprung. Looking back through the old black and white photos of early days racing under RORC and IOR rules, boats would quite often feature cutter rigs for passage racing. There are several reasons for this, the primary ones being the turbo slot or Venturi effect between the sails, reduction of helm load and better righting moments.

The development of different styles of furling and reefing have made a lot of difference to the deployment of sails. Setting and retrieving a sail on a screaming reach has always been a hard task and often quite dangerous! With single line furlers, top down furlers, spinnaker socks and temporary spectra forestays this world has become a whole lot easier. Let’s look at some of the sail types becoming popular on the modern day ocean racer.

The code 0 sail which was first seen on Chris Dickson’s Volvo 60 Tokio and was later refined by Paul Cayard on EF Language to be a race winning “must have” sail. It is now popular and has many different configurations in both the racing and cruising world. Measured as a spinnaker for racing, it is a powerful light air sail and an integral part of the racing wardrobe.

The success of the code 0 type sail led to the development of this sail. With the delivery of so much more horsepower, it wasn’t too long before the boat became overpowered as the wind increased. A smaller more versatile little sister to the code 0, it can be carried as close to the wind as 55 degrees in light airs up to 10 knots and even be use in as much as 30 knots on lower angles, often with a double reefed main and jib staysail. The advent of specialised furlers for all the code 0 style sails has made them incredibly easy to launch and recover.

As the numeric number implies (A = asymmetric and the larger number=smaller sizing) the A7 is what experienced sailors refer to the old fashioned “chicken chute” or heavy weather kite. Very small and stable for use in 30-45 knots, crews who use them are amazed at how controllable they make the modern day racer. Once again able to be used with multiple reefs in the main, provides the ability to really “send it” with minimal risk.

The staysail tends to fall into two categories, spinnaker and jib. As the name suggests the spinnaker staysail is more of a downwind sail set under the spinnaker on a furler. It provides some extra horsepower and is a relative full sail usually made from a soft laminate code 0 cloth. The jib staysail is a different beast all together. Used at higher wind angles, this sail sheets on the jib tracks and needs to be set on its own temporary inner forestay. Approximately 50% of the jib area has battens and is best with a fat head design for easy twisting off, the fathead and battens make it impractical to furl, hence the need for its own forestay. With the bullet style connectors now available it is a cinch to set up and with soft webbing loops permanently pre-stacked it can be raised and dropped with minimum inconvenience. The jib staysail can be used as part of many reaching configurations under everything from A3 spinnakers to J4 jibs!

The Jib 0 is a fairly recent development. Measured as a headsail rather than a spinnaker it is a lot smaller than the other 0s. It is set from the same tack attachment point at the end of the sprit in front of the forestay and sheets off the spinnaker sheets, preferably with a down hauler for optimum trimming. To a large extent it replaces the jib top sail, and once again with a furler is easy to use. Reaching along with the jib staysail, standard Jib and J0 all set up, it is easy to quickly switch between configurations ensuring the boat is always at its optimum.

This new generation of reaching sails are becoming more commonplace and even the fully crewed ocean racer is beginning to look more like those amazing Vendee Globe boats with multiple sails set before the mast. Want to get turbocharged? Have a chat to your sail maker about these latest developments. Trickle down technology has made them effective and user friendly.