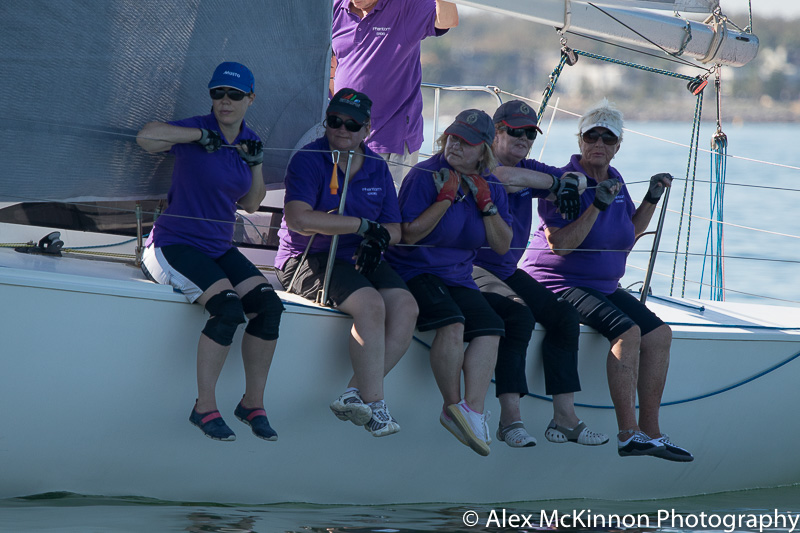 Race day three of the Port Phillip Women’s Championship Series was hosted by Royal Melbourne Yacht Squadron (RMYS) on Sunday, 19 March. Also known as the Jennifer Goldsmith Perpetual Trophy this race is open to any yacht but must be skipped by a female helm.

The late Jennifer Goldsmith was a keen sailor and the first female recipient of the Club Member of the Year Award for RMYS. Her family now sponsor this ‘Lady Skippers Race’ to encourage female sailors to get into racing. In addition to this race requiring a female helm, all entry fees collected for this event are donated to melanoma research.

The Jennifer Goldsmith Trophy was run as an 'around the sticks' course using RMYS permanent club marks placed around the northern end of Port Phillip Bay. Racing began in a marginal two knot North- Easter where persistence was key when after nearly 40 minutes the fleet began to round the first (top) mark. After another 20 minutes and 50m later, the fleet welcomed a slight build in breeze from the South.

Celia Dymond, skipper of ‘Jungle Juice’, made a call to go the opposite direction to most of the fleet and it worked. ‘Jungle Juice’ took the win in YV Handicapping and was second over the line. Celia said,

“It was a tough day out there and my crew did an amazing job! It was challenging to keep the boat moving but I love these light conditions so I quite enjoyed the racing. There were huge patches of no wind on the course so it was important to strategise what direction we wanted to take. We chose to separate from the fleet and it payed off. We were neck and neck with Monica and her Adams 10, so it made for good racing out there! Thanks for the effort of the crew and we look forward to the next PPWCS race.”

Monica Jones, on the other Adams 10, took line honours and secured the win in IRC. Monica also leads overall for the Port Phillip Women’s Championship Series in AMS, IRC and PHS. Claire Scanlon, skipper of ‘Silhouette’, secured the win in AMS on Sunday. Claire said,

“Sunday’s conditions were very tricky! After the first mark, the wind swung and our downwind turned into a reach so we had to drop our kite and continue sailing to the next mark. Our aim was to just keep the boat moving and minimise the number of tacks we needed to do. We decided to stay in the bay rather than go to shore and I think this helped! This is always a very well organized race and we look forward to coming back next year.”

Hobsons Bay Yacht Club are set to host Race Day Four of the Port Phillip Women’s Championship Series for the Shirley Freeman Trophy and the Bellissima Cup on Sunday April 2.