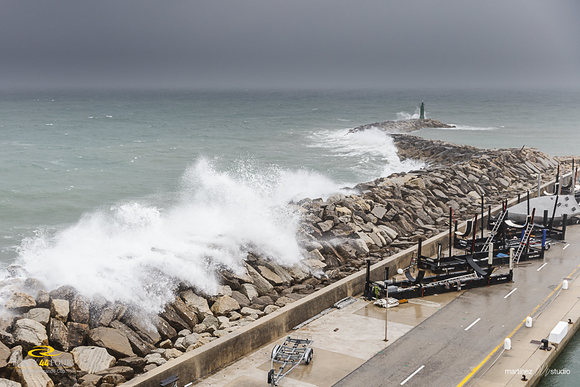 Not much sun at the Costa del Sol. Photo Martinez Studio.

Rain of Old Testament magnitude descended on Spain's Costa del Sol for day two of the RC44 Sotogrande Cup. While the wind was not excessive, the sea state decidedly was.

Even as RC44 crews and race management surfaced for their breakfast this morning, it was evident that the onshore easterly breeze, that had been blowing all night, had caused the sea state to build to the extent that waves were already breaking over the harbour wall.

RC44 Principal Race Officer Peter 'Luigi' Reggio managed to venture out of the harbour this morning to assess the washing machine-like situation: “The wind isn't the issue, it's the waves,” he explained. “The sea state is so bad that some really serious damage will happen if we send them out. They have to go upwind against those waves just to put up their mainsails and it's really impossible. Also, it is low tide and the waves are so big that we're afraid in the troughs the boats might hit the bottom. And it is just going to get worse – the waves are forecast to build this afternoon so then getting the boats in will be even more impossible than it was getting them out.” 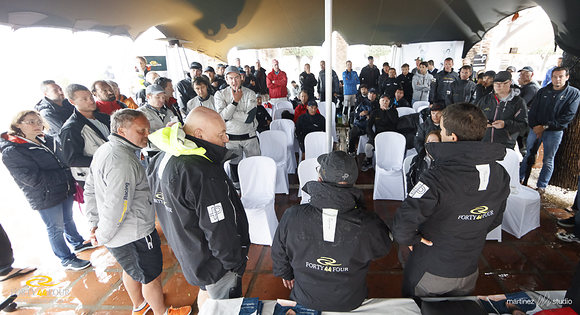 And so, to applause and unanimous relief from the crews, Reggio announced the cancellation of racing for the day at the morning skippers' briefing.

2016 RC44 Championship winner Team CEEREF's Igor Lah agreed with the call. “I think it was the only possible decision considering what is happening outside. It is a pity not to sail, but it was impossible to do it. I just hope tomorrow will be better.”

Team Aqua's Chris Bake concurred: “It was a good idea. Getting the boats out of the harbour and getting them launched would have been pretty hairy. We were thinking we could go and run around a bit but on reflection probably not. But this is our sport – you just have to dial in and get on with it.”

Tactician on Team Aqua, Cameron Appleton, also welcomed the announcement: “It was the right decision. Safety is always a concern and the sea state is exceptionally high with breaking waves and a lee shore and no room to run away. Plus it is only the second day of the regatta and we need to get another two days in after this. So we are happy…and obviously it is raining too!”

Peter Reggio intends to start on time tomorrow, Saturday, at 1130, for the penultimate day of racing. “We hope to go on time. There'll be significant left over slop, but we'll have to deal with it,” he concluded.