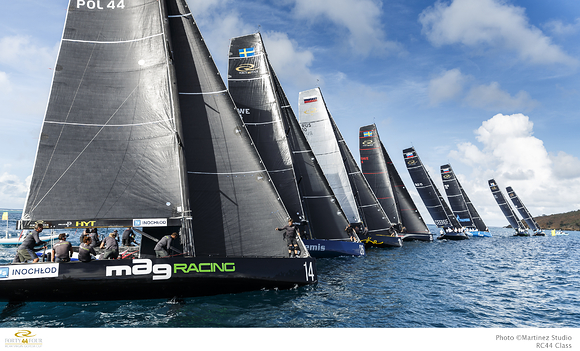 The stage is set for the opening regatta of the 2016 RC44 Championship Tour, with some of the biggest names in the world of professional sailing and international business lining up on the starting grid for the RC44 Bermuda Cup, from the 2 – 6 March.

The team to beat in 2016 is undoubtedly Team Nika. Defending both his 2015 World Champion and 2015 Fleet Racing Champion crown, owner Vladimir Prosikhin is pulling-no-punches in 2016 with American sailing legend Ed Baird joining the crew. As the only American helm to win the America's Cup since 1992 Baird's list of achievements is extensive, with multiple world championship titles and a several years with the RC44 fleet under his belt the team are a formidable force for 2016.

But contesting Team Nika's lead every step of the way Vladimir Liubomirov's Bronenosec Sailing Team has been a consistent challenger for the podium over the past two years, finishing 2015 as Match Racing Champions and runners up in the Fleet Racing. Liubomirov is joined by an experienced crew of Italian and Russian sailors once again headed up by Michele Ivaldi.

Bursting back on to the RC44 scene in 2015 and leading the mid fleet charge, Igor Lah's Team CEEREF finished the year in fourth tied on points with John Bassadone's Peninsula Petroleum Sailing Team.

With the cool calm British Olympian and multiple world champion Adrian Stead retuning as tactician for Team CERREF and legendary hot-headed Italian Vasco Vascotto calling the shots for Peninsula Petroleum the RC44 Bermuda Cup will be the first opportunity for the two teams to go head to head in the race to break onto the podium.

Onboard Artemis Racing Youth, Sweden's most successful sailor Freddy Loof and British Olympic gold medallist Paul Goodison use the Class as a platform to encourage young Swedish sailors into the world of professional racing. Both teams will be hoping the wealth of local knowledge their sailors have gained from training out of their team base ahead of the 35th America's Cup will give them the competitive edge needed next week.

The Russian team Katusha completes the line-up, with new owner Alexander Novoselov in the driving seat and experienced tactician Andy Horton hoping to continue their upward trajectory through the fleet.

The RC44 Bermuda Cup will kick off with a day of match racing followed by four days of fleet racing on the Great Sound.