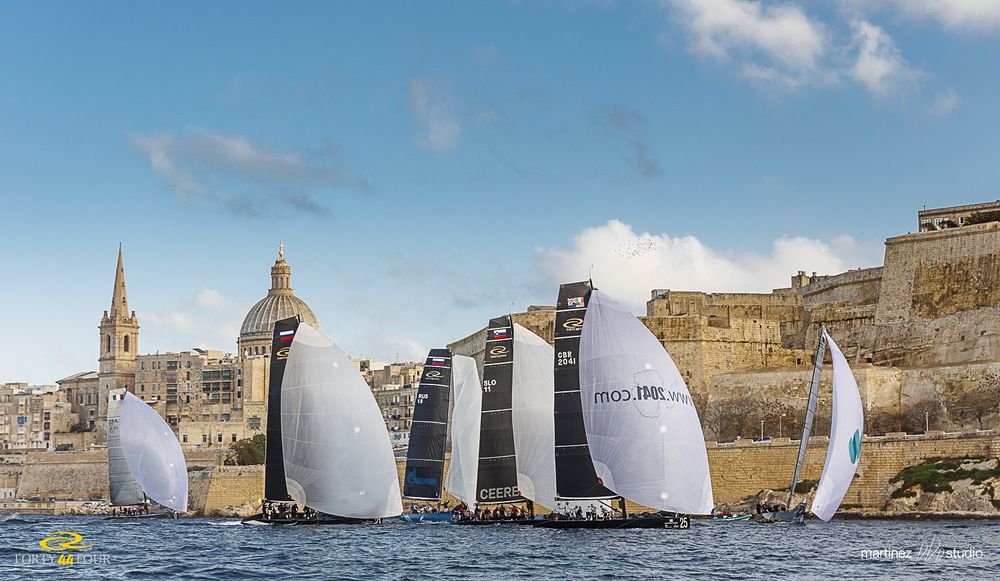 Tomorrow not only will the winner of the RC44 Valletta Cup be decided, but also 2016 RC44 Fleet Racing Champion. Three more races were held today and, with a further three scheduled tomorrow, the RC44 Valletta Cup is lining up to be a three, or possibly four, horse race: Chris Bake's Team Aqua currently holds a slender one point lead over Igor Lah's Team CEEREF, in turn two ahead of Alexander Novoselov's Katusha, with Torbjörn Törnqvist's Artemis Racing a further five points back in fourth.

Generally conditions were light today with the offshore breeze from the north-northeast, dropping to around seven knots at the leeward gate close into the shore, but fortunately building to an unforecast 10-12 knots for the final race.

After an average performance yesterday, Igor Lah's Team CEEREF was back on song today. She won the first race and followed up this with a 3-4 – by far the most consistent results of the day.

“It was fantastic but incredibly tough – I am very tired!” admitted Igor Lah. “Yesterday we had a bit of bad luck in the second race when we gybed when we shouldn't. Otherwise we are sailing well. I am happy with the crew work.”

Team CEEREF's British tactician Adrian Stead looked equally shattered but was pleased to have fought back to within a point of the leader. He summarised their day: “We had to be bold in the first race to get ourselves back up and we got a good win in that one. The second race was a bit more of a fight. We thought we'd read the first beat well, but rather thank leading our side we ended up fifth. Fortunately we turned that into a third.”

Today's third race was special as it finished off the Excelsior Hotel inside Marsamxett Harbour, with Valletta's towering ancient ramparts forming a spectacular backdrop. But for Team CEEREF it was the hardest of the day, as Stead explained: “We got into a jam with Team Aqua coming into the top mark. We figured we'd make it difficult for them, but we ended up getting a penalty. We did our turn well and were even with them exiting the mark. Then with the harbour finish we knew it was going to be a VMG run in and we just had to keep it close. We came around the last mark in seventh with three boats in front of us, and in the harbour the starboard advantage paid.” They rolled around a group of boats immediately ahead of them to finish fourth. “We kept it alive – that was the key,” Stead concluded.

Conversely, after their perfect score line yesterday, Team Aqua was at one point last in the first race, but managed to claw back an eighth. Chris Bake's team followed this with two mid-fleet results and had to face the dwindling of the nine point lead they had so spectacularly built up yesterday.

Following their two bullet opening to this regatta, Katusha was also back on form today, winning the second race, while finally Vladimir Liubomirov's Bronenosec Sailing started demonstrating some of the consistency for which the normally impeccable Russian team is renowned, posting a 2-3 in today's first two races.

Having a decidedly up and down regatta is John Bassadone's Peninsula Petroleum, which in the last four races has twice finished last, but today ended on a high for the Gibraltar-based team, winning the final race, first across the line in the harbour finish. Artemis Racing finished behind them in second, but had started the day with a 7-8 leaving them with work to do tomorrow.

Artemis Racing's Torbjörn Törnqvist said of their day: “It was so-so. It was difficult and we had two not so good races and one good race, but most of the fleet had the same experience. It was difficult conditions. It is very tight at the top and anything can happen. Still, there is one day to go and the regatta is still wide open.”

The final day of racing gets underway tomorrow at 1130 local time and as Igor Lah put it: “It will be a big battle. I can't wait for it.”