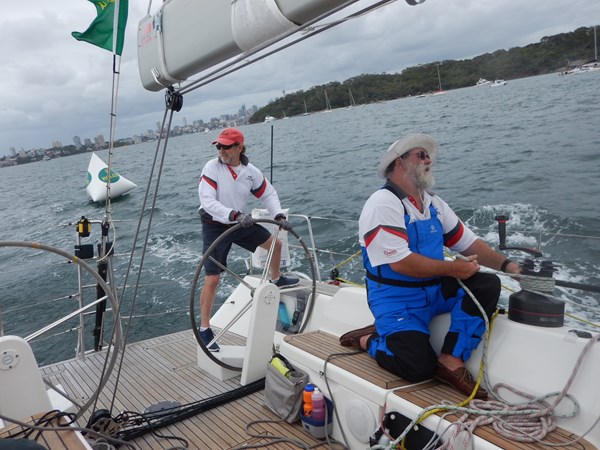 Having long hair as a sailor can be a major inconvenience. It can get caught in blocks, flicks into your face and often at the end of the day spent on the water it is one big, knotted clump.

But this didn’t stop RANSA’s (The Royal Australian Naval Sailing Association) Vice-Commodore and avid sailor Les Goodridge from growing his hair, not just for one but for two worthy causes.

Goodridge has been growing his hair for the last three years. What first started out as a novelty, soon became something more.

“I was in the navy for most of my life, and the defence industry. I’ve never really had long hair,” Goodridge said. “I let it grow for a year or so. And then the idea of growing it a bit longer in order to cut it and donate it came to the fore in the second year.”

Goodridge’s hair now resembles Tarzan’s, with his impressive mane longer than 35 centimetres in places. This Sunday, July 11, his wife Cathie will cut off the long locks. They had initially planned for the event to take place at RANSA, where Les has been a member  for 38 years. However, due to current COVID-19 restrictions it will be a private affair.

Goodridge’s hair will be donated to the children’s charity Variety Australia.

He said, “They do a great amount of good helping children dealing with cancer and it’s difficult to get access to good hair.  A number of people’s hair will be combined  to make a really good wig for a child living with cancer.”

And that is not where his good-will stops. He is also raising money for the Sir David Martin Foundation, a not-for-profit organisation that helps young people overcome unfortunate circumstances. This foundation has been part of Goodridge’s life for some time.

“I actually served with Sir David Martin on HMAS Melbourne in the 1980s, that was before he became the NSW Governor. And I’ve been privileged to listen to some of the teenagers who come out the other end of his Foundation, and it seems to have a high rate of success which is very heartening.”

The local sailing community has thrown its support behind Goodridge. Goodridge’s X-50 yacht Wax Lyrical has been at the Cruising Yacht Club of Australia for almost 10years, and participated in her first Sydney to Hobart Yacht Race in 2014.

“People have seen me wandering around with the hair and have found out only very recently why I was doing it,” Goodridge said. “People from the CYCA, RANSA, the navy and a few other places were very pleased to donate. It has been a very positive experience for me and the people around me have been positive about me doing it, which has been great.”

“I’ve got a couple of beanies to cover the head this winter.”

Goodridge has a fundraising target of $9000, and has already raised more than $6000. For more information and to donate, see: https://www.martinfoundationcommunity.org.au/users/les-goodridge