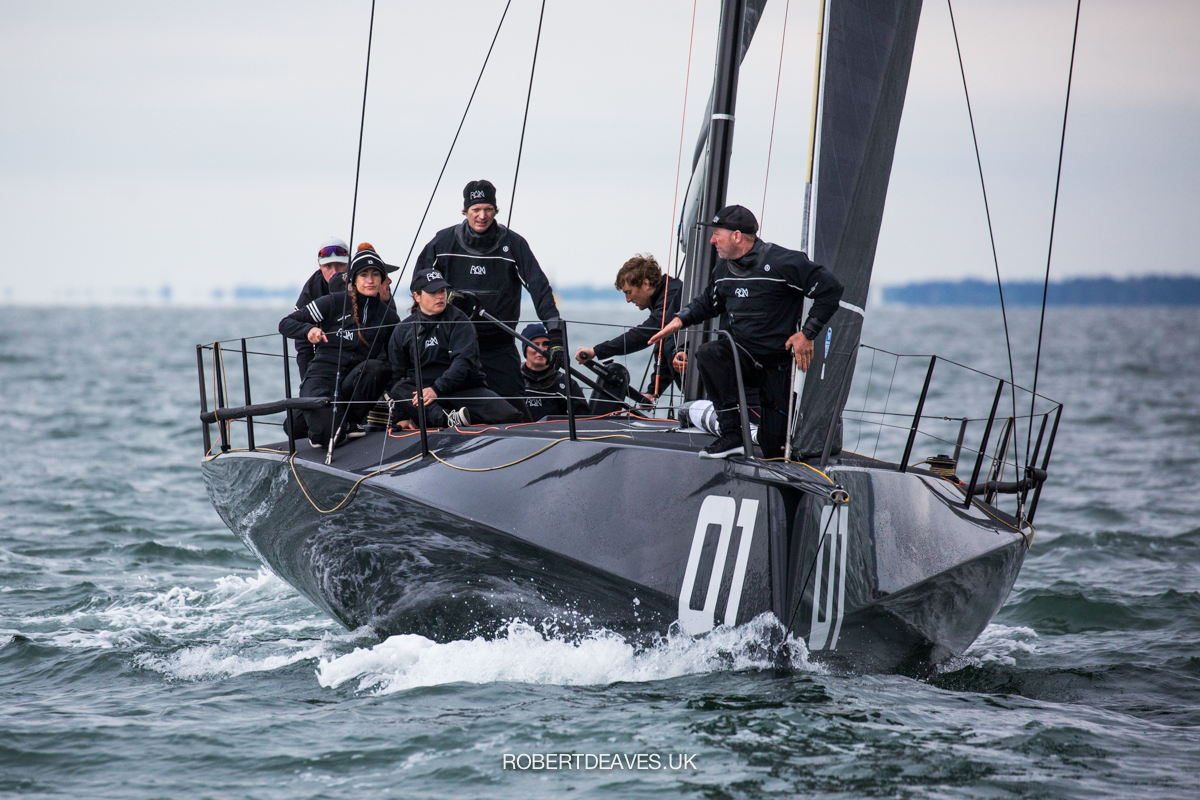 Round 2 of the Fast 40+ 2021 Race Circuit concluded Sunday in Cowes with a win for Niklas Zennstrom’s Rán, from Peter Morton’s Jean Genie and Christian Hamilton/Guy Gillon’s Khumbu, with no more races possible on the final day due to lack of wind.

Held as part of the RORC IRC National Championship, the British summer excelled again with some appalling and unseasonal weather, but some close, competitive racing throughout the fleet. The final day started cold and wet and ended hot and sunny, but the wind evaded all the race committee’s attempts to start racing and the fleet was sent home just after 13.00.

While Rán was clearly the boat to beat, she only pulled out two wins over the long weekend in generally light winds.

Toby Iles has been sailing on Rán since the start of the 2018 season. His role on board is as the up and down trimmer.

“Tim Powell, who runs the Rán program for Niklas and Catherine, and whom I have sailed with on different boats over the years, asked if I would like to join in.”

“The pro-am idea is a great model for the class, providing a different dynamic to a team, and a more fun and less pressured environment – but without losing anything in the skills and talent onboard.”

“More specifically for Rán, it provides the ideal platform for Niklas and Catherine to give talented younger sailors the opportunity to race on board these fantastic boats.”

He summed up the Fast 40+ class as, “Take a TP52, improve on it, and then shrink it a little bit. What more could anybody want for the perfect race boat?”

John Coffey has sailed on board Redshift for three years, after previously sailing with Ed Fishwick on a Sunfast 3600.

“I’ve sailed with Ed for five years now, and 10 with the boat captain, Nick Cherry. Nick asked me to join the crew as pitman. I’ve done pit all my life.

“Coffey came through the Bear of Britain program, as well as TP52 and says he has sailed “20 years at a decent level,” Fishwick said.

On Redshift’s modifications: “I think they still have to prove their worth offshore. We haven’t seen the best of them yet. There are still a few things in the bag, but we are thrilled it’s up and running and we are back sailing.

“After a debrief following the Vice Admiral’s Cup, we are aware we were behind, but we reduced sail area for the IRC rating. We are spending time getting used to new systems, but we were close,” he said.

It’s a big learning process but we are getting there. The racing is close, but we hope we haven’t compromised ourselves too much focusing on IRC and offshore. The longer the race is the more benefits we have.

“The pro-am model of the class is really important. There’s nothing quite like trying to get better and learning continuously from the people we have on the boat. It’s a really, really good thing for the class,” Fishwick said.

During the pandemic, when travel is hard, he sees the class as really appealing. “In this current time, we are racing against the best in the world in the Solent. Seeing and sailing with these owners, who could be in TP52s, going to head-to-head is a great privilege.”