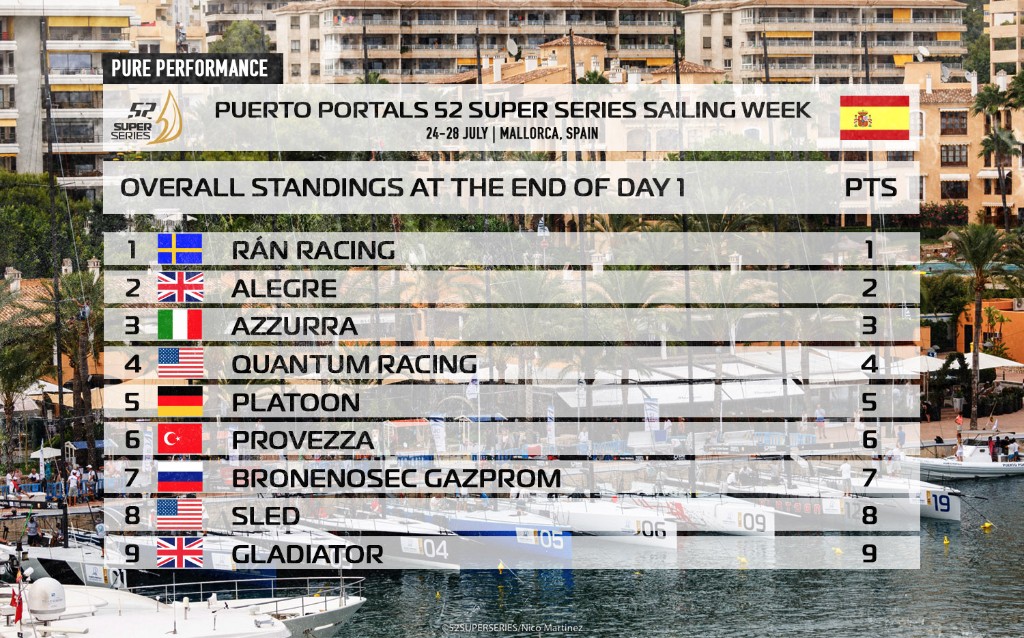 (Monday 24th July, Puerto Portals) – Carrying the momentum of their regatta win in Sardinia to Mallorca and to the Puerto Portals 52 SUPER SERIES Sailing Week, Niklas Zennström and the crew of Rán Racing top the leaderboard after only one race was completed on the first day of competition.

Patience was required. The early postponement while the breeze filled and settled was not too much of a chore for the nine crews as the onshore facilities at Puerto Portals Marina includes a shady sailors lounge a few metres from the line up of TP52s. But the first attempt at Race 1 had to be abandoned when the NW’ly breeze was turned over by some opposing, thermal sea breezing pushing in.

But after a further delay, the gradient breeze rolled back down off the island hills, building rapidly to give a start in 12-14kts of NW’ly and there was a little more wind to come.

Although Zennström nailed the pin end of the start line, coming away with pace to ease away from Platoon, Azzurra and Quantum Racing, it was the right, inshore side of the upwind that paid with a progressive right shift.

Andy Soriano’s Alegre, with Andy Horton calling tactics, did not get the start they wanted and were one of the first onto port. Pressing well to the right, they were rewarded with a small lead at the top, windward turn, just ahead of Rán Racing.

But at the offset mark, Alegre ran slightly wide on the gybe and let Rán Racing inside them. The black-hulled Vrolijk design was quickly accelerating to their sweet spot: downwind conditions, building a decent margin on the chasing pack.

On the second beat, Alegre closed slightly, but Rán Racing’s Ado Stead and Adam Beashel defended down the run to keep their win safe. Soriano’s team finished second with 2015 Puerto Portals winners Azzurra starting their regatta with a third.

Adam Beashel, Rán Racing’s strategist explained, “We liked the breeze on the left because it just seemed to be coming through the valley on that side of the racetrack better than on the right. Luckily for us it all played out as we hoped.”

The crew come to Mallorca buoyed by their victory in the fourth 52 SUPER SERIES regatta of the season.

“It helps, it’s nice to have a win. But as we all know it’s a new regatta, it starts again. It’s just about trying to go out there and sail your own boat as best as you can. That’s a lot of what we did today, and on the second beat we played what we thought would work for us and it did.”

After losing their mast in Sardinia and having a tough month of hard work: stepping their previous mast, getting new rigging made and a new mainsail and jib, and recutting other sails back to match the “old” rig, second place was a nice reward for the Alegre shoreteam.

Andy Horton said, “The amount of tuning and rigging and measuring and reweighing and everything that you have to do, to get it to this point, is incredible. It’s been a month of flat out work for these guys, pieces getting flown in from different countries, the mast was in Valencia, we had to get the boat to the mast, a lot of things had to go perfectly to get us to where we are.”

Emirates Team New Zealand’s Ray Davies, partnered by Tomasso Chieffi on Bronenosec ended up on the wrong side of the shift up the first beat and were on the back foot from the first turn, but they took a couple of places down the last run, salving their frayed nerves slightly, considering they were the team with a lead of over 100-metres when the first race attempt was canned.

“The level obviously stepped up a lot. One thing that’s changed is that the teams are matching up with each other and getting set up before the starts, which has really changed the standard as well, and I think all of the guys are changing crews all the time. So everyone knows how to sail well, the whole level has really risen a lot.” Davies confirmed.

Asked again about where he sees the TP52 monohulls going in the future, he asserted: “This class is really strong. There’s amazing owners that love sailing and I think it’s really important that we get these owners into the Cup as well. We have to make it accessible. And these boats, these teams – they campaign at a pretty high level, it’s not a crazy leap anymore.”