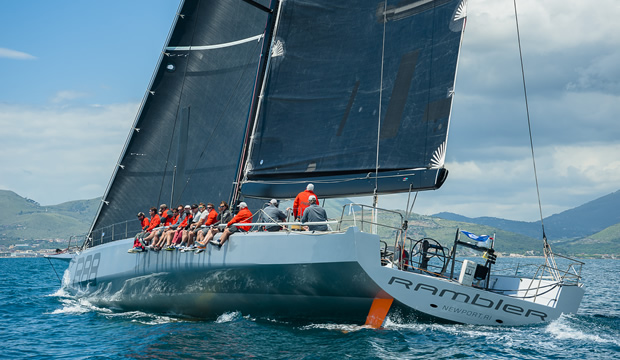 Despite light conditions off Sicily, George David and the crew of his racing maxi Rambler 88 succeeded in not only demolishing the record for this year’s Volcano Race, but also won line honours and the overall prize based on corrected time: The coveted ‘triple crown’.

Organised by the International Maxi Association in conjunction with the Yacht Club Gaeta and hosted by the Base Nautica Flavio Gioia, the Volcano Race has an exceptional course: South down the west coast of Italy, from Gaeta, across the Tyrrhenian Sea. It then leaves to port the Aeolian Islands – Alicudi, Vulcano itself and finally Stromboli, one of Europe’s few active volcanos – to the northeast of Sicily before returning, past the Sorrento peninsula, Capri and Naples, to Gaeta. The event is the second of four events in the IMA’s inaugural Mediterranean Maxi Offshore Challenge.

For this sixth edition of the Volcano Race, the Maxis sailed a 398 mile course. Setting off on Wednesday, Rambler 88 finished at 03:25:18 CET Friday in a time of 1 day, 14 hours and 20 minutes. This beat the previous record set in 2015 by Igor Simčič’s 100ft European-flagged maxi Esimit Europa 2 by a massive six hours and 42 minutes.

Rambler 88’s record time came as a shock as a zone of high pressure had been long forecast as lying over the Aeolian Islands, with conditions expected to turn wind-less in this area. George David explained: “I am surprised because the conditions were supposed to be light around the race course, but we averaged 10 knots. Normally we would say that we wouldn’t go so well [when it’s light], so we made a special effort to lighten the boat. The problem is that we have a lot of wetted surface at the back end because the boat is so wide. But we kept going pretty well – I was quite surprised. Part of it may have been down south [when we kept moving] due to some wind shear and some wind aloft.”

While the Volcano Race is renowned for proving crews with the opportunity to see ‘Mother Nature’s fireworks display’ around the Aeolian Islands, this year the excitement overhead continued as Rambler 88 encountered an intense lightning storm. As David recounted: “It was pretty exciting between Capri and Ischia with thunder and lightning as the front came through and the breeze built to 25 knots.”

Second home in two days, one hour and 32 minutes was Wild Joe, of Marton Jozsa, while on the Hungarian Mini Maxi’s heels was Carlo Puri Negri's Atalanta II, freshly returned to the water this season after an extensive ‘restyling’ by Felci Yacht Design.

“It was a big beat,” explained Atalanta II helmsman, Gabriele Benussi, of their Volcano Race. “I'd say three quarters of the race were upwind in winds varying from six to 18 knots. After Capri the wind went through 180°, which allowed us to close on Wild Joe, but she still finished half an hour ahead of us. It was good race, with beautiful scenery, a close-knit crew on board, including some veterans of Atalanta.”

The welcome home for Fra Diavolo, the Mylius 60 of Vincenzo Addessi, President of the Yacht Club Gaeta, didn’t come until 20:41 CET on 20 May. “Off the Aeolian Islands we saw dolphins, whales and sea turtles,” recounted Addessi. “And the weather…we experienced everything – squalls and calms, lightning storms and hours of pleasant spring breeze.”

Cian confided: “Our race was above expectation. Recently we made some improvements to Shirlaf. Our problem in this race was our timing, reaching key points of the race course, like Alicudi, before the wind shifted and then disappeared. We lost contact at Volcano, but en route to Capri we were doing well again.”

Sadly after making 9 knots up the course, the wind shifted again and they found themselves having to beat back to Gaeta. “Our crew was perfect, made zero errors, and all the sail changes were precise,” concluded Cian.

For the first time this year, in addition to the Maxi entries, smaller boats with an IRC rating down to 1.102 were allowed to compete in the Volcano Race. They sailed a shorter course of 329 miles, rounding Stromboli and Strombolicchio. The IRC was won by Eddie de Villiers’s Welbourn 46 Hi-Fidelity.

George David enthused about the race: “It is early in the season so a great time of year and a beautiful race course. We have been around it several times in the Rolex Middle Sea Race and it just seemed even better rounding Volcano, Alicudi and Stromboli, which is such a distinctive island. It is just a great place to race. And Gaeta is a great little town. It is highly recommended –a great place. So we can declare the race a success. There was a good fleet, a mix of boats, good conditions and great scenery. I’ve had a great time here.”