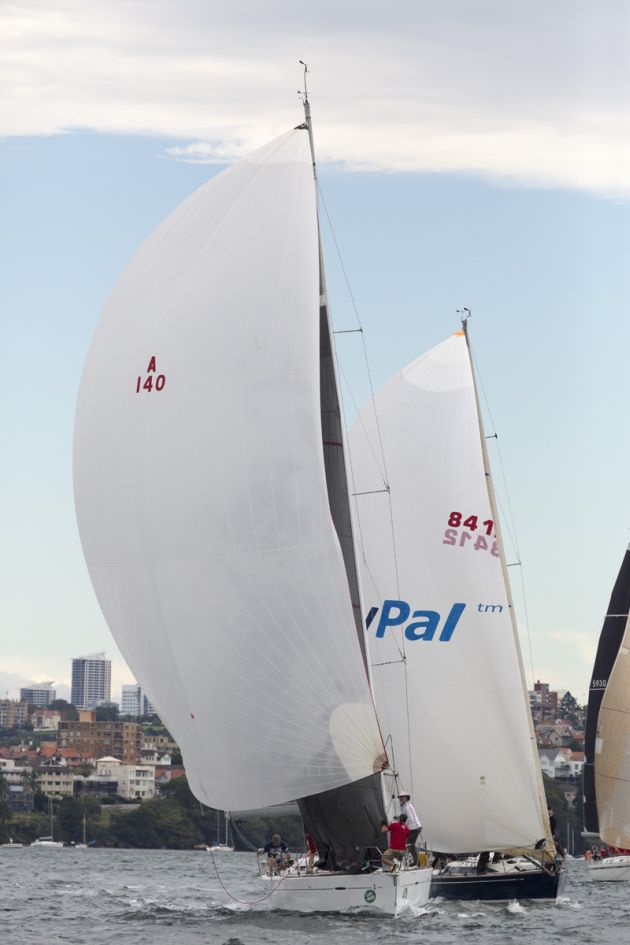 Ariel - pumped for the season ahead. Photo credit David Brogan

Most sailors love a good breeze, but it has been as rare as hens’ teeth in the Land Rover Winter Series, and Sunday’s Race 4 was no different, when 130 yachts filled a warm and sunny Sydney Harbour but found the going anything but easy.

And while the breeze was light and shifty, causing spinnakers to billow and some yachts to lose ground in a light 8-10 knot breeze, described by Division J1 winner Steve Hatch (M) as “all over the shop”, nobody has complained about the beautiful spring-like conditions that continue to pervade Sydney during the Cruising Yacht Club of Australia hosted series.

Conditions forced Principal Race Officer, Steve Kidson, to postpone the start. Then the fleet was further detained when two boats accidentally picked up mark lines, so Kidson looked at the big picture and shortened the course to one lap for all divisions.

Division A2 winner, Tony Kirby, undertaking skipper duties on Never a Dull Moment in the absence of her owners Col and Denise Wilson, confirmed trying to stay in clear breeze was the objective.

“It was very smoky on the Harbour to start with, because of the burn-offs and we did the reverse of Course B, and started in a breeze that was from the east/south-east. It quickly went to north-east. Throughout the day it was around 8-10 knots and with the tide coming in around 2.30pm, it brought the top end of breeze with it,” Kirby said.

Ron Forster and Phil Damp have made a successful return to the race track in the Land Rover Winter Series, sailing their Beneteau First 40 to a win in Division B after an exciting battle with two perfectly named rivals, Arch Rival and Outlaw, respectively owned by Steve Connors and the father and son duo of Alan and Tom Quick.

Forster said afterwards, “It was a wonderful sail and a great tussle between the top three. I think what did it for us was gybing to avoid South Head. There was definitely more pressure on the western side of the Harbour.

“Ariel usually doesn’t do that well in light weather – it was a wonderful race. The series is great for sail and crew testing,” said Forster who confirmed he, Damp and crew are limbering up for the 2016 Rolex Sydney Hobart, having missed the last one.

“The race officers did an excellent job starting us a bit late and sending us on the course they did – they did the right thing and we appreciate it,” he ended.

Division J2 winner, Steve Hatch said he had a strategy in place. “The only way to do well was to stay in clear air, which we managed much better than we did two weeks ago when we got hemmed in by others.”

Hatch, at the helm of his Sydney 38CR, ‘M’ (named for his wife Michelle), overcame both Libertine (Ben Morgan) and last week’s winner, Hanni (Mike Hesse) to claim the honours.

He said, “You couldn’t lay the start line on starboard tack. Occasional Course Language 2 (from Division A2) started a minute in front of us, but by the time they tacked back after the start, we were in front of them. That’s the sort of day it was.

“You had to spot the pressure and shifts and step out. We could see pressure coming out of Rose Bay, and we took advantage and stayed clear for much of the race,” the racing rules expert ended.

Due to problems with the scoring system last weekend, and with the Land Rover experience back in play, divisional winners from Races 3 and 4 were pooled and drawn for the Land Rover Experience and Noakes prizes.

Skeeter (Sandor Tornai) and Never a Dull Moment (Col and Denise Wilson) were drawn to receive the use of a Land Rover Evoque for one week at the conclusion of the Series, while the two Noakes winners were Cloud IX (Andrew Waugh) and Ariel (Ron Forster).

Each week, one lucky division winner will be drawn to receive a Land Rover Range Rover Evoque experience for a week, while a second lucky winner will receive a lift stand launch and two free lay days donated by the Noakes Group.

Results are provisional with protests being lodged in Divisions A1 and B.

Race 4 of the Land Rover Winter Series will be held on Sunday, with the Sydney 38 division first off the blocks at 11.25am.