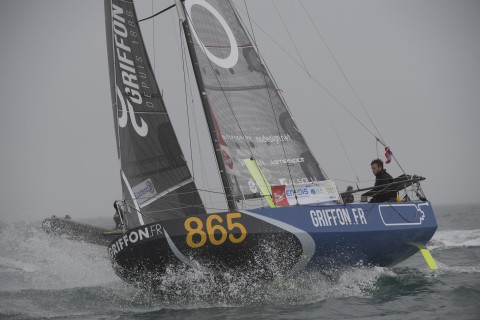 The weather played a sly hand this Sunday morning in the Bassin des Chalutiers. Indeed, the persistent drizzle and low cloud did little to cheer those Mini sailors feeling the pressure as they cast off. Ultimately though, there was a sense of relief all round that they were finally getting going with their race, a moment they’ve been working towards for the past two years. After a lively start for the first few hours, it promises to be a fine crossing.

As with every Mini-Transat start, the atmosphere is tinged with a mixture of warmth and seriousness on the pontoons and the oppressive grey skies mirror the weight that is on some of their shoulders. On the pontoons, the competitors’ exchanges with their nearest and dearest are muffled. Faced with an entourage of family and friends, the sailors put up a good show, trying to keep things light with the farewells and the sweet nothings… After all, this Atlantic crossing is a dream that has finally become a reality for many.

For all that, the first few miles of this Mini-Transat La Boulangère will be far from restful. With upwind conditions and rough seas with a substantial south-westerly swell, the solo sailors’ stomachs are likely to be finding things tough this evening. The focus right now though will be on getting rid of the stress of the start and gradually getting into a more primitive pace of life combining fragmented sleep and snacking rather than meals at set times… Though some will feel at ease almost immediately, others will need two to three days to adapt.

Cape Finisterre, Justice of the Peace

Current predictions suggest that the upwind conditions should be succeeded by some boisterous downwind sailing as the fleet close on Cape Finisterre, according to Christian Dumard, the weather guru from Great Circle. Essentially, to the south of this headland, the Mini sailors can expect stronger winds in a corridor spanning around a hundred miles offshore of the coast of Galicia and Portugal. As such, the competitors will have to choose between distancing themselves from this corridor, by gaining headway to the west and potentially having to cover extra miles away from the direct route, or hunkering down in a bid to escape the worst of the wind up ahead. However, the solo sailors aren’t there yet. Between now and the north-west tip of Spain, things could play out in a number of ways.

Minis in the mist

It was in a persistent drizzle that the fleet took today’s start in a W to SW’ly wind of 10 to 15 knots. Almost perfect conditions then, save for the zero visibility in the squalls. Quick out of the starting blocks, the group that opted for the right-hand side of the race zone had the edge. In the prototype category, Erwan Le Méné (Rousseau Clôtures) got the better of Ian Lipinski (Griffon.fr) and Arthur Léopold-Léger (Luna).

Among the production boats, it was a fierce battle between the Pogo 3s, with all the favourites sailing neck and neck. With some slight separation to the right-hand side of the race zone, it was finally Clarisse Crémer (TBS) who was first to tack at the gate that marked the end of the coastal course. She was followed by Germain Kerlévéo (Astrolabe Expéditions) and Frédéric Moreau (Petit Auguste et Cie); the latter managing to position his Pogo 2 ahead of the pack of Pogo 3s. Before completing the coastal course, Erwan Le Méné, who’d pushed too far on his beat, had to switch back to the mark, allowing Ian Lipinski to snatch back control.

Three competitors are unfortunately having to make a stopover in La Rochelle to effect repairs. The first to announce his return was Fred Guérin (Les-amis.fun), whose hull was holed in a collision with Elodie Pédron (Manu Poki & les Biotecks), she too retracing her steps. Finally, Gwendal Pibot (Rossinante) announced that he would also be returning to the Port des Minimes after breaking his stay. Obviously, this isn’t the best start to their race, but as was highlighted over the VHF by Tanguy de Lamotte, the skipper of the Imoca60 Initiatives Cœur, who had come along to witness the start, “Making a pitstop is never much fun, but if it has to happen at all then La Rochelle is the least worst option…” There are still over three weeks of racing to go before the finish in Martinique, which means there’s time to make up their lost ground.