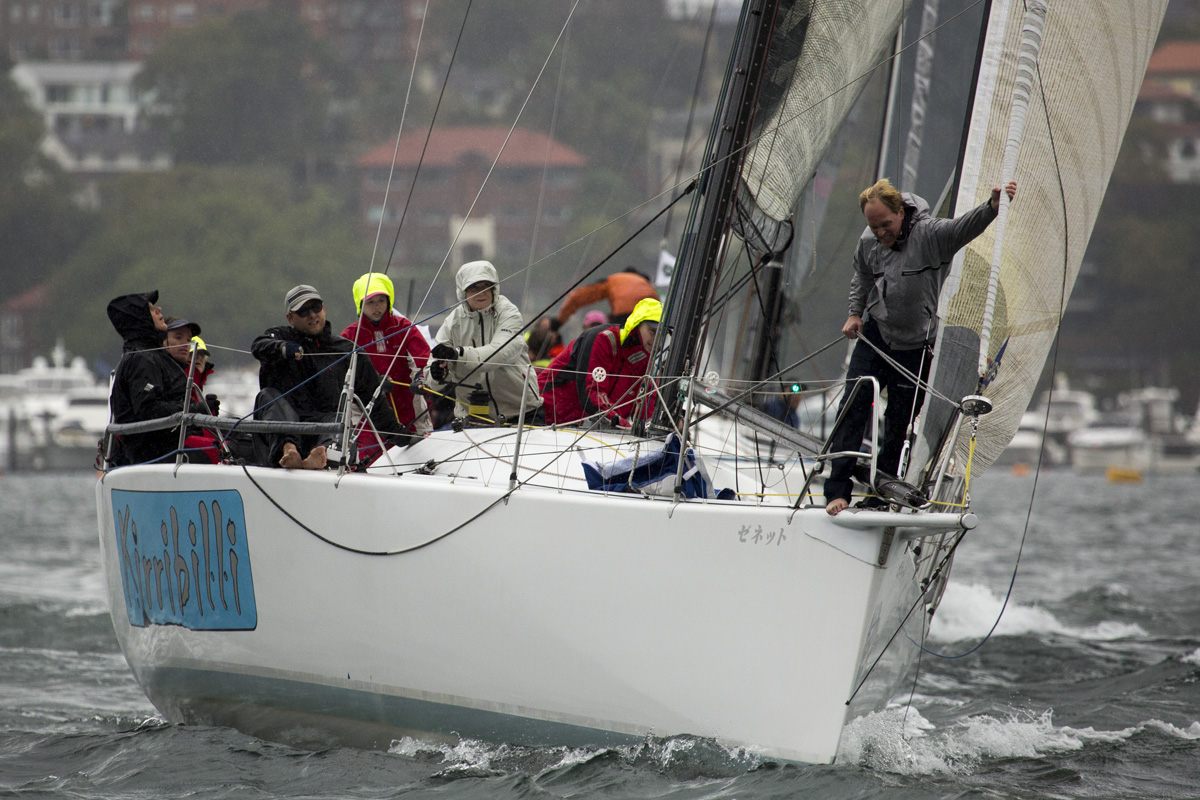 Race 7 of the  of the Land Rover Winter Series on Sydney Harbour was always going to be a wet  one – all day – but it did not dampen the enthusiasm of competitors, instead the reverse was true, on a day when Phil King celebrated his 70th birthday, won his division and was drawn to receive a major prize.

Seems King’s boat is capable of much more than one ‘Last Tango’, as his Salona 44 is named, and he and the crew plan a long celebration after taking out Division B from Cyrene 3 (Michael Selby) and Black Sheep (Derek and Martin Sheppard).

“It’s a fantastic way to celebrate my birthday. My crew worked so hard, despite being hungover. They had to work hard to keep Cyrene and Dirty Mutton (King’s nickname for Black Sheep) at bay and they all collapsed after we finished,” said the yachtsman whose humour is well known around the Club.

“And then to win the Noakes prize (a lift stand launch and two free lay days donated by the Noakes Group) – it capped off the day. We’re having a couple of drinks at the Club to celebrate. I think there will be around 14 people sleeping on the boat tonight.

“Even though not everyone raced today, we’ll take the glory. What’s wrong with them – what’s wet weather gear for? If you’re going to spend all that money on it, you should use it sometime,” said King, who was in high spirits.

The Land Rover prize of the use of a Land Rover Evoque experience for one week was won by today’s Division A2 winner, Kirribilli, Adrian Abbott’s ILC40, which beat Tim Cox’s Minerva by over four minutes, with Bob Steel’s Quest a further 13 seconds adrift in third place.

“Even though it was absolutely bucketing down, we had a great race and result,” Abbott said. “We had a fabulous first upwind leg and nobody got near from there on.

I’ve got a mainly young crew and they’re brilliant. Andrew Chapman, in his twenties, helms the boat and makes all our sails. He’s a top bloke.

“It’s wonderful to win the Land Rover experience. It’s going to Julia MacFarlane who does pit on the boat. She did a brilliant job and she’s good value,” finished Abbott, who could not lavish enough praise on his crew.

Sebastien Bohm steered his Rogers 46, The Goat, to their first win of the Cruising Yacht Club of Australia’s series and the celebrations knew no bounds, according to her co-owner.

“We were in training for the Land Rover Gold Coast race, so we didn’t have an esky on board. It meant celebrating with warm beer, but who cares? We celebrated like we’d won the America’s Cup. We were very happy to win,” he said after defeating Division A1 series leader, UBS Wild Thing (Geoff and Pip Lavis) and Koa, Andy Kearnan and Peter Wrigley’s TP52.

All three yachts, along with other competitors in this series, are entered in the Land Rover Sydney Gold Coast Yacht Race, which starts on Saturday, 30 July.

Although the rain was omnipresent, Bohm said the breeze provided good racing, particularly in Division A1, where they enjoyed a thriller to the end.

“It was fluky with big wind shifts. We had gusts to 15 knots and lulls of 6 knots,” he said of the south-easterly wind that tracked east later in the race.

Dennis Cooper kept the competition in check to win Division D with his Sydney 36CR, Amante. And it was very close, as series leader and last week’s Ladies Day spinnaker Division 2 winner, Alpha Carinae (Damian Barker), was a mere 47 seconds out of the top spot.

Only four points separate Alpha Carinae and Amante, the divisional top two in the series, with Ian Guanaria’s One More-No More also in the mix, two points behind Amante.

“We had a great day, even though we and the boat are saturated. It’s just one of those days,” an obviously happy Dennis Cooper commented.

“The wind was up and down like a yo-yo, so we were lucky we had enough sails on board to make the right selection, especially downwind where we had to keep peeling from asymmetrical to symmetrical. The guys were on top of it and did a good job. We also had enough wind to shake off the competition,” he said.

Richard Williams sailed Calibre to a near two minute win over Phil Herscovics Shine on in the Sydney 38 Division and also won on scratch. However, with three pointscore races remaining, it is John Messenger’s Utopia, skippered by Peter Messenger, that has a massive eight point advantage over Richard Holstein’s Next, with Calibre sitting in fourth overall, but still in contention for a podium place.

Racing in the Land Rover Winter Series continues next Sunday from 11.25am, with the Sydney 38 Division away first on the Sydney Harbour course.