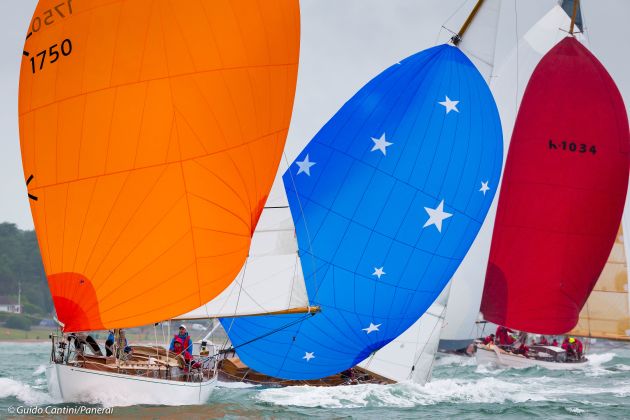 12/07/2017
11 July 2017 – Heavy rain and strong winds were the order of day three at Panerai British Classic Week in Cowes, but nothing can keep a good classic yacht crew down and spirits were high despite the lousy weather. The fleet enjoyed two terrific round the cans Solent races – races three and four of the series – in the blustery conditions.
The stronger breeze suited Simon Payne’s Laurent Giles sloop Damian B perfectly and she showed the rest of Class 4 a clean pair of heels in both races. Richard Matthews started his big boat sailing career in a Kim Holman designed Stella and he is relishing his return to the Stella sailing Scorpio this week. Today he added two second places to his existing pair of wins. Rufus Gilday’s 40sqm Spidsgatter Venya added a pair of thirds to her score card and John Mulcahy’s Stella Estrella took a pair of fourths. Overall Scorpio leads Class 4 by two points from Damian B with Venya in third.
This is the first year Simon has raced Damian B in the regatta seriously so was thrilled to win two races. “Today was a little damp, but we had two fabulous races. We’re very pleased to do so well. Great fun, the Solent at its best, English weather at its worst. It was a little intense sometimes, a lot of tide at the start. The short courses put a lot of emphasis on boat handling, but we had a great time, and it’s getting even better still with this Guinness!”
Irvine Laidlaw’s Spirit 52 Oui Spirit continued to dominate the Modern Classics of Class 1 with two further victories. Sean McMillan, designer and builder of the Spirit yachts, was both delighted to see Oui Spirit doing so well and somewhat disgruntled as she beat his own Spirit 52 Flight of Ufford into second place twice. In race three third place went to Michael Hough’s Spirit 65 Chloe Giselle and in race four David Grylls’ Spirit 46 Helen of Durgan took third. Oui Fling now has a two-point lead over Flight of Ufford with Helen of Durgan three further points behind in third in the overall standing for Class 1.
Giovanni Belgrano’s Laurent Giles Sloop is on top form in Class 2 and has taken straight wins in all four races to date. In race three Brian Smullen’s McGruer ketch Cuilan finished second with Bojar, the Johans Anker designed Bermudan cutter owned by Andrew Pearson, third. In race four Bojar took second with Gildas Rostain’s Olin Stephens’ One Tonner Volonte third. Whooper’s nine point overall lead in this class puts her in a very comfortable position at the mid-point in the regatta. Volonte lies second, eight points ahead of Bojar.
Class 3 saw some incredibly close racing. In race three Michael Brigg’s beautiful Fife Mikado took first place. Scot Yeates Stiletto, whose design brief to Kim Holman was “standing room for a bottle of Gordons”, took second just 37 seconds behind Mikado, and Jonathan and Scilla Dyke’s Robert Clark 10 Tonner Cereste came third. Race four was won by Cereste with Tim Yetman’s 1924 West Solent One Design Suvretta second and Barney Sanderman’s 1949 Sparkman & Stephen’s yawl Laughing Gull third. Cereste is now leading the class overall by three points. Mikado and Suvretta are both on 17 points with Mikado currently taking second on count back.
After racing Jonathan Dyke was sanguine about the weather. “It was good, this morning was pretty lively, the rain came in and the wind came in and the visibility came down. We had great courses again from the Squadron and really exciting races, fairly lively upwind and some great downwind legs as well. A lot of fun.”
With gusts up to 25 knots, a number of the Metre boats decided that conditions were too fierce for their beautiful classics and some impromptu lunch plans were made instead. 8 Metres Saskia, Athena and Helen did come out and start race three, but Helen was declared OCS, which left Murdock McKillop’s Saskia to romp home for a win just over four minutes ahead of Athena. Saskia now leads the 8s overall, four points ahead of Helen with Athena one further point behind in third.
It was a two horse race for the 6 Metres with Fenton Burgin’s Sioma and Tom Richardson’s Thistle match racing their way around both courses. In race three Sioma was the victor, while race four went to Thistle. Overall Thistle and Sioma are both on 11 points with Sioma leading the regatta on countback. Mena is seven points behind them in third overall.
Après sail, the crews gathered in the Panerai Lounge to enjoy the fabulous hospitality of the event sponsor and honour the daily prize winners. Unfortunately, the scheduled Open Yachts Pontoon Party, sponsored by Spirit Yachts and Classic Boat, had to be postponed until Thursday due to the inclement weather.
Full results and further information about Panerai British Classic Week can be found on the regatta website http://www.britishclassicyachtclub.org/regatta/index.html.