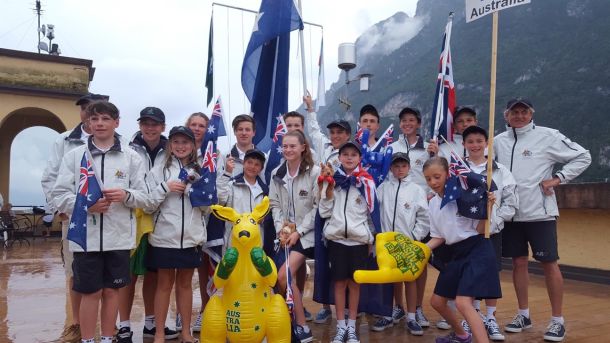 The Australian Cadet team in Italy.

Well the first official day of the regatta is over and now competition starts.

Unfortunately the weather put a bit of a dampener on the day as is often the case with these things. Consistent rain and no wind saw the AP flag flown early and competitors were kept ashore to amuse themselves for several hours. It gave me a chance to get the skippers together and go through the Sailing Instructions, always a good idea to have a comprehensive knowledge of these.

After a few hours some wind filled in and we launched to begin the Invitational Race. It got underway in a very fickle breeze and was abandoned 10 minutes into the race. It gave the race committee a chance to test their routines and procedures which is an important part of this race.

Back to the shore and the rain settled in for the opening ceremony. The rain meant the march and flag raising were put aside and a welcome ceremony was held on the undercover terrace.

The weather may have dampened proceedings but certainly not the enthusiasm of the kids, each team was cheered when announced with the largest (Great Britain) getting the biggest roar. It was only matched by that for the single boat Ukraine team by other competitors, bravo sailors.

The Aussies were quiet and unassuming in their display, yeah right!

Anyway onto today with competition starting, early days and it is an old adage but very true, you can't win a regatta on first day but you can lose it.

Many thanks for support