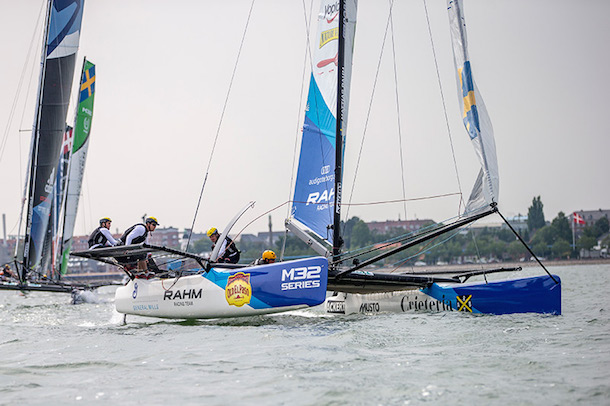 Rahm Racing won the M32 Series Scandinavia 2013. Today they proved that they once again belong in the top of the fleet. Photo M32 Media.

In excellent conditions the M32 Series Copenhagen continued with an easterly breeze coming from the land of Sweden. Rahm Racing performed at their top level all day and after a slow start in the previous events they now had their best day so far in the Scandinavian Series. With three wins out of six races they really showed everyone in Tuborg Havn that they are back in the game. “When you have a day like this it´s very easy to sail. We managed to get some good starts and that gave us a lot of confidence. The team was really pushing hard and we are now obviously aiming at winning the event here in Copenhagen”, says Mattias Rahm, skipper on Rahm Racing.

Essiq Racing with skipper Nicklas Dackhammar was pushed down from the top today and filled the board with penalties and false starts. “We were on the wrong spot at all times. Some days are like this”, says a disappointed skipper.

Hydra Sailing Team got their first win today and that means that all of the teams participating in the event have won at least one race. “The lighter breeze this Saturday was in our favour and we thank the wind gods for that”, skipper Michael Hestbaek figures.

Race Director, Mattias Dahlstrom, also decided to perform a Match Race out of competition. This was a test since next year the M32 catamarans are going to be used in the World Match Racing Tour. Rahm Racing took on Trifork with Jes-Gram Hansen as a skipper and Mattias Rahm and his crew crossed the finish line first in front of a cheering crowd. “If every Match Race in the World Match Racing Tour next year can be as exciting as this, it´s going to be a huge success”, concludes Mattias Rahm.

Sunday is the last day of racing.