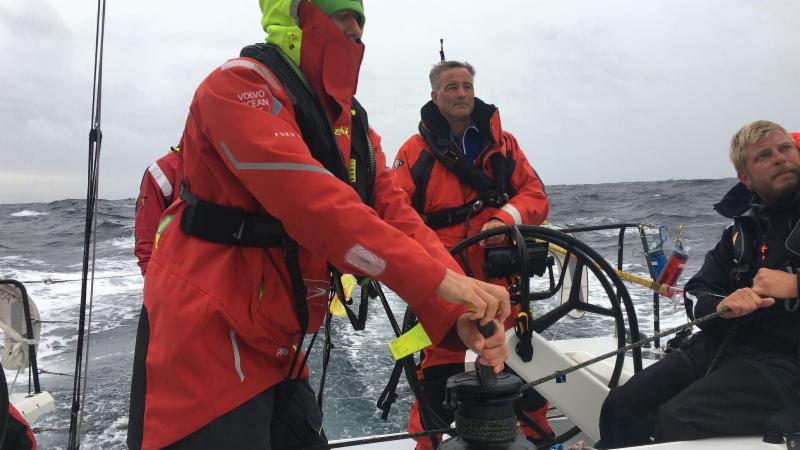 Tough conditions have continued for the fleet racing in the Sevenstar Round Britain and Ireland Race, with competitors reporting 30 knots of wind gusting to 35, with 3-4 metre waves in a confused sea state.

As the front runners reach the halfway point, the battle for line honours is raging north of the Outer Hebrides. Class40 Concise 8 skippered by Jack Trigger moved up to second place yesterday and briefly took pole position during the night. However, Phil Sharp's Imerys Clean Energy fought back to regain the lead as the team passed the remote island of Sula Sgeir. Nicolas Troussel's Corum is less than a mile behind Concise 8. Giles Redpath's Pata Negra is still the provisional overall leader after IRC time correction, but Ben Schwartz and Chen Jin Hao's Figaro 2 Velosolex has closed the gap.

After taking a substantial lead for line honours and the Class40 division, Imerys Clean Energy blew out their spinnaker yesterday afternoon, as Phil Sharp explains: “Approaching the cold front the wind was building so we made the decision to change the spinnaker to the smaller Code 5. Just as we all went on deck the boat buried its bow in a wave and the front of the spinnaker tore off completely, which is a massive disappointment. The boat turned into a sail loft; I am confident that it will hold, you just never really can be 100% sure. There is quite a lot of wind at the moment so we are not suffering too much. Judging by the speeds of Corum, I think their spinnaker also broke.”

Concise 8 has the youngest crew in the race, the team of four led by Jack Trigger, are all 23-25 years old. Ollie Mellor racing on board contacted the media team last night:

“Awesome conditions, full on! We have a reef in and the A5 up and on deck it is as wet as hell, and not much drier below, but we are just loving it! We have seen over 20 knots of boat speed off some big waves. Time to get two hours rest before we put another reef in before the gybe. We want that lead.”

The overall winner of the Sevenstar Round Britain and Ireland Race is calculated using the IRC rating system. The provisional leader close to half way through the race is Giles Redpath's Lombard 46 Pata Negra, which is one of the largest boats competing. They reported over 20 knots of boat speed yesterday. The smallest yacht in the race, in second place overall and leading IRC Two-Handed division, is from France and China – Ben Schwartz and Chen Jin Hao's Figaro 2 El Velosolex Sl Energies Group.

“This is a hell of a ride!” exclaimed Ben Schwartz. “Top boat speed 19 knots, but we have taken the kite down for now with the wind 30 knots gusting 35 and 3-4 metre waves. The keel fin is singing at over 12 knots of boat speed; it is a good noise to hear!”

Ian Hoddle's Sun Fast 3600 Game on (Virgin Media Business) is currently third overall and leading IRC 3. Ollie Wyatt racing Two-Handed with
Ian contacted the media team last night:”It has been a very challenging start to the race. I struggled with sea-sickness during the first few days and Ian did a cracking job of keeping us going. We had a great sail around the West Coast of Ireland with full main and A4 up, screaming along in 25 knots of breeze. The wind started to go forward as we approached Black Rock and we are reefed with a full jib. We are positive and will keep pushing on.”
GameOn

In IRC 4, Charles Emmett and Tim Winsey's Sigma 36 British Beagle have rounded Tearaght Island, leading the class by 50 miles on the water and after IRC time correction. Chris Staples's Sigma 36 Tantrum of Langstone rounded the Fastnet Rock in the early hours of this morning and finally cracked sheets.

“The Tantrum crew is looking forward to a cooked breakfast at the crew change. We have been battling through Force 5 with gusts up to 27 knots. This is the first day since the Solent that we've been able to have more than a kettle on the stove,” reported Roxy Maynard from on board Tantrum of Langstone.

Marc Dubos Class40 Esprit Scout has officially retired from the race, crew are safe and well. Charlene Howard's American Sun Odyssey 45.2 AJ Wanderlust has an electrical problem and is undertaking repairs in Cork.
The Sevenstar Round Britain and Ireland Race is closely followed throughout by the Sevenstar team, many of whom are passionate sailors themselves. They are in awe of the close racing and the endurance shown by the teams.

“With the UK Met Office having issued strong wind and gale warnings for the top of the race course, no doubt the competitors are looking forward to fast sailing conditions, but will keep good seamanship a priority. As a shipping company we feel strongly connected to the sailors on the yachts; respect for the elements and the safety of our vessels and crew are part of our DNA. To finish first, first you need to finish, is a well-known expression that seems appropriate for the forecast conditions and we will keep glued to the race tracker and social media to follow their progress,” commented Richard Klabbers, Managing Director Sevenstar.