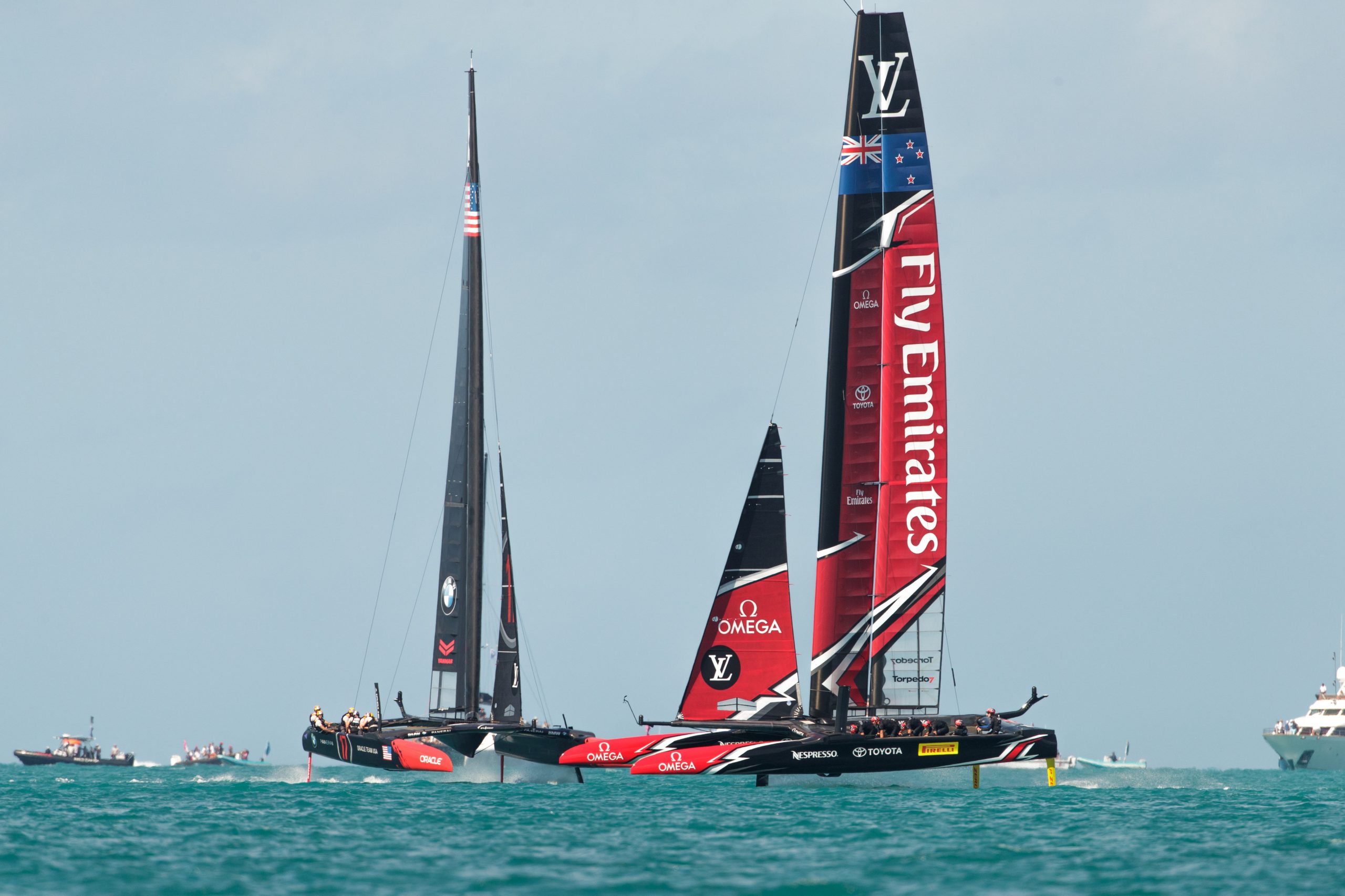 It was the first race for the new look kiwi team racing on sailings greatest stage, and managed to beat the French team with the composure expected of America’s Cup veterans.

Skipper Glenn Ashby was the only crew left on board from San Francisco, for the rest of the crew it is their first America’s Cup campaign and test of real America’s Cup action.

Helmsman Peter Burling had the race under control from the pre start, entering on starboard and waiting for his chance to pounce, coming up under the French with 35 seconds to go. It forced the French to tack away, putting Emirates Team New Zealand in the box seat for the start leading the French off the start line and racing away towards the first mark at over 40 knots.

Emirates Team New Zealand extended all of the way around the race course eventually crossing the finish line 2 minutes 33 seconds over the French team.

“Great to get the first race under the belt, I’m sure all the guys having their first one are happy to put it to bed.” said skipper Glenn Ashby with an air of relief to have got the first point on the board in the Louis Vuitton America’s Cup Qualifiers.

“We haven’t done a huge amount of yachting these last couple of weeks, or racing against other boats so it’s definitely a learning experience every time we go out there and our learning curve is going to be pretty steep.”

The second race of the day was the most anticipated match and a rematch of the 34th America’s Cup final: Emirates Team New Zealand against Oracle Team USA.

Oracle Team USA were late entering while Emirates Team New Zealand sailed right down to the pin end the lay line hitting the start gun slightly down speed up allowing Oracle Team USA to get their nose ahead rounding the first mark.

Oracle Team USA lead into mark 2 with Peter Burling rounding right on the transom of the American boat, sailing towards the right hand lay line on the hip of Oracle eventually tacking away causing enough of a split to hook onto a wind shift on the right hand side and eventually cross ahead and take the lead on port tack and rounding the third mark 20 seconds ahead of Oracle Team USA.

Oracle Team USA rounded the forth mark precisely 20 seconds behind again, both teams pushing their boats in scenes reminiscent of San Francisco 4 years ago.

In a reversal of the first upwind leg Oracle Team USA made huge gains on a wind shift after splitting with the kiwis to merge at the top mark with a protest from Oracle team USA, which was disallowed by the umpires but allowed them to round just ahead of the Kiwis, and pulling away downwind but only rounding 3 seconds ahead of Emirates Team New Zealand at the bottom mark.

It was eventually enough to take the point from the kiwis by only 6 seconds across the line, but a race which the rookie team can take great heart from.

“It was a great battle in the last race, to go up against Oracle in the second race, it is who you are going to have to beat if we are to win this thing.” said Helmsman Peter Burling.

“We are happy with how we checked in, the boat was going fast our manoeuvres were going well, but we missed a few shifts up that last beat and probably made the wrong call at the top mark to let them slip through. But we feel we are right in the mix and we have plenty left in the tank from here.”