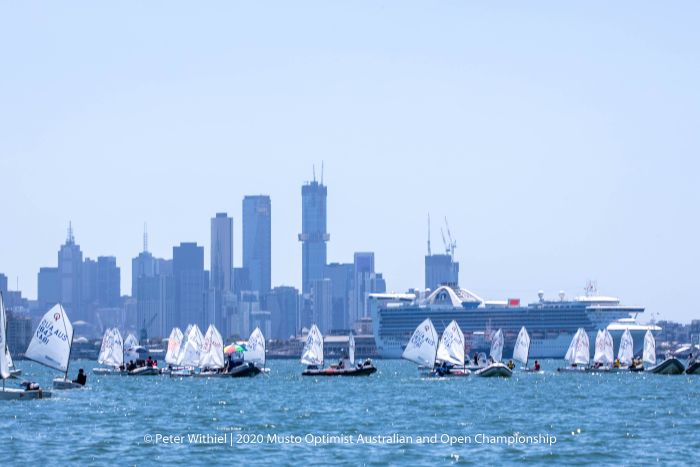 The event took place with the beautiful Melbourne skyline as the backdrop. Photo Peter Withial.

The 2020 Musto Optimist Australian and Open Championships kicked off at the Royal Yacht Club of Victoria today with 223 of the best junior sailors descending on the club to compete from 2-9 January 2020.

The Royal Yacht Club of Victoria, one of the country's oldest yacht clubs, has pulled out all the stops for this year’s event, opening up their doors and facilities for sailors, supporters and coaches.

The yacht club, located in the top of Port Phillip Bay, has picturesque views of the Melbourne skyline and the busy Melbourne shipping port. The large rigging area and lawns provide plenty of space for sailors to socialise, hang out and catch up with mates.

With a light southerly breeze filling in and beautiful blue skies the Optimist sailors launched from the club for the Teams Racing National Championships.

“The teams racing is a great aspect of Optimist sailing, the kids love it, it's good fun, it teaches them good skills as far as rules and tactical stuff goes on the race course,” Australian Optimist team coach Grant Alderson said.

Sailors were grouped into teams of four and competed in a knockout tournament with racing held adjacent to the main clubhouse docks providing an excellent viewing area for supporters and families.

This unique element to the Optimist class provides sailors with a fun, tactical and social element to the event that everyone loves and it is fantastic to see the sailors sail hard on the water, but also spend time with their mates between races and after racing.

The “Vic Top Guns” team of Matty Goss, Aidan Simmons, Riley Cantwell and Phillip Cripsey sailed extremely well to take out the Teams Racing title for the second year in a row.

“We had the teams racing today, with lots of conditions starting off really light and then becoming gusty in the middle,” Vic Top Guns sailor Matty Goss said. “It eased off to normal in the afternoon and then our team was lucky enough to come away with first place.”

Tomorrow morning kicks off with measurement and registration followed by the invitational race that will see three fleets meet for the first time.

Conditions are looking hot, but hopefully the weather gods can deliver a nice southerly sea breeze to get racing underway for the 2020 Musto Optimist Australian Championships.

Once racing has been completed, the festivities will commence with the official Opening Ceremony and Musto Teams Racing National Championships presentation. There will be an onsite DJ and it will be a great opportunity for friends and family to socialise.