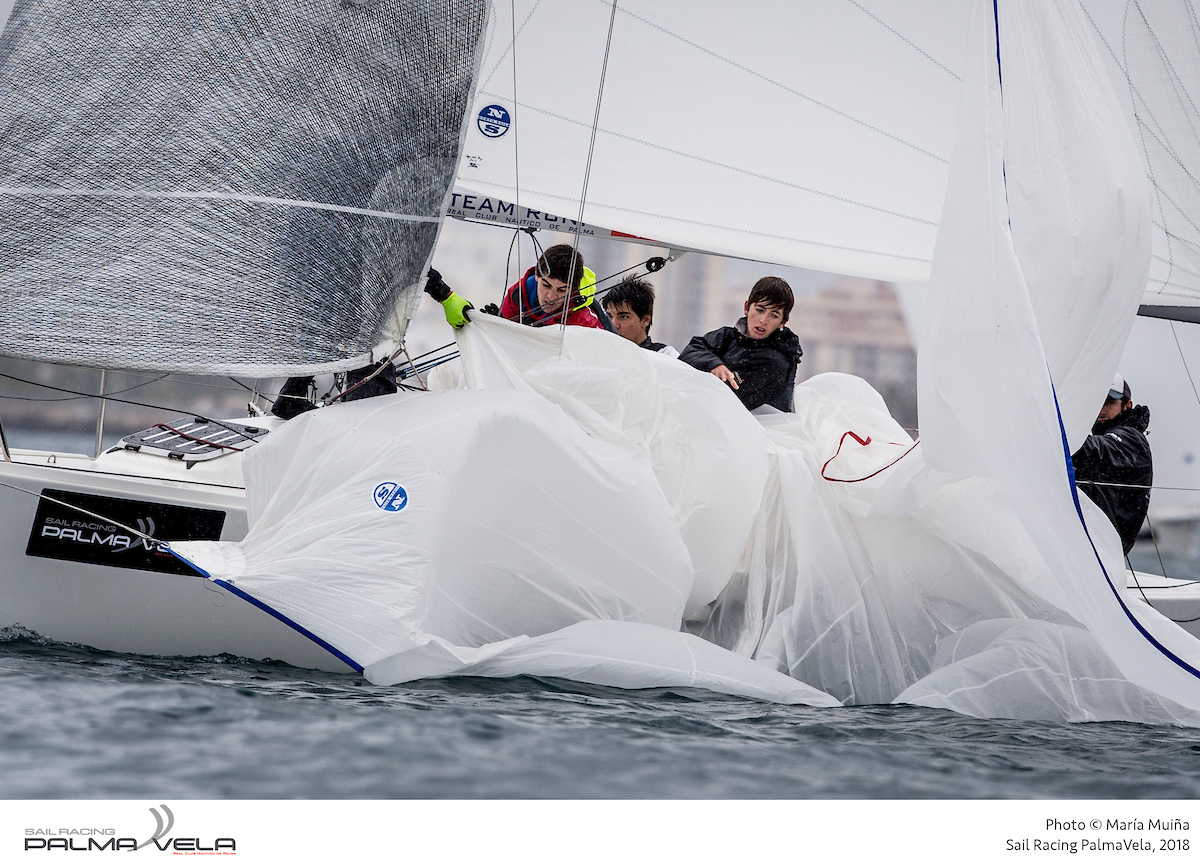 Azzurra consolidated her lead in the very hot TP52 class thanks to a first and third from the two windward leeward contests sailed today on a grey Bay of Palma.

The top three boats emerging at this curtain raising early season event are very much the ‘usual suspects’, Azzurra leading Quantum Racing and world champions Platoon in third after two days of racing.

Season title holder, Azzurra, is six points clear, but behind her there are just four points between second and fifth places, Hasso Plattner’s Phoenix, with Ed Baird as tactician, is second.

“Azzurra is strong, but Quantum Racing is a bit hit or miss, because the crew have barely got into their boat and so are learning, but these are solid teams. It will be an interesting season because the gaps between these ‘best’ teams are getting smaller and smaller all the time. They’re shrinking fast,” commented Sled’s coach, Rod Davis.

Azzurra came from behind on the last run to win a photo finish with Quantum Racing. In the second race, it was Harm Muller Spreer’s Platoon which won ahead of Quantum Racing, making good gains down the final run.

“It was a bit like the Solent out there,” said Guillermo Parada, the Azzurra skipper-helm. “We sailed two tidy races today. We lost a position in the second race and gained a position in the first race. So for the day, we are even.

“Slowly we’re getting the communication and gelling with Santi (Lange). Overall it’s been a positive day, considering the conditions. You had to stay in phase with the big changes in the wind direction and the wind strength.

“Santi did a good job of being patient, waiting for the good moments to tack or gybe for the next shift or puff. We were relatively quick which is a good situation looking forwards for the season. We are learning, coming back to the dock having learned something which is good.”

After five races there is just one point separating four of the five Melges 40s racing. Richard Goransson’s Inga is still holding the slenderest of leads on 9 points. Yukiro Ishida’s Sikon, winner of the final regatta last season, took the gun in the first race, while the Russian flagged Dynamiq-Synergy Sailing Team won the second race to move up to second overall on that tie break.

The Russian’s Italian tactician, Michele Ivaldi, reported: “It is great racing with the five boats all at the same level. We can expect different results in every race.

“Today in the shifty winds the field was levelled up. It was vital today to play the shifts well and to go fast downwind. We had a couple of very good runs in 22 knots and were doing 18 to 19 knots, which was great.

“Yesterday Inga was standing out, but today everybody was very even, all the boats really were the same today.”

With Denmark’s Palma based three time Olympic medallist, Jesper Bank, calling tactics it was the German flagged Niramo which stayed clear of the pack in a complicated, challenging coastal race for the ClubSwan 50s. They lead around the course which was shortened to 14nms due to the shifting breeze which frustrated some of the tacticians and afterguards.

Cameron Dunn, tactician on Onegroup which lies third overall, recalled, “It was a bit of a crazy race. It was not really what you would call normal yacht racing. I think we had five 180 degree wind shifts.

“We did a nice first 2.5 mile beat, and then up to Illetas, which was right under the hills, so it was changing all the time. I think it changed two or three times every leg.

“But to be fair, Niramo managed to lead the whole way around. They did a really nice job getting away. They were just better. We were passed by boats that were a mile behind us sailing through to leeward.”

Dunn concludes, “The class is awesome though. The boats seem really even. That is what you want. The racing is even, the boats are cool. I am so happy. The rest of the year looks great though, maybe up to 16 boats at the worlds. It’s going to be great.”

Saturday, the third day of racing, sees the entire fleet complete at 130 boats from 26 different countries when the Hanse 303s join the action.