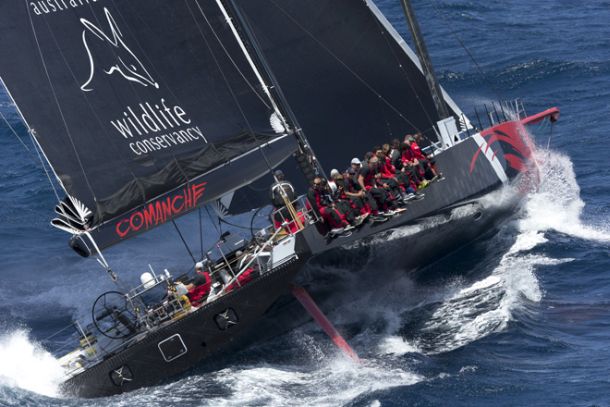 Right here, right now. This is it. Seventy teams have finished practice and final preparations for Les Voiles de St. Barth and will start racing tomorrow (Tuesday, April 13th) in what promises to be this year's most provocative regatta in the Caribbean, if not the entire yacht racing world.

Headlining as a first-time matchup between the marine industry's newest break-through speed creations are Comanche and Rambler. A balance of eight other Maxis between 63 and 90 feet in length with highly recognizable names such as Bella Mente, Lucky, Odin, Lupa of London, Selene and Aragon makes this the most formidable Maxi Division that has shown up here since the regatta's inception six years ago. Extremely tight competition also will be found in five Spinnaker Division classes as well as in classes for Racing Multihull, Non-Spinnaker and Melges 24 one-designs. Forerunners in these classes will no doubt distinguish themselves before the Lay Day on Thursday (April 16), if not sooner. (The second half of racing for Les Voiles de St. Barth resumes on Friday and Saturday, April 17th and 18th, for a total of four racing days.)

Comanche and Rambler will sail in the Maxi 1 class with Bella Mente and Lucky but will start on the same line as the other Maxis, which will be sailing in Maxi 2 class. Scores will be tallied separately for each class; however, a combined score for all Maxi Division entries at the regatta's conclusion will determine the winner of the Richard Mille Caliber RM 60-01 Regatta watch. (Richard Mille is the principal sponsor of the event.)

The two Maxi classes and five Spinnaker classes are sailing under the CSA rating, as defined by the Caribbean Sailing Association, and have been split into their classes according to rating bands. “We have defined the classes with a true sense of equity,” said Les Voiles' General Commissioner Luc Poupon. “The idea is to create groups that are as homogeneous as possible so that the battle on the waves is as tight and exciting as possible.”

As for how that rating will play out in the Rambler vs. Comanche battle, no one yet knows, but all are curious. Optimizing for ratings was not a priority in the design or building of either boat, as both were conceived for straight-line speed, specifically to break distance records. (Rambler, at 88 feet, is 12 feet shorter than Comanche.)

“We're not here for rating honors,” said Comanche's helmsman Ken Read. “Our goal is to be first to finish (over the line), and clearly it will be a lot of fun lining up against Rambler, a very similar boat, for the first time. They'd like to beat us boat-for-boat, and we'd like to beat them boat-for-boat, so I think the sailing world is excited to see this. We're excited to see this.”

For any of the 27 different course choices with distances ranging from 10 to 42 miles, the start and finish lines will be set near Pain de Sucre and Gouverneur Beach, on the southwest side of the island. Something new this year for the smaller boats: two inflatable buoys in the colors of Richard Mille—the first in the bay of Saint Jean and the second in front of Gouverneur—will be placed so that the public can see the boats sail closer to the shore. Also new, the Race Committee has planned for one day, weather depending, to start the fastest big boats on course number 27 (a loop between St. Barth and the island of Tintamarre, to the east of Saint Martin) in order to give all reaching-optimized boats an opportunity to show their speed and establish a speed record for Les Voiles de St. Barth.

“We have to race the courses as fast as we possibly can, and they (Comanche andRambler) will be great gauges for what is happening in front of us with the wind,” said Terry Hutchinson, who will serve as Bella Mente's tactician in the Maxi 2 class. “We have to be smart in the pre-start, because they can have a pretty big impact to our race early on. Once they're out in front and away from us, then it's simply a matter of sailing the boat as well as we possibly can and executing the sail handling maneuvers as well as we possibly can, because things happen very quickly on this course. I think this plays into our favor, because Comanche and Rambler are just going faster all the time, so everything is very condensed for them. If we have ten minutes on a leg, they have five. “

While the shorter races will be better for Bella Mente and the 42-mile race will be better for Comanche and Rambler, Hutchinson said it will be interesting to see how they all match up in the 25-mile race. “They have very good sailors on their boats and we have good sailors too, so when they take a race off us they will have sailed well, and when we take a race off them, we will have sailed well.” Last year Bella Mente was leading when its mast broke on day three. “We feel like we let ourselves down a bit when that happened, so we want to come back and redeem ourselves this year.”

At tonight's opening ceremonies Bruno Magras, President of the Collectivity of St. Barth, shared the stage with Les Voiles de St. Barth officials, including the event's honorary ambassador and French sailing legend Loick Peyron. A minute of clapping (rather than a moment of silence) was observed to honor the inspired life of French offshore sailor Florence Arthaud, who recently died in a helicopter crash.