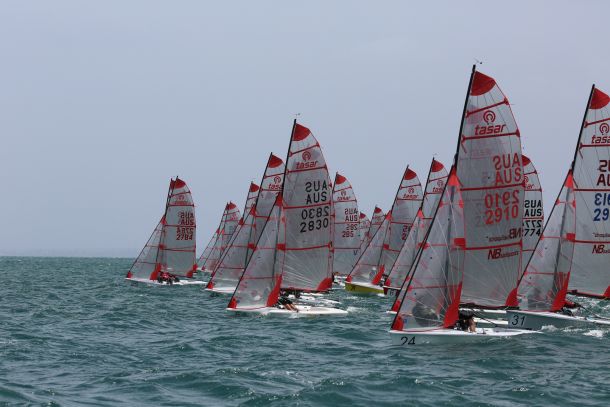 Race one and two of the Tasar 2015 World Championships were held on the afternoon of Sunday 4 January on the waters Geographe Bay, Busselton.

A good start with clear air, and keeping away from trouble at the top mark of the course, appears to be the popular comments from both races.  The wind for both races was a lightish north westerly with less chop than the previous day’s race.

Race two saw James Sly and Chelsea Haynes on “Indecisive” get a good fast start at the port end of the start line which helped them to go on and win the race.  Second place went to Aaron Linton and Jamie Jochheim from Queensland, Australia, on “A Team”.  In third place was Rob and Nicole Douglass from New South Wales, Australia, on “Coolit”.  There were 118 completing this race.

The post race presentations and “Ronstan half hour” with humorous incidents and comments was well received by the big crowd.

The photos are of the race winners.  The next two races of the ten race series are scheduled for Monday 5 January.  Information and results can be found on the event web site www.tasar2015.com .  The event is being hosted by Geographe Bay Yacht Club.