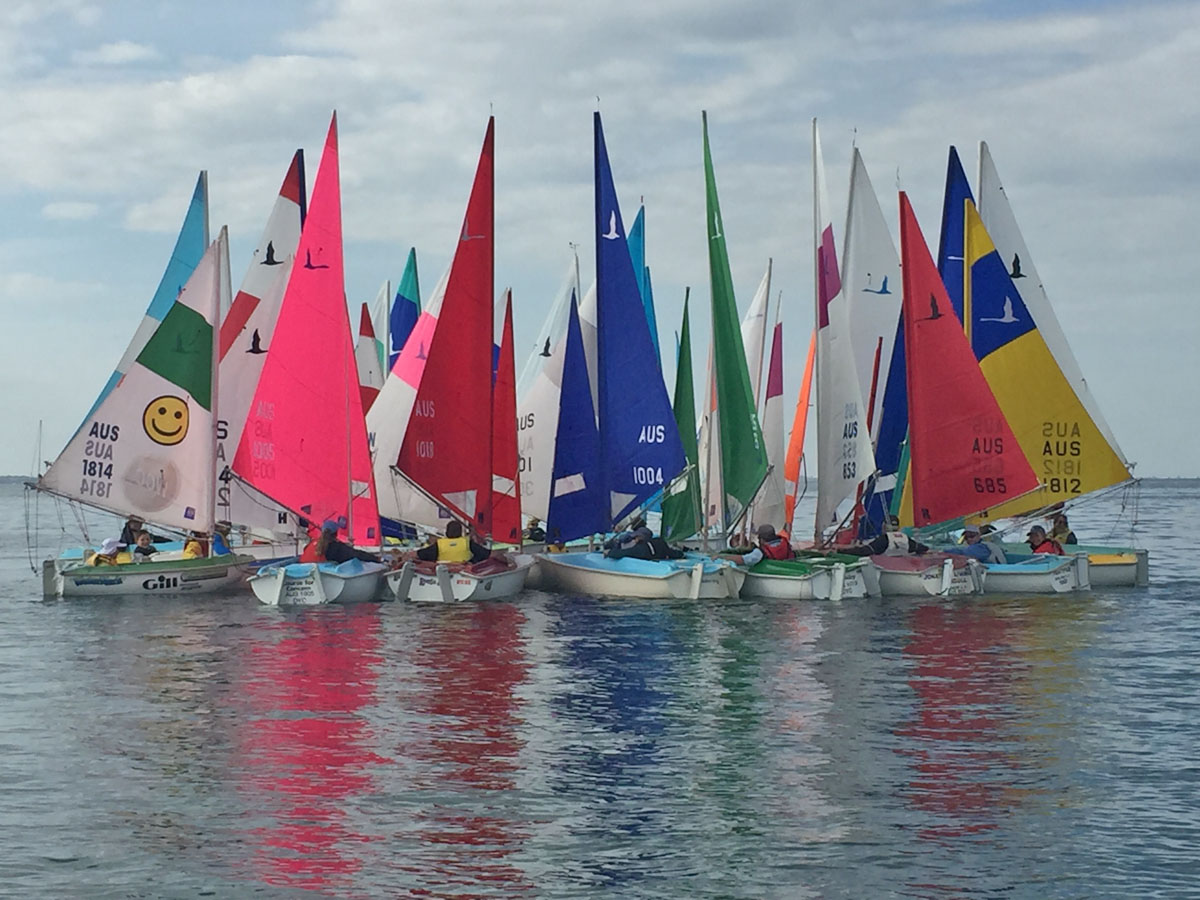 Across the three days of racing, sailors were frustrated by a lack of wind however the four divisions were able to complete their minimum race numbers by Monday’s final session.

The Hansa Class Association is an open and inclusive association that encourages people of all ages and abilities to compete with and against each other and saw sailors gather from around Australia as well as a contingent from Japan and two sailors from Chile.

During the wait for breeze on the second day, sailors formed a spectacular raft-up of 25 boats, with their coloured sails reflecting on the calm waters of Corio Bay.

The final scheduled day of racing again dawned overcast and calm and sailors in the single person divisions were held ashore. When the wind failed to strengthen, the morning session was abandoned, leaving the results as they stood at the end of day 2.

The wind finally arrived in the afternoon and the two-person Hansa 303s were able to get three races in during their time on the water.

Reigning World Champion in the Hansa 303 single person class, Wynyard Yacht Club’s Chris Symonds can now add the Australian and Asia Pacific titles to his resume, taking out the division in front of his Wynyard teammate Mike Darby.

Darby turned the tables in the Hansa 303 two-person division when, with crew Manuela Klinger, he beat home Symonds and his crew, Jeannine Peacock to take the title.

It was a win to the international sailors in the Hansa 2.3 division, with Japan’s Koji Harada handling the light conditions the best, to win the division by 3 points from Royal Geelong Yacht Club’s Allison Weatherly and NSW’s Alyse Saxby.

In the Liberty division, South Australian veteran Bob Schahinger took the win by one point from Ballarat’s Charles Weatherly, with Jason Elwes from NSW in 3rd place. With competitors in every division, Victoria took home the State Teams Trophy.

AHCA President Russell Phillips said: “This regatta has been a success on many levels. Local and international friendships were made and renewed, competitors and their friends and supporters have been made to feel very welcome here and, despite the lack of wind, we have all had a great time in Geelong’.

‘It was great that the tall ship Tenacious was able to support the event and promote inclusion to the people of Geelong”.

“We are very grateful to the support of the City of Greater Geelong, Royal Geelong Yacht Club – their members and volunteers – and Gill Australia for supporting this open and inclusive sailing Championship”.