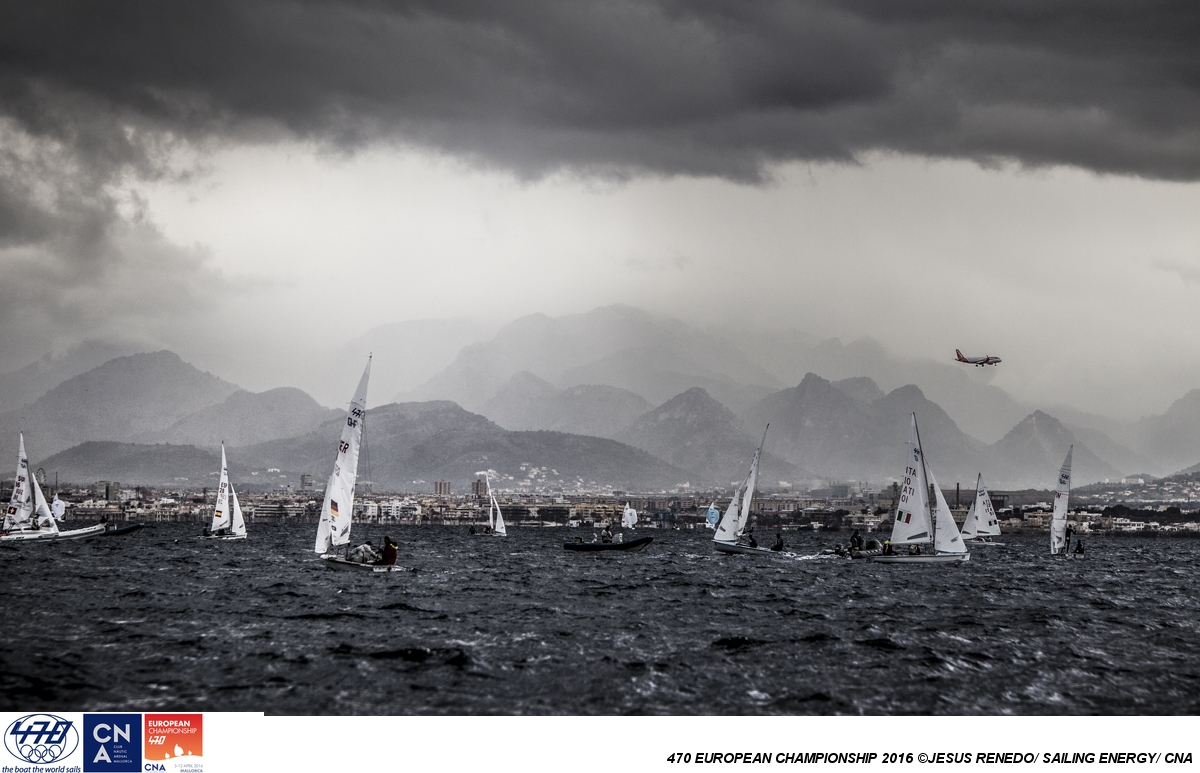 Various storm systems rolled across the race course on Friday, forcing postponement on the water, as the breeze swung to the west, rain filled in, visibility dropped and the breeze kicked up.

Challenging conditions by anyone’s standards.  A cold, damp and dreary day could not quash the spirits out on the race track on day 2 at the 2016 470 Europeans.

Race 3 in the 470 Women yellow and blue fleets got underway, but was abandoned due to the shifty breeze. With no improvement in conditions expected for the next couple of hours, the Race Committee sent fleets ashore in the hope that the weather would improve later in the day. By the time sailors had warmed up back at Club Nautic Arenal, the Race Committee confirmed racing was a “no go” just before 1600 hours.

Russia’s 470 teams have not appeared on the international racing circuit since the 2015 470 World Championship in Israel. They face a challenge not encountered by many, as visa requirements and travel restrictions limit time spent abroad. Balancing race and training programmes within this calendar is critical, and so far this year focus has been on training at the team’s winter sailing ground of choice in Gran Canaria.

“It was really good as we spent three months training in Gran Canaria,” explained Alisa Kirilyuk, Russia’s nominated Rio 2016 470 women helm. “In Russia we need visas and we only have 90 days per six months, so it is very difficult to train in different countries. We can’t always train in Sochi as there is not much wind.

“It was really good the three months training with the whole Russian team. We don’t always need to be racing and we have made some really good steps in technique, manoeuvres, starts and close boat on boat tactics. But, also it is not so good to be such a long time without big fleet racing.”

Kirilyuk and crew Liudmila Dmitrieva notched up one of their best international appearances at last week’s Trofeo Princesa Sofia, finishing 11th overall. They opened their assault on the 470 Europeans with an 18,4 scorecard, and are on mission to match or better their previous European Championship career bests of 10th overall in 2013 and 2014.

“We are good as a team,” voiced Kirilyuk, “and it is really good that we are now training with the men’s team very closely and have also involved the younger guys in our training programme. There are no secrets between us, we work as a whole team.”

As their countdown to Rio edges closer, preparations escalate with equipment transport being the first priority.

“Firstly, we just hope that the boats will make it to Rio from Russia,” laughed Kirilyuk with a hint of nerves. “The boats will be shipped in the middle of May and we will arrive in Rio in early July for training. There will be a coaches’ regatta in mid-July, so we will do that and perhaps come home.”

Time out is as important as time on the water and guaranteed to optimise performance.

“It is very important to have a break. You can’t only train. Your body and mind need relaxing of everything. It is really important to go home and see your family and see different faces,” said Kirilyuk. “We hope to go home for 10 days and then back to Rio.”

“My family are all sailors and they are often helping us, so they all know what we are doing!”

RACE WITHIN A RACE FOR NATIONAL SELECTION

As the fleet frontrunners and Olympic campaigners mix it at the front of the fleet, it is a race within a race for many. There are numerous teams for whom the 2016 470 Europeans marks their last chance to impress the powers that be and meet their national selection criteria for Rio.

Nations yet to declare their final 470 Olympic teams include Australia, Canada, China, Germany, Great Britain, Greece, Singapore, Spain, USA. Some will know their destiny by the conclusion of the 470 European Championships, whilst for others the national selection journey continues onto the final two events before the Olympic Games, Sailing World Cup Hyeres and Sailing World Cup Weymouth and Portland.

Germany’s Ferdinand Gerz/Oliver Szymanski qualified their nation to the 2016 Olympics at last year’s World Championship, and must now maintain nerves of steel as they seek to deliver the performance of their lives here in Palma.

“It’s not done, our last trials is the Europeans,” said Gerz. “The events were Europeans last year, Worlds last year and the 2016 Europeans. We have to meet criteria made by the German National Olympic Committee, which should be OK, but we need a reasonable result in Palma. We have to be in the top 10 nations after the three events.”

Securing national selection and making the gold fleet cut is the target for many, but for the “next generation” making their debut appearance at a 470 Championship, ambitions are somewhat different.

Japan hosted and won the 2015 420 World Championships and gold medallist Daichi Takayama has lost no time in stepping to the 470 Class as he prepares for Tokyo 2020. Yesterday, racing at their first ever 470 Championship, eighteen year old Takayama and his twenty year old crew Naoya Kimura outpaced Japan’s Rio 2016 Olympic team of Kazuto Doi/Kimihiko Imamura. They ended the day in 29th overall, compared to the Olympic pairing’s 53rd place scorecard, as the raw talent of youth continues a tradition of delivering awesome results, free from the pressure of performance expectations.

Japan is well ahead on its succession planning for a home nation Olympic Games in the 470 women too, with young protégés Akiyo Yamaguchi/Eri Hatayama. They finished 10th at the 2015 470 Europeans, but will have their work cut out tomorrow to upgrade through the fifty-seven boat fleet and qualify to gold fleet racing from their position of 38th overall.

420 World Champions in 2014, Jose Manuel Ruiz/Fernando Davila of Spain, also sit on the cusp of gold fleet qualification in 35th overall. They must finish no lower than 29th after tomorrow’s two races to secure a gold fleet slot. Hippolyte Macheti/Sidoine Dantes (FRA) claimed the silver medal behind the Spanish in 2014, but so far have the upper hand in 28th overall.

Twenty-one year old Australian Carrie Smith won the 2013 ISAF Youth Worlds, and similar to many others racing at that year’s Championship is racing for her Olympic dream with crew Jaime Ryan. Ella Clark, Smith’s crew in 2013 is gunning for the same dream, with helm Sasha Ryan, sister of Jaime. Hard to be friend and family, knowing only one Australian team can make it – but that’s the reality of sport.

As a true “racers’ boat” the 470 entices a hotbed of young sailing talent. A big attraction is the 470’s accessibility and ease of transition from junior classes, although mastering the class takes a lot more time and dedication. Whatever future their sailing careers follow, these young sailors know their experience in the 470 class will put them ahead. The range of sail and rig controls allows the 470 to be tuned to obtain optimum performance in a wide range of conditions and develops tuning, tactics, strategy, technique and boat handling skills; all fundamental to sailing in the widest context.