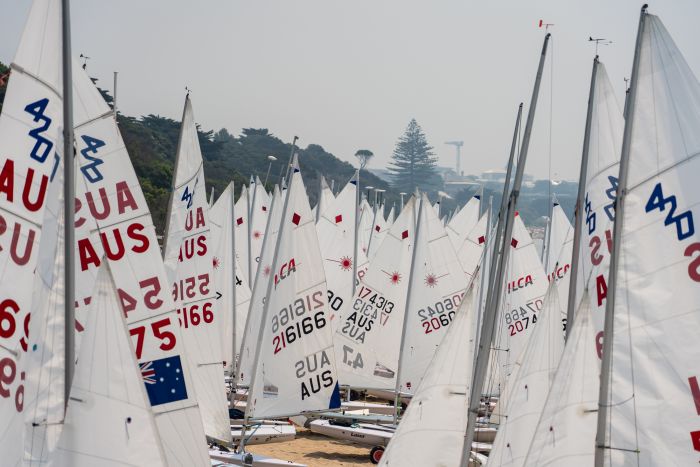 Racing was abandoned due to poor air quality and low visibility from the bush fires along with light shifty wind on day three of the Youth Championships at Sorrento Sailing and Couta Boat Club (SSCBC).  After waiting five hours for conditions to improve, a cheer went up from the competitors when it was announced racing was abandoned.

Principal Race Officer David Brookes explained the impact the fires were having on conditions, “There are two factors here: air quality and visibility”.

Australian Sailing Regatta Manager Lesley Fasala said safety was their top priority when making decisions.  “Air quality was impacted by the easterly winds from the bushfires,” Lesley said moments after racing was abandoned.  “The EPA air quality was at the upper end of the Poor rating.  While we are aware of the sailors we already know have asthma or health issues, we also have to consider some people may have adverse reactions that we don’t know about.”

Coaches were happy to get there sailors back home to rest after the long day.  “We want fair and safe racing,” Olympian and Head of State Coaching in Victoria Carrie Smith said. “As unfortunate as it is with the conditions we had today, we just want to go out there and have the best sailor win.  If today has to be cancelled it just puts more pressure and intensity into tomorrow’s racing.”

New Zealand Int 420 team sisters Keira and Leah Sinton were relieved when the decision was made to abandon.  “It would have been nice to get some racing in today but we can understand why the race committee made that decision,” Leah said as the two of them derigged their dry boat.  “In the end it was probably for the best after we were held on shore for such a long time.  I think everyone had relaxed.”

“The energy was just gone so there was no point in sailing because I was so relaxed after all that time on shore,” Keira added.

Leah agreed.  “You show up and you’re all ready to go and then you get held on shore for hours.  You end up chilling out a bit too much.”

Brooke Wilson (NSW) in the Laser Radial class was disappointed but looking forward to tomorrow, “I was hoping to get back out there.  I guess we just show up again tomorrow and try again.”

To help raise funds for the Red Cross Disaster Relief and Recovery fund, we will be hosting a fundraising auction in conjunction with the Sorrento Sailing Couta Boat Club at the closing ceremony of the 2020 Australian Youth Championships tomorrow afternoon. Prizes for the auction include generous donations from the Australian Sailing Team, Australia SailGP Team, Sorrento Sailing Couta Boat Club, Zhik and Ronstan.