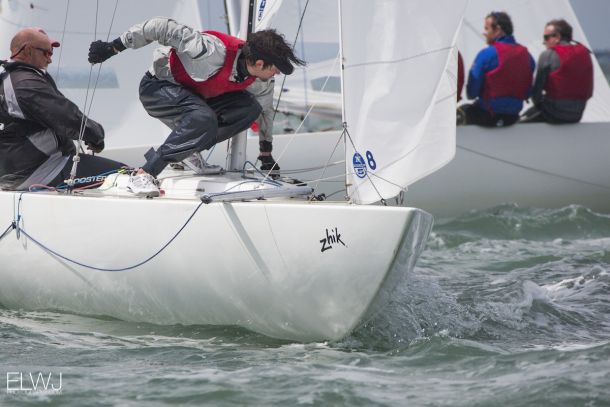 Cowes, UK, August 4, 2015 – The penultimate day of the Etchells Invitational Regatta for the Gertrude Cup dawned bright and sunny, with a brisk south-westerly breeze averaging 18-22 knots, with stronger gusts and a forecast for the wind to continue to strengthen.

Principal Race Office Phil Lawrence initially kept competitors at the dock for an extra 30 minutes while he checked out the conditions on the race course, where he found a more agitated sea state than might have been predicted for the wind with tide conditions. At the same time the breeze had been building, with a mean speed of 22 knots and gusts already hitting 28.

Although the decision to abandon racing for the day was a marginal one, it’s one that competitors fully understood. Neville Wittey, a crew member of Jeanne-Claude Strong’s team from the Royal Sydney Yacht Squadron, summed up the thoughts of many in saying: “I wouldn’t want my own boat to be in other people’s hands in spirited competition in these conditions.

“This was our favourite regatta last year,” Wittey, a former Olympic sailor and three times world champion, continued, “that’s why we returned this year – it’s definitely worth the effort of the travel.”

The first two days of racing have shown this to be a tight and high-scoring event, in which more than half the fleet still stands a chance of finishing the regatta on the podium. The decision to cancel today’s racing leaves the overall results hanging on the final day, for which four races are now scheduled.

Currently only five teams are counting a clean score of top 10 results and so far there have been four different race winners. Only Mark Thornburrow of the Royal Hong Kong Yacht Club and Chris Hampton’s team from the Royal Brighton Yacht Club in Melbourne, Australia have won two races. In all, nine of the sixteen teams have achieved at least one podium result to date.

Thornburrow currently leads the fleet, with 13 points, with Tom Carruthers of San Diego Yacht Club second on 16 points. Jeanne-Claude Strong of the Royal Sydney Yacht Club is third overall on 22 points, with the next three teams within just five points of her score.

The social aspect is also a really important part of this regatta and tonight sees a gala dinner at the Royal Yacht Squadron. “The atmosphere at this event is absolutely great,” adds Wittey. “Everyone is together for drinks after racing and for a meal in the evening. We’ve been catching up with old friends that we’ve not seen for a long time, as well as meeting lots of great new people.”

This unique regatta sees 16 of the world’s top sailing teams, from 10 countries spanning four continents, gathered in Cowes to compete for the 141-year-old Gertrude Cup. Competitors include multiple world champions and America’s Cup sailors, as well as successful match racers from the world arena.

Boats are provided to competitors, thanks to the generosity of their owners in the Cowes Etchells fleet, and are fully prepped and maintained during the event, including on water support. To help make the fleet as closely-matched as possible, all boats have identical sails that were cut from the same cloth by North Sails.

Competitors change boats each day, which helps to maintain a level playing field, while at the same time providing an unusual challenge for those more accustomed to fleet racing than match racing. “I love the concept of changing boats each day,” says Chris Hampton of the Royal Brighton Yacht Club in Melbourne, Australia, who is currently lying fourth overall. “It has forced us to sharpen our skills and we’ve got better at bringing different boats up to speed in a short timeframe.”