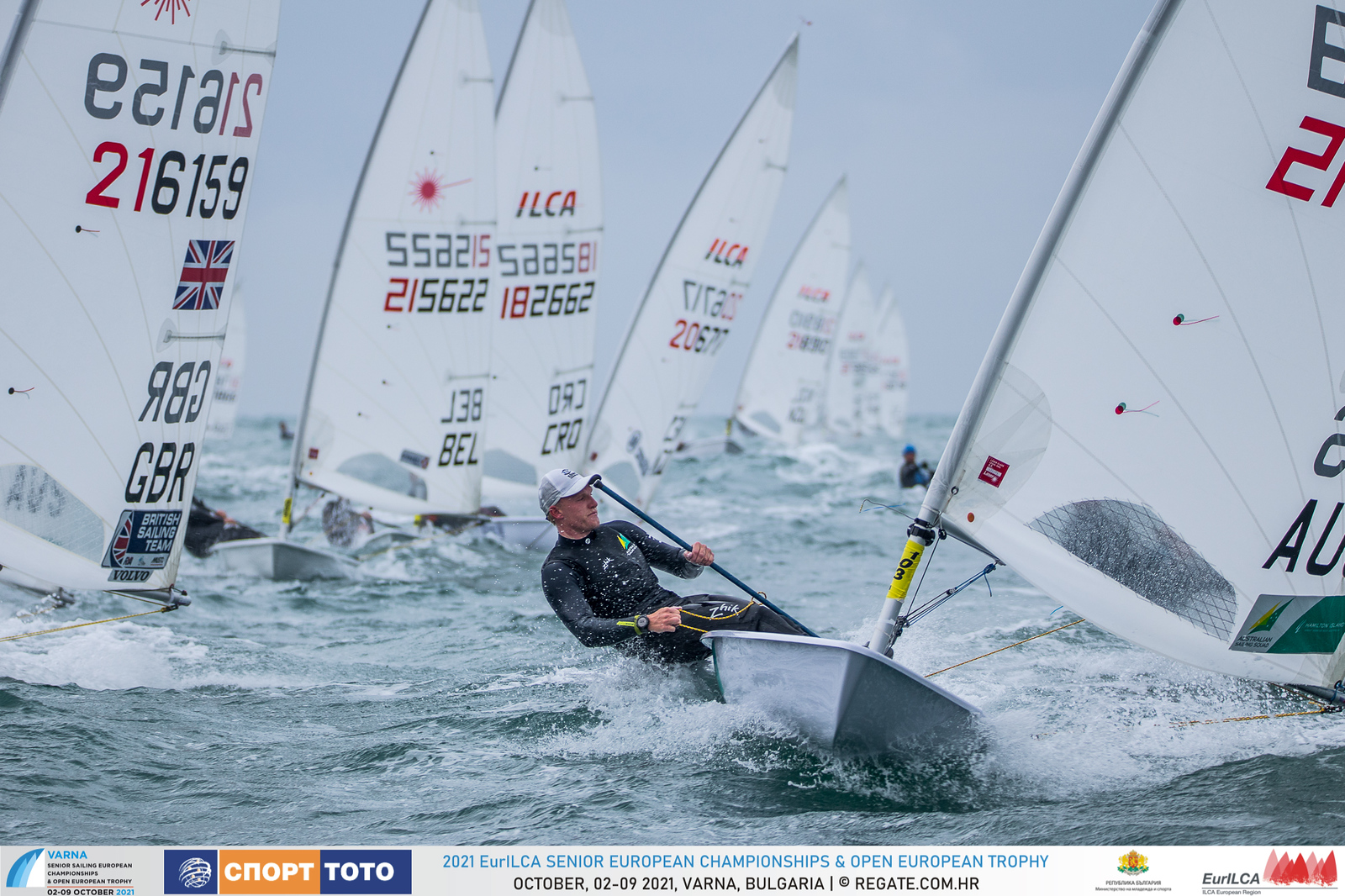 Day five finally gave the sailors what they had been waiting for at the 2021 ILCA Senior European Championships in Varna, Bulgaria, as strong winds and a big swell ensured the three scheduled races were completed for the Men’s Laser two for the Women’s Laser Radial.

Young West Australian, Ethan McAullay, was the best of the Aussie sailors on the second day of Gold fleet racing in the Laser class. The Royal Perth Yacht Club athlete came home with a pair of fourth places and a sixth to shoot him up to 15th in the overall rankings.

With just one day of racing to come, two other WAIS athletes find themselves fighting it out for positioning in the top then after they were greeted with shifty and gusty 12-20 knot winds today. Zac Littlewood is currently in eighth overall and Luke Elliott is sitting in ninth with two races to go for the Laser.

After being based in Australia for the past 18 months, Elliott shared: “The biggest adjustment has probably been getting used to doing six days of racing in a row again. I had kind of forgotten just how long it feels when you do an event, so getting used to that again is great.”

It was a mixed bag for the Australian entrants in the Laser Radial fleet. Matt Wearn, who is stand-in coach this week, is hoping it will set them up for their World Championship in early December in Oman.

“The squad is just lacking some racing experience,” Wearn commented. “The sailors are starting to find their feet and can get off the (start) line well now, which is resulting in some decent scores.”

Melbourne-based Radial sailor, Casey Imeneo, enjoyed the conditions on the Black Sea overnight with a 29th and a seventh in the two races sailed.

“We had some solid breeze on the course, big waves and some rain to keep things feeling like being back home.” Imeneo said.

Imeneo also sees this as an opportunity to check in with the fleet and improve before the peak event later this year. She elaborated “it’s been great getting back in touch with the international fleet again and refining processes towards the Worlds come December.”

Zoe Thomson struggled, but again knows this is a long game towards Paris 2024.

“I found it pretty challenging, in particular the starting and first upwind strategy with 80 boats,” Thomson said. “I have found myself tangled up in a bit of congestion more often than not, so it’s all in good preparation for the Worlds next month.”

The Australian Radial squad will remain in Europe to continue preparations for the World Championships later this year. This will include training camps with the competitive European fleet before heading to Oman in late November.

Two races are planned for both fleets on tomorrow’s final day of racing, where the sailors will be once again hoping the weather plays ball.