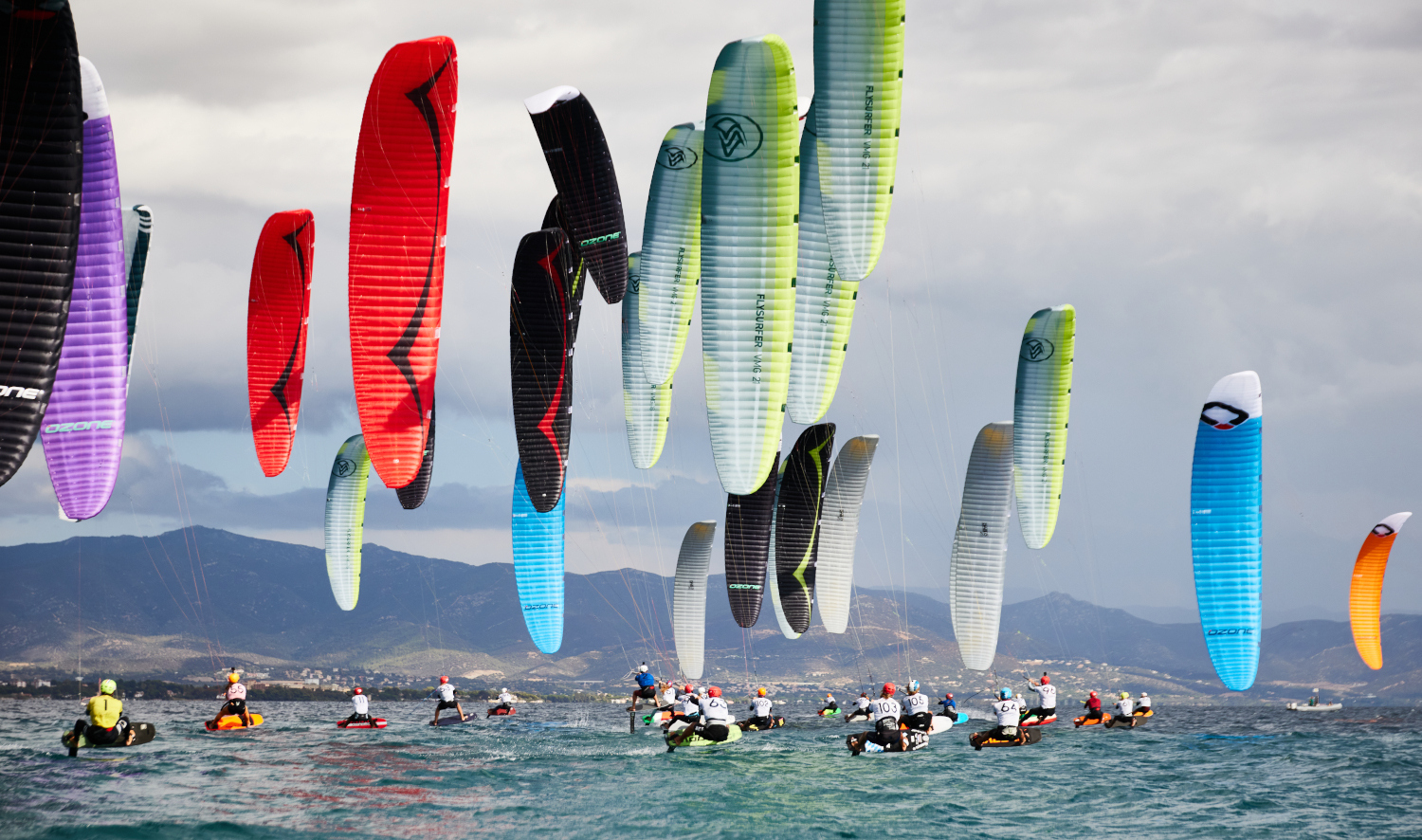 By the time Britain’s Connor Bainbridge dons his competition shirt on the final day of racing at the KiteFoil World Series Cagliari, he will have had the dubious honour of having worn all three of the leaders’ coloured jerseys, such is the intensity of the battles on the water.

On the penultimate of four days of spectacular racing on the strikingly beautiful Gulf of Angels track on the Italian resort island of Sardinia, the Briton’s performance in the day’s four races was enough to move him up to second place overall.

Bainbridge began the day on his 21m kite, in the 10 knots sea breeze blowing over the Devil’s Saddle headland, to the right of the course. But by the third race in keenly fought contests with the French duo of Axel Mazella and Théo de Ramercourt, the Briton went down to his 15m kite as the breeze picked up to 12kts.

“To be honest it’s been a bit of a mixed bag for me,” Bainbridge said. “My aim was to stay consistent. But so far I’ve been through the yellow shirt of the leader and the red of the third placed rider. Tomorrow I’ll be in blue that signals second place.”

On day three of the regatta, De Ramecourt also moved up the standings to third place, after searingly-fast racing on his 21m kite in all four races. He recovered from a tangle at the start of race one, going on to collect two subsequent bullets and a third place.

“I was happy that I managed to make the top 10 in that first race after the tangle,” De Ramecourt commented. “Then I got two bullets. I managed to read the wind shifts and use the gusts, so I was pleased. I forced myself to stay on my 21m registered kite in practice for the upcoming Worlds.”

Still, despite the turmoil on the leaderboard below him, Mazella was an island of calm precision as he retained and extended his overall lead with two bullets and two seconds as he hunts down victory and a share of the €25,000 prize pot.

Remarkably, 16-year-old Italian Riccardo Pianosi almost robbed Mazella one of his bullets in the dying and increasingly shifty breezes of the day’s last race. Pianosi led at the first top and bottom marks of the two-lap, windward-leeward course, but was just overhauled by Mazella on the second upwind leg.

“I had a 100-metre gap on Axel Mazella,” Pianosi said. “I was ahead at the top and bottom marks. But he read the wind shift on the upwind leg and I didn’t see it. He’s an animal; a monster on the track.”

If anything, the racing among the women, racing in one fleet with the men, was even more turbulent. With two high-placed finishes, France’s Lauriane Nolot moved past countrywoman Poema Newland in the standings.

But Nolot and Newland failed to complete the day’s last race. Newland had also got in a tangle with Italy’s Tiana Laporte in the first race, though both were able to recover and finish. Laporte is a kitefoil racing novice and relished the second place finish she managed among the strong French women’s squad.

“I’ve been kiteboard racing for just a year,” said Laporte, 25. “But I’m doing all the regattas I can. Kiteboarding is a passion and my dream is to go to the Olympics. I’m addicted to speed. At first it was a bit of a rollercoaster as I didn’t really know how to manoeuvre well. But it’s great. I love it.”

The Czech Republic’s Vojtech Koska, 16, is another young athlete cutting his teeth at the top level at the World Series Cagliari, his first big competition. The lure of an Olympics’ berth on his national team pushed him to take on the challenge.

Koska has been kitefoil racing for just a year and began his journey at the Formula Kite Youth Worlds in Gizzeria in July, where he placed a creditable 15th overall. The Czech teenager was up against stiff opposition that included the likes of winner, Max Maeder (SGP), who went on weeks later to become European champion at 15.

However, Koska has already tasted victory with a win at a major open kitefoil racing event just a week ago in Greece, while he attends school at the World Class Kiteboard Academy that combines academic study, athletic achievement and travel.

Koska, who began kiteboarding at the age of nine, had spent the past two years on the Canary Island of Tenerife where his passion was freestyle and “big air”. But when kitefoil racing got its place in the Olympics, debuting in the Paris 2024 Games, Koska made the switch.

“I decided to change to kitefoil racing because of the Olympics” he said. “I saw much more potential in racing than freestyle. Right now, I’m trying to get as much experience, as fast as possible.”

Koska and his parents have been in discussions with the Czech sailing federation and already get a little financial backing to help him compete and grow. But for now, the veteran racer from Russia, Ivan Doronin, has been coaching him.

He has been learning fast. On the first day of the World Series Cagliari, in gnarly conditions when the offshore Mistral breezes hit 33kts, Koska was in his element. In one race on day one he managed to place 11th battling the world’s best, though the lighter more technical conditions of day two were less to his liking.

“This is my first big competition,” Koska explained. “The first day was good for me. I like the stronger wind, which I’m used to from Tenerife. The second day was harder. For me now, it’s all about understanding what the others are doing so that I can improve. The starts are difficult. Being in the right place on the line and not getting in a tangle is tough. But it’s great experience.”

Forty-two athletes -29 men and 13 women from 19 countries and five continents- are battling in the World Series’ third act in Cagliari. The International Kiteboarding Association (IKA) KiteFoil world champions will be crowned at the close of the slated five stops.