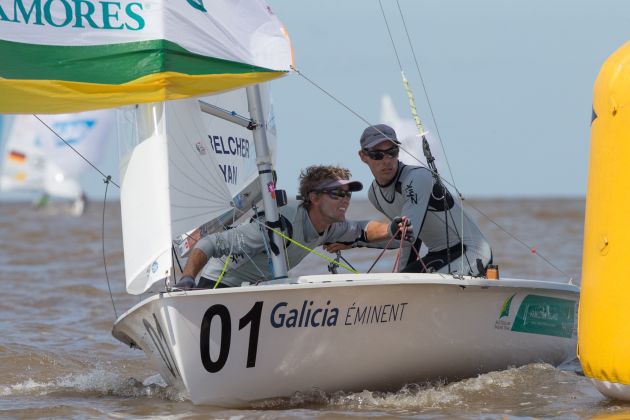 Defending World Champions Mat Belcher (QLD) and Will Ryan (QLD) claimed a race win in the one and only race of day two at the 2016 470 World Championships in Buenos Aires, Argentina to jump up the ranks from 33rd into 11th. With this result Mat Belcher and Will Ryan move on from yesterday’s (Monday, 22 Feb local time) UFD penalty and double-digit result and a start of the event that they would rather forget.

The three-time World Champion pair showed their experience and mental resilience on Tuesday, 23rd February to lock in the race win and change their scoresheet for the better. After the fleets had a late start waiting for the breeze to fill, only one race was completed.

“We managed to get off the line well and sail our own race. We were really happy with our performance and are now slowly trying to crawl our way back up to the top. It is really tight racing so it will be a long week for all,” Mat Belcher said at the end of a long day.

And about the challenging conditions he added: “Once again it was a long day on the water. They delayed the start until two p.m., but unfortunately could not start until five p.m. in a slowly building sea breeze. It was pretty light, around four to six knots with over a knot of current and a lot of weed in the water.”

Sailing out of Club Nautico in San Isidro and on the Rio de La Plata the silt from the delta turns the water brown, making it very hard to physically see the breeze on the water and to see where the breeze will come next.

In addition, the water is quite flat with more than one knot of current and a lot of weed at the moment, which makes racing complicated for the crews trying to not run over anything.

A total of three Australian Sailing men’s crews are competing in Buenos Aires with Australian Sailing Squad’s Patrick and Alexander Conway (NSW) posting a 21st and Victorians Tom Klemens and Tim Hannah a 28th to finishing day two in the Men’s 470 fleet in 25th and 34th respectively.

In the women’s fleet Australian Sailing Team’s Carrie Smith (WA) and Jaime Ryan (QLD) climbed up one spot into overall 16th after posting a 19th in Tuesday’s racing. Sasha Ryan (QLD) and Ella Clark (WA) finished right behind them in 20th and after a UFD on day one move up into 23rd in the 39-boats fleet.

In other World title events, two days have been completed at the 2016 RS:X Men’s and Women’s World Championships in Eilat Israel with Australian Sailing Squad’s Joanna Sterling (QLD) ranked 32nd after posting a 15th and 13th on Tuesday.

After light conditions on both days only four races have been completed out of the six races planned, which wraps up the qualification races. Wednesday, February 24, 2016 will be a rest day.