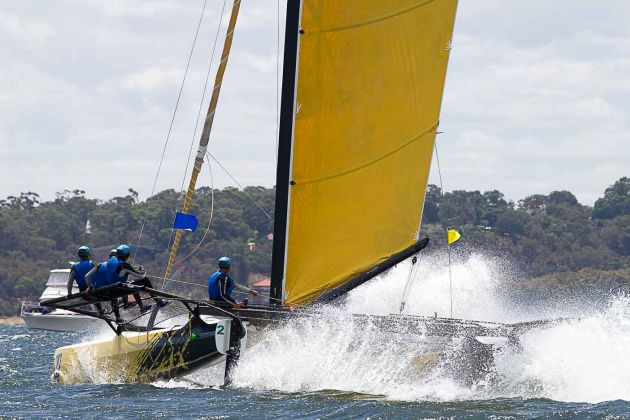 Bearaways were dicey in the strong afternoon sea breeze

In a day of stark contrasts, the M32 catamarans of the World Match Racing Tour made a spectacular debut on the Swan River in Perth. Competing for the South of Perth Match Cup, eight teams started the regatta in a light and shifty south easterly which later gave way to a solid sea breeze.

It took no time for teams that had been practicing to work out that in light conditions, the gennaker could be a valuable upwind tool, sacrificing a little height for significant gains in speed. Some crews partially rolled out the furling gennakers for turning the yacht through tacks.

A lull in the breeze gave teams the opportunity to have an early lunch and wait for the Fremantle Doctor, the local sea breeze. The Doctor hit the course at around 18 knots and freshened later, so the race committee’s immediate response was to instruct boats to put a reef in the main.

Bearaways in the strong breeze were spectacular. Crew weight became a critical issue as the leeward bow dug in. Most got it right, throwing all the weight into the back corner and then shifting them forward again as the boat settled, but in the blustery conditions it was almost inevitable that the first capsize in M32 competition should occur. Will Boulden took that honour, burying the bow rolling the yacht onto its side for the first capsize of the series.

In some respects, it was a good opportunity to test recovery procedures. An immediate head count ensured that no crew was missing or hurt, the capsize cord was released quickly and the recovery by a safety boat put the cat back on its feet in very little time. Within seconds of the incident, three safety boats were on the spot to take control, one with a fully kitted diver on board if needed.

Local ace and former 29er world champion Steve Thomas headed the leader board with four wins from as many starts, Denmark’s Joachiim Aschenberger and New South Welshman Evan Walker were tied on three wins from four starts and Brett Burvill rounded out the top four with two from four.