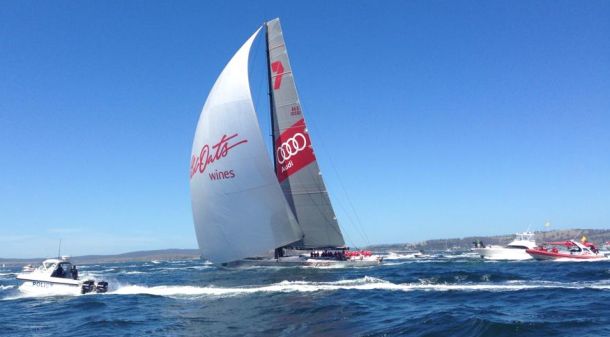 Wild Oats XI surrounded by media and spectator boats as she sails up the Derwent. Photo Kimberley Wilmot.

The Supermaxi's are coming to Transpac 2015, and they are on the hunt for new records. With Roy Pat Disney's Pyewacket team and Bob Oatley's Wild Oats team partnered together to push the Reichel/Pugh 100 Wild Oats XI to Hawaii, and with Syd Fischer and his Ragamuffin 100 coming back from their appearance in 2013 to do the same, the Transpac monohull record time of 5D 14H 36M 20S set in 2005 by Alfa Romeo is now under serious threat.

Having won the Sydney-Hobart Race eight times and having the current course record for that race, Wild Oats is no stranger to first-to-finish performance. She has been re-fit for Transpac: a ton lighter, with 400 kg less in the bulb and horizontal hydrofoil removed, she is in optimal Transpac trim. She is shown at left being loaded for the trip to LA before being moved to San Diego for preparation for the race.

The Barn Door record time is also at risk: Manouch Moshayedi from Newport Beach, CA is entering his newly-renovated Bakewell-White-designed Rio 100 to challenge Dave and Peter Askew from Baltimore, MD on their Reichel/Pugh 74 Wizard, who as Bella Mente in 2011 set the existing record time of 6D 19H 44M 28S. Both are shown at right prior to the March race to Cabo.

And there is yet another record at risk too: Renaud LaPlanche & Ryan Breymaier are returning from their 2013 effort with the 104-foot long, 75-foot wide Lending Club 2. Defeating the multihull record of 5D 9H 18M 26S set in 1997 by the 86-foot catamaran Explorer would mean sailing the course at an average pace of better than 17.2 knots, something that should not be too hard, considering their recent record set from Newport to Bermuda averaged nearly 10 knots faster.