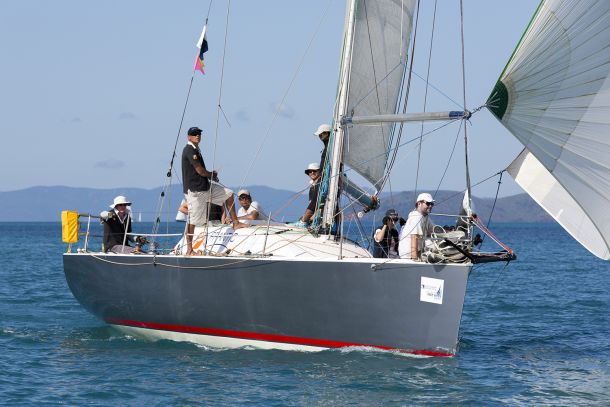 Frantic’s skipper Brian Pozzey says the entry is the result of his own bucket list and the crew’s preference for some warm weather racing at a quiet time of year, in terms of the boat’s regular program out of the Royal Queensland Yacht Squadron. “We were toying with a couple of ideas. We may come down before Christmas for some cruising in my old stomping ground of Pittwater and up the Hawkesbury River, then be in Sydney Harbour for New Year’s Eve, and then get ready for the Coffs Race.

“I was born in Coffs Harbour and still have ‘rellies’ there. Warm weather racing is very attractive. We decided not to do Hobart this year – I don’t want to be cold and wet anymore.”

Furtado bought the Sayer 40 Frantic late 2013 and ordered some major renos to bring it up to peak working order. The boat’s been racing out of RQYS since part way through last season and with a new suite of sails and the crew up to speed is about to commence the 2015-16 season with gusto.

“It’s a downwind boat, very lightweight and Coffs is traditionally an upwind race. Still, we are looking forward to it. I’ve sailed in and out of Coffs Harbour many times but never done the race. It’s always been on my bucket list,” Pozzey added.

Pittwater based Darren Drew is working hard to entice a number of Queensland based multihull owners south to join the NSW fleet, and make up a decent division for the 226 nautical mile coastal sprint conducted by the Royal Prince Alfred Yacht Club at Newport on Sydney’s Northern Beaches.

Drew’s hoping his Crowther 50 catamaran Top Gun, bought late last year and a Coffs Race debutant, is one of six to eight multihulls the spectator boat flotilla will farewell on January 2, 2016 from the northern side of Barrenjoey Headland.

The skipper’s not adverse to an upwind race in the likely summer nor’easters: “Top Gun’s so bloody big it just powers to windward. It’s amazing in 20 knots and we are not against an upwind race, particularly against Chris Williams’ Morticia.”

Southport Yacht Club on Queensland’s Gold Coast recently announced an extension to the annual Club Marine Pittwater to Coffs Yacht Race. Competitors in the 35th event are encouraged to compete in the Coffs to Paradise race starting January 7, then SYC’s signature regatta for the summer season, Sail Paradise.

Owners entering the 2016 race to Coffs can look forward to the same simple and streamlined online entry process and can choose to enter a monohull and be scored under IRC, ORCi, and PHS handicap systems, a multihull (OMR) or the short-handed division.