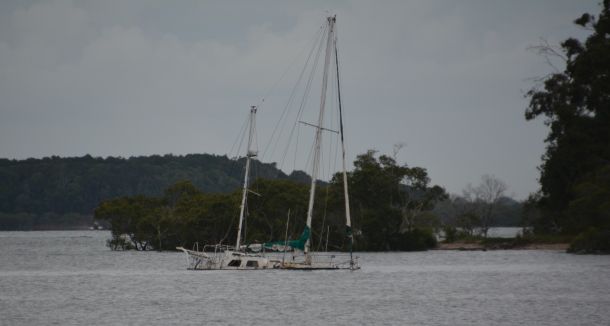 The state government’s campaign to rid Queensland’s coastline of derelict vessels has moved into overdrive in recent months on two fronts – the present and the future.

On the present front Maritime Safety Queensland (and, in some cases, the owners of vessels we identified as unseaworthy) are removing them from our waters, beaches and mangroves by whatever means possible.

Wrecks around our coastline are being hoisted in slings, broken up by heavy machinery, loaded on to trucks and taken away either in whole or, if necessary, in pieces. In one case, a wreck was even airlifted by helicopter (see the video here) as we’ve used the War on Wrecks fighting fund to rid our coastline of unsafe eyesores.

So far, we’ve removed 111 wrecks and have plans in place to remove 77 more, while it is also pleasing to note that owners have removed 42.

There is a total of 240 more identified wrecks on which to take action, so the body of remaining work is considerable.

But this work, although important, is merely excising the symptoms of a waterways health problem. On the 'future' front, the War on Wrecks Parliamentary Taskforce has prepared its report to Government on how to treat the underlying causes of the problem.

In doing so the Taskforce has been looking at these underlying causes in an attempt to avoid further problems with wrecks in the years ahead, based on research and public consultation it has undertaken since September 2018.

This is important because statistics held by Maritime Safety Queensland indicate that the age profile of Queensland’s fleet is such that, if we do not intervene, the problem will resurface with a vengeance in the near future. More than 20% of our registered fleet of 260,000 vessels is over 50 years old, while only 16% were manufactured since 2010.

That represents a worrisome number of vessels heading into their twilight years!

Like many things in life, when it comes to derelict vessels prevention is better than cure.

With this in mind, the Taskforce's report will no doubt grapple with a number of issues that became apparent during its consultation and research that have been a cause of vessels becoming derelict or that have led to unsafe practices on our waterways. These include vessel maintenance, licensing and registration issues, as well as waterways management and how to foster a more informed and responsible boating culture.

We now look forward to the final report, to which the government will respond. Whatever the outcomes of government’s deliberations on the report, Maritime Safety Queensland will consult thoroughly with the public in implementing recommendations.

In the meantime, Maritime Safety Queensland and the War On Wrecks Taskforce would like to thank all of those Queenslanders who attended the taskforce’s public consultation sessions or responded in other ways to our requests for assistance. Your help has been invaluable.